We always dreamed about flying our own plane to Alaska to see for ourselves if the stories and pictures are true. Do bears really eat airplanes like the photo of the plane that flew home covered with rolls of duct tape after a bear had it for dinner? Is Mt. McKinley as treacherous as author James Greiner describes in “Wager with the Wind,” a true story about the life of iconic Alaskan bush pilot Don Sheldon?  Can you really see Russia from Sarah Palin’s backyard in Wasilla? Does it stay light nearly 24 hours a day in July? After a year of preparation, purchasing bear spray, mosquito head nets, readying all our camping gear, and wearing a special vest with every possible piece of survival gear, on July 11, 2018 we were off to Alaska in our Sportsman, which we felt would be more suitable than our Van’s RV.

We camped the first night at one of our favorite airport campgrounds on Orcas Island, Washington with a 10-minute walk to great dining in the town of Eastsound. Day 2 we filed and activated all the bureaucratic procedures to cross the border into Canada and clear customs at Prince George. Although we filed IFR in the US, we decided ahead of time to only fly VFR north of the Canadian border due to unfamiliar procedures and terrain, potential icing, plus wasn’t the purpose of the trip to check out the flora and fauna?

We followed the inland “trench” route instead of the coast route because it seemed to have a higher survivability quotient if weather or mechanical issues arose. In Canada, every flight requires a flight plan which must be opened and closed, although one gets the feeling it is not too closely monitored. For the most part we followed the Fraser River “trench” to Watson Lake, where we were the only airport campers other than the mosquitoes! We quickly learned how to eat our K-rations with nets over our heads.

Onward, we followed the Alcan highway to Whitehorse, where we rented a car, camped, then drove to Skagway, Alaska in horrible weather, did some beautiful hiking in a 50-knot wind, explored the one-block “city,” rode the White Pass and Yukon Route Railroad which followed one of the gold rush routes to the Yukon, and forewent two nights of freezing camping for a warm hotel and B&B (big bucks but good for the relationship).

Back to Whitehorse to explore the Yukon River waterfront then in the air—destination Dawson City, the epicenter of the Yukon Territory gold rush. Did I mention the weather changes rapidly the further north you go? We are used to 3-, 5-, and 10-day forecasts. In Canada and Alaska, they have a 5 minute forecast known as “LOTW” (look out the window). Anyway, 50 miles from Dawson City, we were finally able to make radio contact to discover the airport just closed due to weather. They called around and gave us the only VFR airport within 50 miles where the airport radio operator was kind enough to track down the fuel lady who arrived in an hour to refuel us, then in another hour the radio operator informed us Dawson City had reopened and away we went.

Dawson City is a must see for its rich gold mining history, dirt streets, Diamond Tooth Gertie’s “Can-can” show, re-enactment tours, hiking, museums, etc. Since the “city” was 10 miles from the airport with no rental cars, we called and found a hotel with shuttle service to the airport. As an aside, we were in the process of discovering the “booking” websites usually showed “sold out” or one expensive room left, when in fact there are plenty of vacancies. For the rest of the trip, when a break from camping became a relationship necessity, we would arrive at the destination then walk or drive around and find a place to stay. No prior reservations necessary.

From Dawson City, after filing the endless cross border red tape, it was north to Fairbanks, Alaska, where we again waited in the yellow box for the customs agent to arrive and sniff our plane for contraband. Taxi for fuel, then to a fantastic plane campground, where you guessed it: flush toilets and showers! The airport is massive and super busy with paved, snow, and water runways.

We borrowed the campground bikes and did a self tour of the non-commercial portions of the airport, including a great pizza restaurant. An unusual heat wave of 90 degrees blanketed the area scrambling the locals to Wal-Mart to fight for the few fans. We rented a car and drove the scenic route to Denali park, where we camped two nights, hiked, and took an eight-hour narrated bus tour through the western portion of the park, saw moose, elk, and bears in the distance. Lots to see and do there.

Back to the Fairbanks campground, where we saddled up the next day for our own “flightseeing” tour of the eastern Alaskan Range where we hoped to see Denali (Mt. McKinley) up close and personal. I should note it turns out the Denali gravel airport is open to the public and is a stone’s throw from where we camped. Had we known, we could have flown there and walked to the campground.

We did land there on our flightseeing tour just to say we did it. A bit tricky in and out which is probably why it is rarely used. Off to see the “peak” we crossed over many amazing ice fields and glaciers, being sure to announce our position in the blind every few minutes on the appropriate frequency due to the busy flightseeing activity. It soon became apparent the tour operators were all down low skimming the glaciers, landing on them, and thought it was funny we were announcing at 9,000 ft! “Altitude is king” is our motto and we did not want to experience landing on a glacier without skis. Unfortunately, Denali makes its own weather, and the peak was not to be seen that day.

Regarding our question is Mt. McKinley treacherous? YES!  We peeled off to Talkeetna, the very small historic town where the aforementioned late Don Sheldon’s bush operation is now run by his daughter. We fueled and inquired if there was an airport camping area? Nope. “Can we camp next to our plane?” “Sure, why not?” “We will leave the FBO door open if you need to charge your electronic equipment and use the bathroom.” Tent pitched and weighted down; we took the ten-minute walk to town, explored, and refueled our bodies at a great bistro with the best seafood mac and cheese on the planet, then retired in our camp chairs to watch the endless stream of flightseeing Otters and Beavers taking tourists to Denali until about 10pm, when it was still very light outside. (That answers another of our questions).

Next it was off to the Kenai Peninsula, where it looked like a weather system would pass prior to our ETA. We planned to circumvent the west side of Anchorage, fly to the narrowest 10 mile wide portion of the Cook inlet, climb to 10,000′, and be within gliding distance of land if the engine quit half way across. It was not to be. A 1000′ ceiling, fog, and rain turned us back, where we diverted to Wasilla, a small airport between Anchorage and Talkeetna. (No, we could not see Russia from Sarah Palin’s hometown).

After refueling and waiting for the weather to improve, we decided to try and thread the needle between Anchorage airspace and the mountains to the east. The controllers were very helpful and told us to follow the east side of the highway until clear of their airspace. 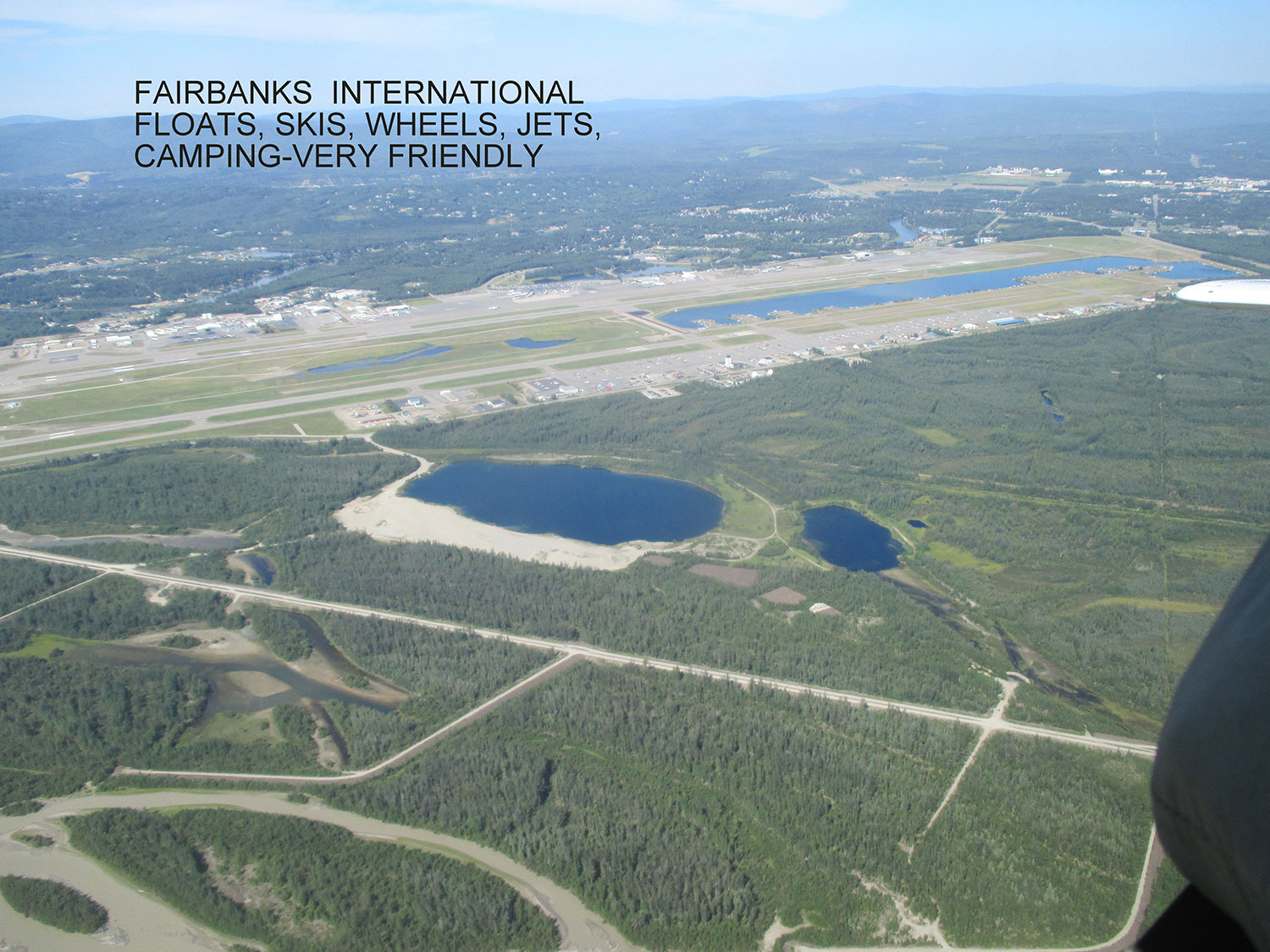 NEXRAD indicated the eye of the storm was moving west and we should be OK by attacking this time from the east. We made it in with the help of a very cool controller despite a driving rainstorm. We were learning this is SOP for Alaska. 500 to 1000′ ceilings with 3 miles visibility is a good day, not to imply we ever flew in those conditions! Dig the rain boots and gear out of the back, refuel while getting soaked, scrap the camping idea in regard to the relationship, rent a car online, run into the terminal, find out the over-the-counter rental price is way cheaper than online, load car, turn on heater full blast while eating K-rations for lunch.

For the next few days we explored the Kenai Peninsula by car, including the fishing villages of Homer and Seward, staying in B&Bs and a cabin in the woods. Lots of water, rugged mountains, glaciers, and rain, which precluded our planned excursion in a floatplane to commune with the bears up close.

Unfortunately we did not get to ask the bears if they really eat planes? The 5 minute forecast indicated the weather system was in place for at least a week, so we decided to cut our trip short and start heading home. Heading back to the Kenai Airport, we loaded the plane, and then waited in the rental car for a break in the weather, closely monitoring METARs and NEXRAD. It looked like if we could get north of Anchorage, we would be out of the main weather system.

After a couple hours, we decided to take a shot at it. We turned in the car, departed, and dodged the clouds, making it all the way to Tok, Alaska where we refueled, pitched our tent on the tarmac next to our plane, walked across the Alcan to a great restaurant (the only one within hundreds of miles), then retired to our camp chairs to watch an incredible sunset. (BTW, in Alaska, “red sky at night, sailor’s delight” means just the opposite).

Fortunately our tent is rain proof, and by midmorning the sky cleared to the southeast. We had a cell signal to file all the necessary stuff, and were soon headed back to Whitehorse, Canada, where we cleared customs then back to Watson Lake, to our private campground with the mosquitoes. 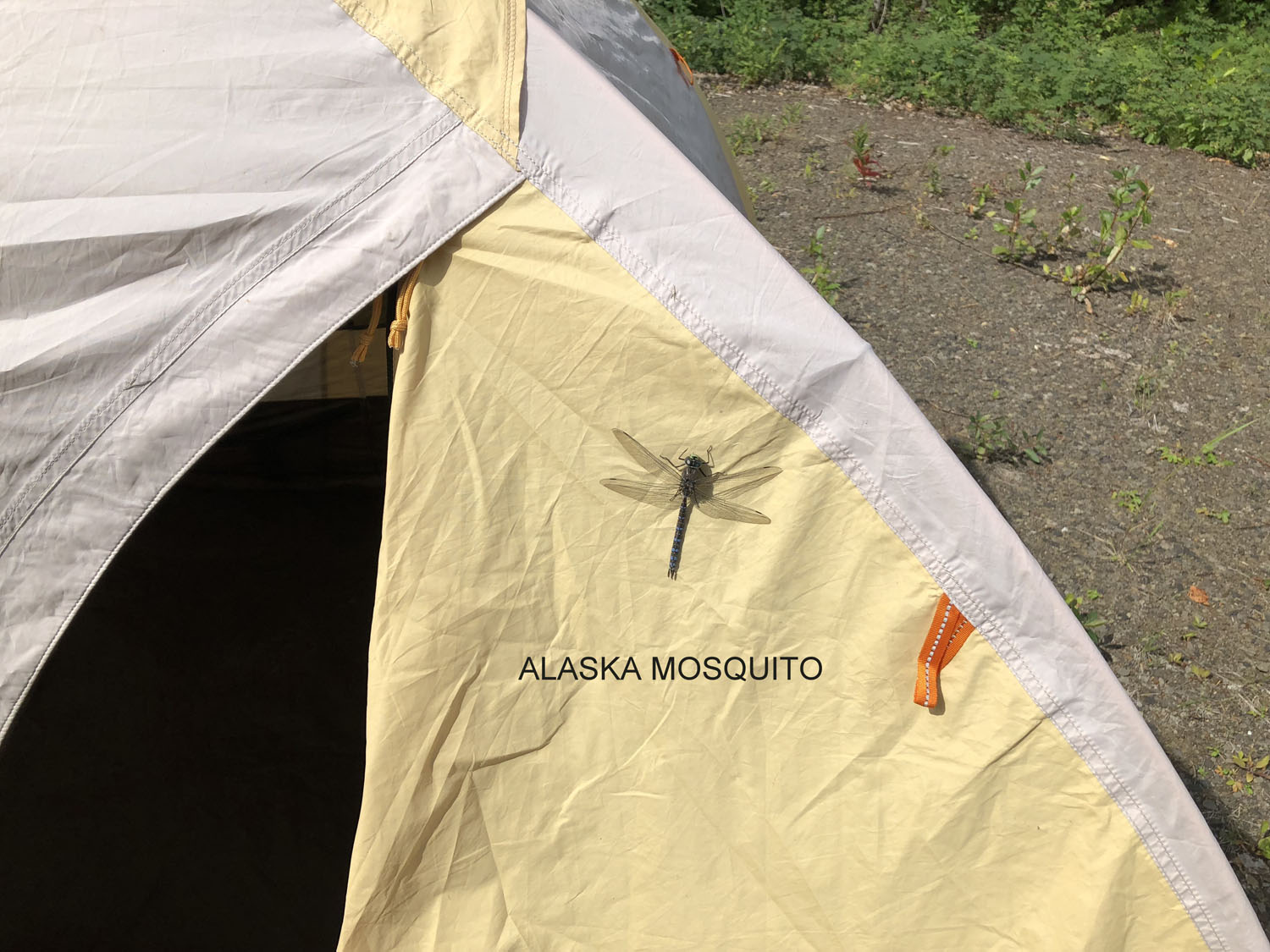 We retraced our steps back to the U.S., this time dealing with intense smoke from Canadian wildfires. Clearing customs at Bellingham, Washington was fairly straight forward other than it felt like we were criminals until the agent finally loosened up a bit. After camping again at Orcas, we filed IFR to depart early through a stratus, and then made it to Salem, Oregon where we decompressed with Scott’s cousin’s hospitality.

The final leg home was IMC part of the way due to the intense smoke from the Redding fire, then IMC into Auburn due to a spot fire, then aborting the approach due to fire fighting aircraft. Given a divert to Grass Valley, we heard a VFR aircraft landing at Auburn, so we got vectored close enough to see the runway, cancelled IFR, and landed uneventfully. Amazingly, the hairiest part of the entire trip was trying to get into our home airport!

In summary, it was a great trip overall, in fact a major bucket list item and we are glad we did it. Would we do it again? Probably not. Lots of stress, especially getting used to flying 500′ off the ground in the middle of nowhere, and the amount of time spent planning and filing each day’s flight. Customs was a piece of cake in Canada, but a PITA in the U.S.

Our next trip to Alaska will be on a cruise ship where you don’t have to think, just enjoy being pampered, no K-rations, a warm dry bed at night (which is good for relationships), and all paid for with a piece of plastic. Boring!