Home GlaStar & Sportsman GlaStar versus Sportsman: How do they really stack up?

Cruise Speed: I would rate the overall top speed of the two aircraft as fairly even with the same powerplant. It seems there may have been a slight edge to the Sportsman when the engine was new, but it seems to have changes to a slight edge to the GlaStar when the engine was broken in. With my Taildragger GlaStar with an IO-360F1A6, I could reliably count on 135 knots (slightly over 150 mph) in cruise. With my Taildragger Sportsman with an O360-A1F6 I am getting just slightly less. I suspect that is due to the extra ‘stuff’ I always carry around in the Sportsman. If it easily can carry stuff, it seems that you always do carry stuff.

This data is based on total time data (0-800 hours) for the GlaStar and 0-760 hours on the Sportsman). I also have a 76 inch blended constant speed prop on the Sportsman and had a 72 inch constant speed prop on the GlaStar (that Paul later changed to a blended 76. The Sportsman aircraft with the IO-390 clearly walks away from the smaller engines on either aircraft by reportedly close to 10 knots.

Slow speed and stall: These speeds are also nearly identical. The Sportsman, however, gets a definite edge due to the fact that it has bigger flaps that keep the speed down better during steep descents. With the GlaStar, I needed to vigorously slip the plane to keep it from over-speeding on the necessary steep descent into “the ranch” whereas the Sportsman only needs full flaps and a straight approach. As a result of the better drag of the flaps, the power necessary to maintain level flight with full flaps is greater with the Sportsman. The climbout with half flaps, however, is the same as nearly as I am able to determine.

With the longer 80 inch prop I initially had on the Sportsman, I was getting a better slow speed climb, but I changed it out to the blended 76 because my cruise speed was definitely less. With the same 76 inch blended prop, the GlaStar has a slightly better climb — most likely due to the weight difference of the stuff.

The control harmony is clearly better with the Sportsman than the un-modified GlaStar. In the GlaStar, the ailerons are very heavy compared to the elevator and the rudder.

If the GlaStar has the added anti-servo tab (or tabs) it is very close, but for some reason on the planes that I have flown, there is still a slight edge to the Sportsman. The unmodified Sportsman ailerons are very smooth, predictable and easy.

The flap control is very different with the two planes.

On the GlaStar the flap lever is increasingly difficult to pull with increasing airspeed. It is easy enough at the lower speeds, but can be quite difficult at the top end of the flap speed range. I found this to be a good way to manually determine and control my airspeed when keeping my eyes out the window for other planes in the pattern. My 110 pound (dripping wet) daughter, however, had a difficult time pulling the flaps at the top end of the flap airspeed and had to take her hand off the stick to pull with both hands. The Sportsman flaps are really easy at all airspeeds and can be done with two fingers. This could conceivably be a bad thing, since you can not tell just by feel if you are trying to put them down well above flap speeds. Overall, however, I would rate the Sportsman flap system as superior.

The Sportsman is a very clear and big winner here. The method of fairing the gear makes the gear stiffer, so the ‘bouncing on down the runway’ problem with the taildragger is nearly nonexistent.

The weight distribution of the Sportsman gives MUCH BETTER flare authority – even with the heavier engine prop combinations that have become the norm over the last few years. It is literally possible to fly down the runway with the tailwheel on the ground and the main gear still flying – even though this is actually a higher angle of attack due to the taller main gear. The need for gap seals of the elevator or vortex generators on the horizontal stabilizer is completely gone. With the nosewheel, they are both easy and forgiving, but the stiffer gear and improved flare authority helps here as well.

The weight and balance limitations favor the GlaStar, however, in the configuration that I had in each plane. Since I put an O-360 with a constant speed prop in each plane, I had a far forward static C.G. in the GlaStar. The result was that as long as I could get it in the rear of the plane, the plane was probably going to be fine on C.G.

With the same engine and prop on the Sportsman, I am much closer to the middle of the C.G. envelope with my 2 batteries behind bulkhead A, and need to be more careful about loading considerations. In some scenarios, I will not be able to load the plane to even near the full maximum gross weight and still remain in the C.G envelope with the batteries aft. I have since moved my batteries to the firewall in the Sportsman and the CG is much better, but with low fuel, it still required paying attention to CG. I can now fully load the plane, but need to pay attention to where the weight is placed. While I have not done any calculations on the Sportsman with the IO390 – particularly with the battery in the engine compartment, I would bet that this would not be much of a concern.

With the C.G. were placed farther forward in my current setup, the flare authority and control advantage remain much better with the Sportsman. 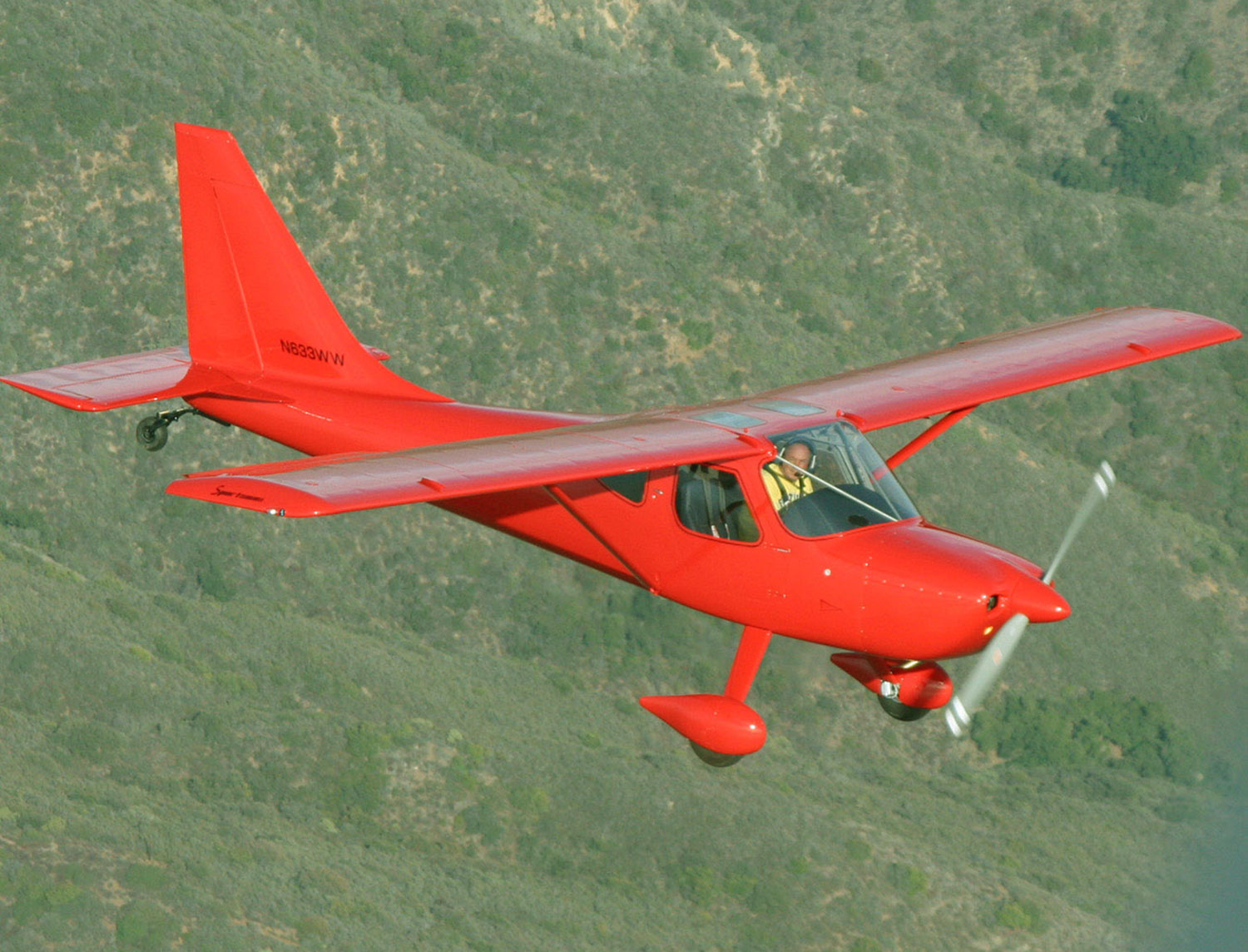 There is a definite difference between the two planes in this aspect. The GlaStar has a lower instrument panel and in the stock configuration has smaller tires on the main gear, so the visibility over the nose is better with the GlaStar even in the tricycle gear configuration. There is even more difference with the Taildragger configuration. While the view over the nose in both planes is better than almost all other taildraggers, it is superb with the GlaStar. Side view and up view are the same and are much better than most high wing airplanes.

Ease of entry in the front two seats

In this area, the GlaStar has a clear advantage. The Sportsman sits higher due to the bigger wheels and tires and the result is a more difficult entry in the front two seats. My method for entering is to lift my right foot into the foot well and then sit down on the seat. I then swing my outboard foot into the plane and then lift my inboard foot over the stick. This is definitely more difficult (but I can still do it well) with the increased height of the Sportsman. Older pilots and passengers have a bit of difficulty and I have them grab the angle frame tube and pull themselves up to assist.

In this area the Sportsman has a clear advantage – especially in the taildragger. The rear door is a real benefit and when the tail is sitting on the ground, the entry is downright easy. You just sit down and then swing your legs in.

Trying to get the rear passenger into the jump seat of the GlaStar (if you have a rear seat – as I did) is often downright funny. Teenagers do it without much difficulty, but the gyrations necessary to get in are fun to watch. I used to fly with our local airport octogenarian, Margie, in the rear seat and this could be an ordeal. We needed a stool to get her up to the front doors and it took quite a while to get her in and settled. At times we resorted to having three people pick her up like a roll of carpet and literally stuff her into the rear seat through the baggage door. Our standing joke about this was that we were ‘smuggling grandmothers’.

The GlaStar wins in this category. The narrower rear fuselage allows the wings to be folded closer together and the wing clears the top of the fuselage a lot better. The newer Sportsman design has a bigger single removable wing fold panel, but the older models had a separate plate that had to be removed to accommodate the flap tracks. They fit equally well and maneuver equally on a trailer.

Building and parts fit and finish
This is another area where the Sportsman really wins. The company has fixed a lot of the annoying problems with the building of the GlaStar and incorporated them into an easier and better fitting process with the Sportsman. I surmise a large part of this was due to the fact that they were much more involved with the building of the Sportsman and had to put up with the frustrations themselves, thus leading to the desire for a good fix. Whatever the motivation, however, the result is much more pleasurable.

The only area that was (in a way) better with the GlaStar was the ability to use the glossy smooth gelcoat as a finish instead of needing to paint the entire plane. The advantage of the Sportsman in this regard is a better type of resin that although it requires paint, lets you paint with darker colors because it is less heat sensitive.

The Sportsman clearly wins when all things are considered (especially with the increased useful load) and the company has made good improvements on a great design.

If you are buying an already built plane on a budget, the GlaStar is a far better deal. The prices used have fallen significantly for the GlaStar since it is no longer in production, but remain far higher for the Sportsman. For the money, a Sportsman is a great purchase, but a GlaStar is a steal!

Although it would have been nice to have kept the GlaStar line in production forever, in the real world of limited resources and the need to concentrate on making fewer designs more successful, the company made the right choice.