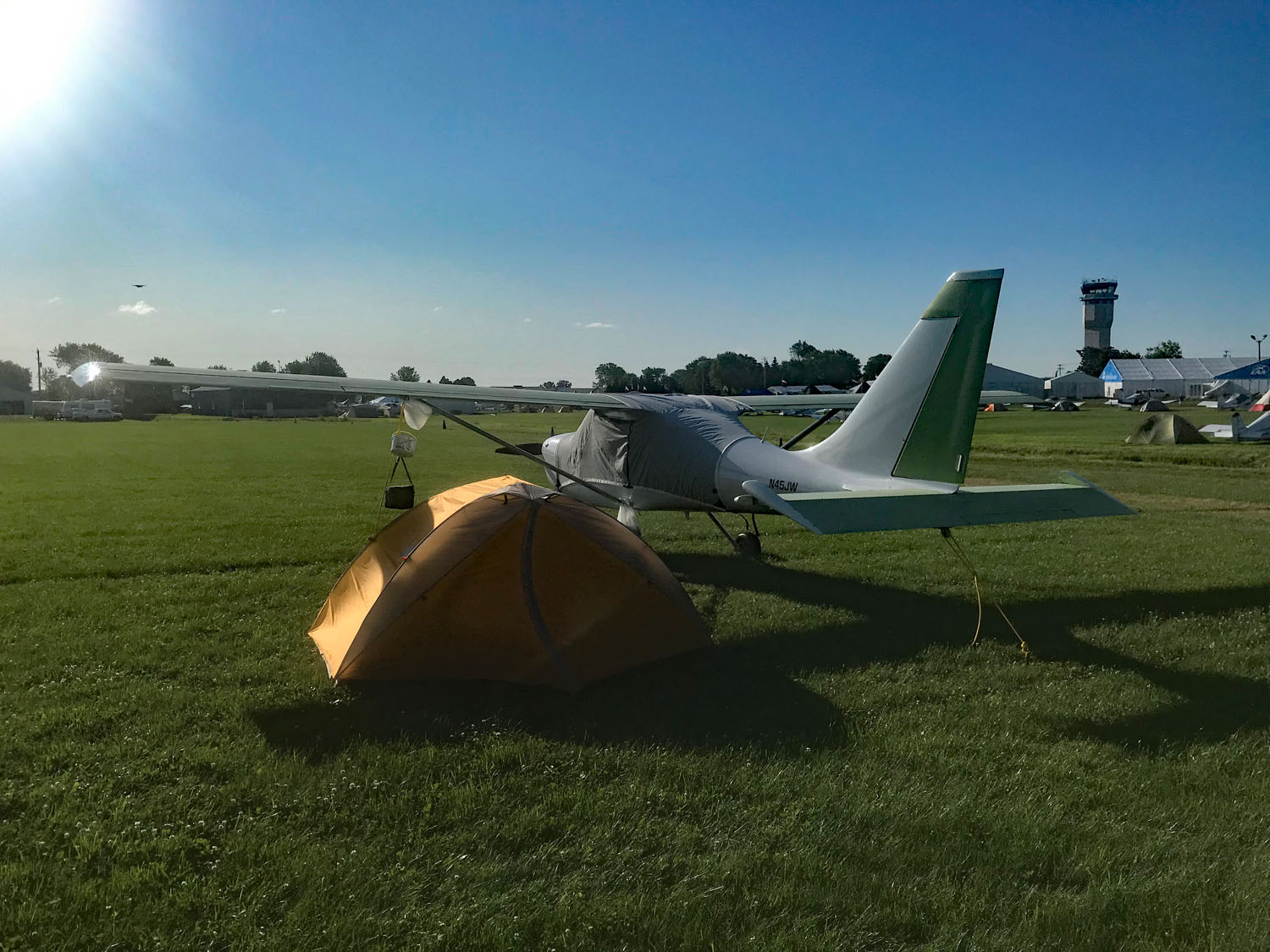 Plenty has been written about Oshkosh so I will not say much about AirVenture 2019 except it was awesome. It is weird to reminisce, and to think how easily things can be taken for granted, like walking around in huge crowds. We did not know then it would be at least two years before the next opportunity to attend. 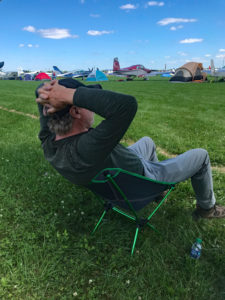 After landing at Wittman on Sunday the 21st we were directed to homebuilt parking to await the “all clear” to get into homebuilt camping. The day had turned sunny and beautiful. The ground was wet but not too soft, and things were drying out quickly. By the time we checked in and got our wrist bands and camping permit, the word was passed that we could taxi to camping.

We had a great spot at the end of row 320.  It was close to the homebuilders’ pavilion, showers, tram stop and the back gate where we could catch an Uber if needed. In short order the plane was tied down, cover on, tent set up, and we were chatting with our neighbors.

After spending a couple of nights together my wife, Sue, departed for Tucson and I was left to wander the show on my own. I had a visit from the Oshkosh preflight briefer in the middle of the week. After he asked if I had the departure NOTAM, ordered fuel, etc. he said, “I have an assignment for you. Before you leave you have to visit the seaplane base.” He added that they had their own happy little world down there, and I should not miss it. So, the next day I hopped the bus and walked the trail through the woods. Emerging, I heard marimba music, and water was gently lapping the shore where people were wading out. Absent of the bustle and racket of the big show; it was peaceful. Amphibs were pulled up on the beach and they had a free boat tour of the seaplane basin. There was soft music in the air, food and beer and… I want a SeaRey. 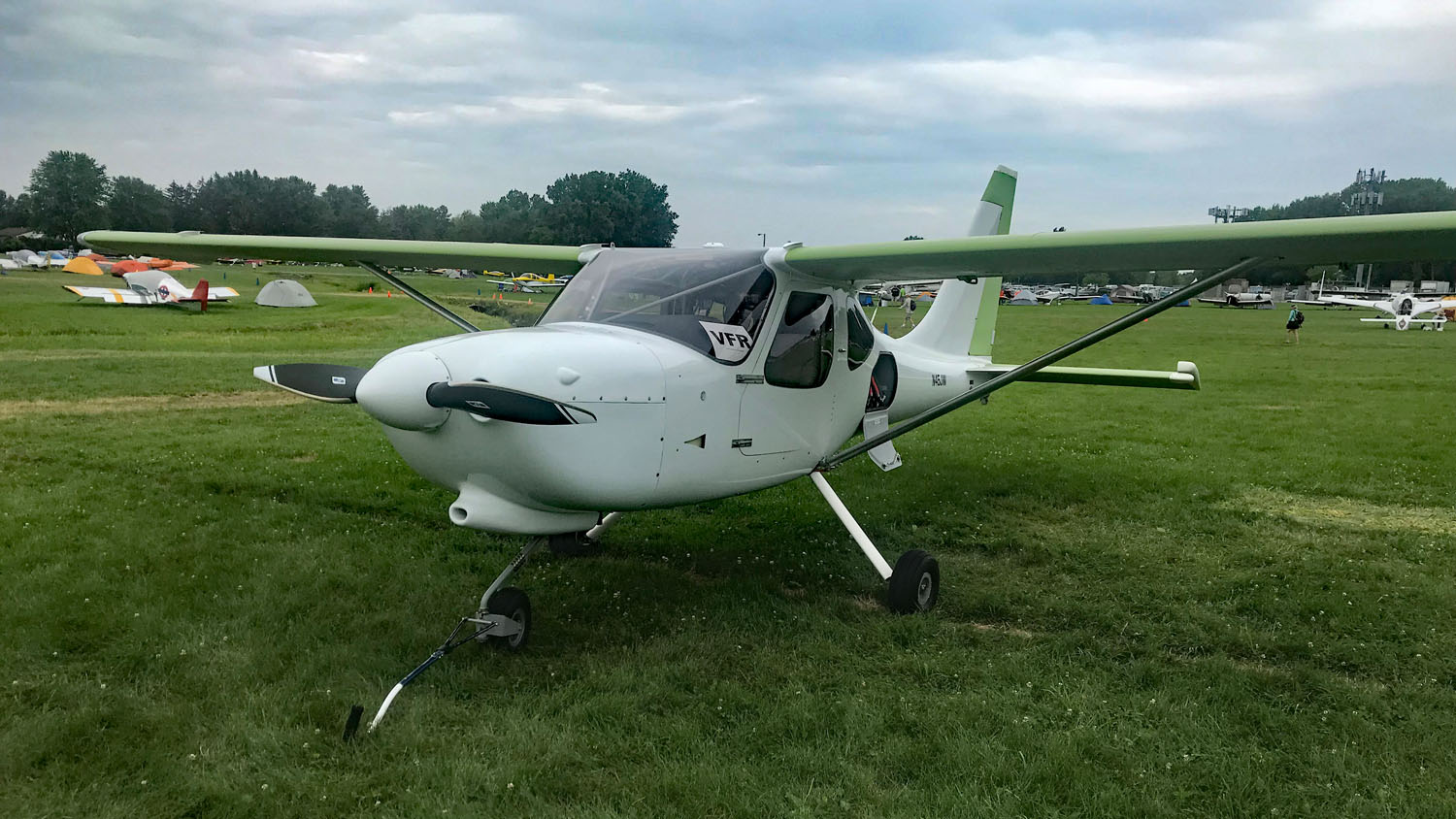 To summarize my Oshkosh experience; I walked miles, ate at many “feeds” including the excellent Glasair group brat feed, and generally had a great time soaking it all in.

I decided Friday the 26th would be a good time to pull the plug. That morning I broke camp, packed up, preflighted, fired up and managed to get in line for departure. After take-off from 18L I headed back to Belleville, Illinois, to catch up with a few more relatives. After having completed my main bucket list item, my schedule now was mostly open-ended. I would need to stop off at some point in Garden Valley, Idaho, to retrieve my Turtle-Pac. There Jim Trudeau was waiting to join me on the trip north with his Sportsman N390SS.

After spending the night in Belleville, and finding the FBO guy at Scott this time, I fueled up and headed west on the 27th. Again, I stopped for fuel at Cameron, Missouri, and then flew to Hastings, Nebraska. There I ate dinner and stayed the night. The next morning, I took off and picked my way through a line of rain showers. I saw one flash of lightning, but it was clear on the other side. Two and a half hours later I stopped in Pine Bluffs, Wyoming. After fueling up I continued to Ogden where I planned to visit my cousins. Crossing the Rockies in the afternoon, the ride was mostly lumpy again. As I neared Ogden from the east and being unfamiliar with the area, I kept looking for the airport. Finally emerging through Ogden Canyon, there it was.

After my visit with the Utah cousins, I kept heading west across the Great Salt Lake. Next stop:  Chester, California to try and connect with my wife’s stepsister. I had not been able to reach her by phone, but she had invited me to stop in if I ever flew down. I figured I would land and spend the night after a four-hour flight from Ogden. Crossing northern Nevada was all turbulence, but Chester was nice, set on a beautiful lake with a great airport. Unfortunately, there was no transportation available at all; I walked into town, about a mile and a half, in 90-degree heat.  I never did connect with Sue’s stepsister; it turns out she was camping in the mountains.

The next morning, July 30th, I took a more comfortable, cooler walk to the airport and departed for southern California. I flew along the Sierra Nevada range and down across central California to Taft-Kern County airport. Taft has been an oil field town for over a hundred years and is on the edge of the San Joaquin valley. An old Navy (and former Alaskan) buddy of mine, now living there, came to pick me up, and I spent the night at his house.  (A side note: he is the one who suggested we drive to Alaska after we got out of the Navy.)

Taft (L17) has an interesting runway with 2.2% grade, landing not allowed on runway 7, and take off not recommended if there is a tailwind- so you normally land on 25 and take off on 7. That is what I did, with no wind, (3300 feet long).

On the 31st my friend dropped me at the airport, and I flew to Camarillo which is the closest place to my brother’s clan. I parked between jets at the FBO, ordered fuel and picked up a rental car. I drove to Simi Valley, where I had lived in the ’60s before leaving home for the Navy (and then Alaska). I was able to connect with at least a half dozen relatives in the area.

The next day my older brother not only wanted to check out my plane but also go flying. I suppose I should not have been surprised: in his Navy days he crewed on Grumman C1 CODs. Off to the airport we went, and I gave him a scenic tour of the local area.

On August 2nd, I loaded up and departed Southern California for a return to Idaho.  I landed at Minden, Nevada, for fuel and again crossed the bumpy northern Nevada desert and into Idaho.

Once back at Garden Valley I got the Turtle-Pac re-connected, changed oil, and took some time to look the plane over closely. Since Jim (Trudeau) decided to fly his Sportsman up to Alaska with me, we both began watching the weather for an opportune time to launch. I also washed the plane again and flew over to Cascade airport for fuel. One evening we sat out on his driveway watching thunderclouds roll in, and when the lightning started to get a little close, we figured we had better go inside. The wind came up suddenly, rain and lightning crashing all around, and it occurred to me—I had better go check the tie-downs on the plane! We jumped in his truck and drove the five miles to the airport through sideways rain, but when we got there it was barely sprinkling and calm. The next day we found out that at a nearby campground, several huge trees had fallen, one totally smashing a pickup, just missing the camp trailer next to it.

On the 11th of August, it finally looked like a go for flying up the coast. We left Garden Valley for Bellingham, Washington. A band of weather across Oregon seemed to be moving out of our path but as we got closer our attempts to wind our way around it, or through it, was not working. We climbed to almost 14,000 feet when Jim made the call to head to La Grande and wait it out. He called me back to check if I had heard him. I had, but before I could answer him, I was busy shutting off my angle of attack because it was squawking non-stop. I then radioed him what happened. It looked to me like an AOA port froze over because I also noticed my airspeed indication had dropped to zero. We had stayed clear of clouds, but now I know the first indication of picking up ice. It never happened before or since, but the airplane continued to run and fly fine and as we descended everything returned to normal.

After a couple hours on the ground at La Grande we were able to make Bellingham with no problem. We spent the night in Bellingham and topped off with fuel, including the Turtle-Pacs. (Jim also had one in his Sportsman.)

The next morning the 12th of August, we left for Ketchikan and made it in 4 hours 40 minutes, averaging 124 knots over the ground. I used even less fuel on this leg than the first time. I took on 15.2 gallons at Ketchikan and figured 17 gallons pumped from the Turtle-Pac which agreed with my totalizer.

We continued to Sitka and stayed with Jim’s nephew there. In the following days weather moved in. Realizing we might be sitting there for a week or more, we decided to fly commercial to Kenai on the 15th and come back for the planes when the weather broke. That turned out to be four days later. We came back to Sitka on the 19th and flew our planes to Soldotna, stopping again for fuel in Yakutat.

The wildfire smoke was still so thick on the western Kenai Peninsula that I was considering landing at Seward. I radioed Jim, and someone answered back that they were over the Kenai Ice Fields where visibility was good. By this time, I had descended enough that I could once again pick up the terrain ahead of us. About thirty minutes later we landed at Soldotna.

I flew the coast and made it to Oshkosh and back!