For the main gear, the Glasair III down-locks with the heavy duty side brace assemblies must also be installed. 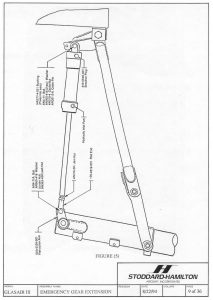 Small ram actuators mounted through the side brace bellcrank brackets and the C-l ribs drive against the down-lock bellcrank brackets to unlock the up-lock hooks, drive the gear down, and lock the gear in the down position. Since the emergency actuators work in only the down direction, just one hydraulic line is needed for each emergency actuator.

The electric hydraulic pump that provides hydraulic pressure to the landing gear primary actuators is activated by the cockpit-mounted gear switch through two gear system solenoids (four solenoids for the earlier two wire hydraulic pumps). Hydraulic pressure switches automatically shut off the pump when the pressure rises to about 1400 to 1500 psi during gear retraction and about 750 to 850 psi during gear extension. The electric hydraulic pump has internal bypass valves for backup, which are set at least 100 psi higher than the pressure switches (normally about 1000 psi on the gear extension side and about 1750 psi on the gear retraction side, +50 psi).

A panel-mounted override switch is provided in case the gear extension pressure switch fails in such a way that it opens the circuit to the electric hydraulic pump. When actuated, this momentary contact push-button switch completes a circuit that bypasses the gear extension pressure switch, allowing the pilot to run the pump to either extend the gear or to bump up the hydraulic pressure to the pump’s internal bypass pressure. (The hydraulic pump will bypass internally before damage can occur). An amber hydraulic pump indicator light lets the pilot know when the pump is running.

When operating the emergency gear extension system, a selector valve mounted in the center console must be positioned to allow use of the hand pump. The hand pump then pressurizes the emergency actuators to extend and lock the gear.

As the gear is extended with the hand pump, resistance will be felt as each of the main gear up-lock hooks are released and again as the down-locks are engaged. The operator continues to pump the gear down until all three green gear lights come on, indicating that the gear is in the down and locked position.

NOTE: Even in the unlikely event that hydraulic pressure from the hand pump is lost, the nose gear drag brace is held in the extended, over-center locked position by two springs.

The emergency extension selector valve also works as a direct bypass of hydraulic fluid to the reservoir, routing the return fluid around the hydraulic snubber and the electric hydraulic pump’s internal check valve. If the pump runs but fails to extend the gear completely, the pilot may first try to extend the gear by selecting the emergency extension position on the selector valve and allowing the electric hydraulic pump to run the gear down, bypassing any debris or contaminants that might have blocked the normal fluid return passages.

Note: As mentioned above the Glasair III down-locks with the heavy duty side brace assemblies must be installed to adapt the new Emergency Gear Extension system.