Written by Bill Marvel and originally published in the SoCAL-RVlist. 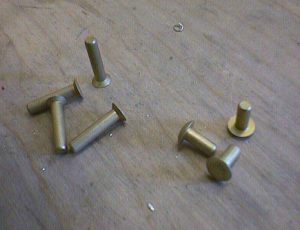 Two days ago I got around to doing something that I had planned last year—actual pull tests on riveted aluminum coupons to see how critical it is to drive rivets to the correct height. All of us building or with completed airplanes (as will those planning on it in the future) have had to wonder which imperfect rivets to drill out and which are OK. The answer is obvious when there is a severe cosmetic problem, but when strength is at issue, how much does a slightly under or over-driven rivet affect strength? How much does a grossly under or over-driven rivet affect it? Frankly, I had made the decision that the risk of damage from drilling out a flush rivet is greater than the benefit of doing so, unless an obvious cosmetic defect or really bad rivet is at issue. Now I have some hard data to go by.

What I did was to make up 10 test coupons. Each of these consisted of two pieces of .032 2024-T3 sheet 1.5 inches wide and 4 inches long. These two pieces were overlapped by 1.5 inches and riveted together with two parallel rows of 3 rivets each. Of the 10 total coupons, five involved the use of universal head AN470AD-3 rivets and the other 5 used AN426AD-3 flush rivets. In the latter case, both pieces of aluminum were dimpled at each rivet location, as is routinely done in Van’s airplanes. In fact, the coupon construction is similar to the double rivet line where the lower outboard wing skin overlaps the lower inboard wing skin. This joint is loaded in tension normally for positive G flight and gave me the idea to mimic it for the pull tests.

Before getting into the results, let me ask you a question. Please think about the answer before proceeding. Just how many pounds of force do you think it would take to destroy one of the sheets used in making up the coupons? Remember this is .032, 2024-T3 sheet 4 inches long and 1.5 inches wide with no holes or rivets in it. Think about grabbing and suspending it at one end with some sort of clamp across the entire 1.5 inch width and then hanging weights on the other end from another clamp. How much weight would it take to break this .032 inch thick sheet?

Would a 100-pound set of barbells do it? A 500-pound set? A 1200-pound small car? A gross-weight RV8 at 1800 pounds? A gross-weight Grumman Tiger at 2400 pounds? More than that? Come up with some sort of gut feel before proceeding. I was surprised by the answer. You may or may not be, depending on your knowledge in this area.

Since some of you will cheat and read on, I’ll hold the answer for a moment! Each of the 5 test coupons, both with the universal head rivets and the flush head rivets, was riveted to a different degree.

The idea was to put each coupon in a pull test machine and expose the riveted joint to a slowly increasing force until it yielded. This was done at a structural test lab in Paramount, CA, which works mostly with civil engineering construction materials.

A stress/strain graph was running and we monitored it to see the first indication of joint failure as indicated by a decrease in force required as the coupon stretched, cracked, broke in two, sheared or tipped rivets, etc. I was interested in the force required to cause the initial failure, as well as the nature and appearance of that initial failure; i.e. what actually happened first. We agreed to stop the machine at the incipient indication of failure, thus preserving the coupon in its early failure state without destroying the joint completely. I was very curious as to how things would fail and really had no idea other than the thought that the dimpled, flush riveted joint would probably be stronger than the undimpled one with the 470 universal head rivets. In contrast, one of the owners of the lab came in to watch and thought the opposite would be true. In his 50 years in the business, he had never seen this test done. What do you think would hold best?

That said, here is the answer to my prior question. A force of 2300 pounds was required to break the test material with no rivets or holes in it. It failed catastrophically shortly after some initial stretching was noted. I had no idea that a cross section of this 2024 T3 sheet, .032 inches thick and 1.5 inches wide, would sustain anywhere near that load. Frankly, I was surprised when it passed 1000 pounds and still going strong. Before showing you the numbers, I will give a brief summary of them:

Anyway, those are some real numbers for an area we have undoubtedly thought about at one time or another. My opinions, FWIW: I think an occasional rivet that is slightly under driven or slightly over driven is utterly no big deal and can safely be ignored. We all have some of these flying in formation in our airplanes. A line of them would be another matter. Even an occasional grossly over driven rivet is probably OK, especially if getting rid of it could cause damage. And if under-driven too much, just whack it again. Hope you learned something from this. I certainly did. 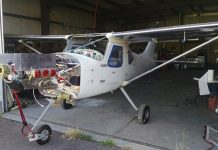 Sportsman Cleared for Flight Testing with UL Power 520i Firewall-Forward 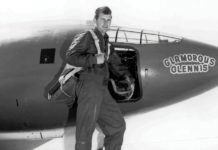 Are You a Test Pilot?