Home GlaStar & Sportsman Flying Are You a Test Pilot?

Who do you think of when you hear the term, ‘Test Pilot’? I’d bet many, if not most of you, think first of Chuck Yeager and Bob Hoover. As well-known as these pilots are, there is another group of test pilots I think of often. That group includes anyone who has conducted the first flight of a new experimental amateur built (EAB) aircraft. I salute those builders of GlaStars and Sportsman that have done so successfully, and also to those to who have encountered challenges during the process.

For those of you that have yet to do so, I wish you great success and also hope you take the proper steps to prepare prior to launching that newly built GlaStar or Sportsman for the very first time. So does the FAA, EAA, NTS B, the AOPA Safety Foundation and everyone you know and love.

The FAA produced an advisory circular in 1989, (AC 90-89 – Amateur-Built Aircraft and Ultralight Flight Testing Handbook) to aid those brave ‘Test Pilots’ who are about to conduct a first flight and subsequent phase one flight testing of their newly built aircraft.

The flight test plan is the heart of all professional flight testing. The plan should account for every hour spent in the flight test phase and should be adhered to with the same respect for the unknown that all successful test pilots share. The time allotted for each phase of a personalized flight test plan may vary, and each phase may have more events or checks than suggested in this AC. The goals, however, should be the same.

The two goals for an amateur builder/ owner should be as follows:

a. A test pilot should meet the following minimum qualifications:

The following suggested number of flight hours is only an indication of pilot skill, not an indicator of pilot competence. Each test pilot must assess if their level of competence is adequate or if additional flight training is necessary. If an individual determines they are not qualified to flight test an unproven aircraft, someone who is qualified must be found.

c. The test pilot should:

So will you be the ‘Test Pilot’ of your newly built plane or will you have someone else do it for you? If you are planning on doing it yourself, have you read AC90-89 or were you were aware of some, most, or all of the suggested recommendations listed above? There is also a companion AC 90-109A – Airmen Transition To Experimental Or Other Unfamiliar Airplanes. I will go in to more detail of this publication in the next issue of the flyer. 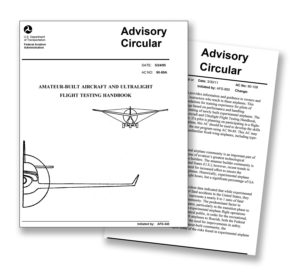 You needn’t worry about knowing the entire contents of the document. It covers all types of EAB aircraft including those that were conceived as one off designs on the back of a cocktail napkin. When you put it all in perspective and consider the sophistication of our highly refined Glasair factory built kits and even more so with the Two Weeks to Taxi program, some of the AC may not apply to you. However, most of the safety suggestions, preparation, and other safety related items should be adhered to. It could save your life or if you have an in-flight emergency, help you remain calm and safely get the airplane back on the ground.

Some of you may plan on having a safety pilot go with you on your first flight and or subsequent phase one flight testing that will be up to 40 hours. Can this be done legally? There are many builders who have done so and the FAA is aware that happens.

But is it legal? No it is not, at least not under the current regulations.

When you receive your operating limitations during the FAA inspection of your newly built GlaStar or Sportsman, there will be language in the document specifying who can be in the airplane during the first flight and all phase one flight testing. Usually it will state that only Required Crew may be on board. What does that mean?

I know many people who think that means it’s up to the owner / operator and pilot of the aircraft being tested as to who can be designated Required Crew for flight testing.

Justifications such as “I need someone to watch the gauges for me” or “I am not very qualified in the aircraft and want some with more experience in this type to go with me,” etc.

But that’s not what Required Crew means.

The real acid test, according to the FAA and EAA, is “Can the particular aircraft, be safely flown with one crew member?”

It’s the nature, configuration and design of the aircraft that determines Required Crew and we all know that any GlaStar or Sportsman and most all other EAB aircraft are designed with a single pilot in mind even if they are built with full dual controls.

I too was mistakenly under the impression that the pilot / owner / operator could determine who was allowed to be ‘Required Crew’ until I was straightened out on the matter.

Now with all that being said, the FAA and EAA are working to possibly come up with a change in the rules that could allow an instructor or some other more qualified pilot to be in the aircraft during phase one flight testing to enhance safety. But as of now the rules stand as they are and there is no way to know when and if any change will occur and what it might look like and what minimum qualifications the second ‘safety’ pilot must have.

So, in the meantime, fly as though your life depends upon skill and judgment— because it does!

If you’ve been building your GlaStar or Sportsman for a very long time, what are you doing to maintain your piloting skills and aeronautical knowledge? Could you pass a knowledge exam or simple quiz or answer some basic questions you might encounter from an instructor during a BFR?

Are you a Test Pilot?

The accident rate for first flights is very high.

Pilots of varying skill levels and usually with no prior test piloting experience are climbing into newly built aircraft. It may look the same as others but, there is this one big difference. It has never flown and there could be all manner of hazards lurking there, ready to cause trouble or worse, a tragedy.

There have been many accidents due to control surfaces rigged backwards, or controls not getting full travel or getting jammed because of a tool, part or scrap left behind. There have been fuel starvation accidents due to blockages in fuel lines, filters or injectors as a result of debris not being properly flushed from the system, or old fuel that has been in the tanks too long, fuel and oil lines coming loose resulting in fire, electrical problems resulting in fire, etc.

I am reminded of the tragic fatal accident of the Sportsman in California in 2010. A loose jam nut on the elevator torque tube led to a loss of elevator control because the torque tube separated from the rod end bearing.

I personally witnessed the very short first flight of a beautifully built Murphy Rebel at Arlington in 1996. I was flying a tow plane and returning to the airport after dropping off a glider. While on the downwind, just about to turn base, I saw the Murphy lift off and the come right back down again skidding off the left side of the runway.

I landed and taxied over to where the plane had come to rest. The left gear was collapsed and the shaken but otherwise uninjured pilot was standing next to his wrecked airplane with a rather bewildered look on his face. He wasn’t sure what went wrong. I asked his permission to take a look.

The first thing I did was to grab the stick and move it from side to side. The ailerons had been rigged backwards! No one who checked the airplane before first flight caught that until it was too late. Not the builder / pilot, not the DAR who did the inspection.

Nobody caught that simple error that cost the guy his beautiful new airplane that he had spent years building. It happens far too often.

Both the pilot and the airplane have to be at their best for that first flight. So if you decide to be your own test pilot, just make sure you do it properly, safely and with good planning, otherwise you may wish to hire a professional.