In 1980 the kit aircraft industry was revolutionized by the introduction of the Glasair – the world’s first pre-molded composite kit plane. Glasair Aviation is now one of the largest, most well established kit plane manufacturers in the world, with more than 2,500 kits in the field and some 1,200 aircraft flying in countries around the world.

Glasair debuted at the EAA Convention in Oshkosh — the first pre-molded composite kit aircraft ever offered! All the major airframe components pieces such as the fuselage, wing, cowling, and tail feathers were already fabricated in two halves. All the builder needed to do was install the ribs or bulkheads and seam the halves together. All the parts came direct from the factory with a mirror-smooth gel coated finish. Thus, the Glasair kit offered tremendous time savings compared to the scratch-built projects that were then available.

In addition, the production kits featured a 3″ higher canopy for improved cockpit comfort and visibility, as well as the more powerful 160 h.p. Lycoming O-320 engine, giving the Glasair performance and “real airplane” utility simply unparalleled among the homebuilts of the day. It was no wonder that 150 builders in 1980 alone saw the Glasair as their kitplane of choice!

Recognizing the revolutionary nature of the Glasair design, the EAA awarded Tom Hamilton the prestigious Raspet Award for outstanding contribution to the design of light aircraft.

The retractable tricycle gear Glasair RG was introduced, raising the standard for homebuilt aircraft performance to a level previously uncontemplated. At the same time, kit completeness for both the RG and the TD was greatly improved. The introduction of prefabricated rudder pedal assemblies, aileron and elevator bellcranks, control stick yokes and various other metal parts completely eliminated the need for welding or complex metalworking skills on the part of the Glasair builder.

At the urging of customers who wanted a safer, easier to handle Glasair, the fixed tricycle gear Glasair FT was developed. Determined to make the new landing gear retrofittable to existing TDs, Stoddard-Hamilton converted the original production prototype, N89SH, to the new gear configuration. With great care taken in the design of the nose gear installation, the new FT gave up only 2 m.p.h. of speed to the tail dragger, while opening up the Glasair experience to a whole new range of pilot abilities.

With some 700 Glasair kits in the field, Stoddard-Hamilton had complied quite a list of desired improvements, many of which originated with the builders. Enter the Glasair II, which was simultaneously introduced in TD, FT and RG models. The main areas of improvement over the original Glasair I centered on cockpit ergonomics and labor savings. A complete retooling of most of the composite parts resulted in an additional 3″ of cabin width and 1-1/2″ of cabin height.

These changes also resulted in a larger baggage compartment.Stoddard-Hamilton’s labor-saving campaign resulted in, among other things, pre-molded mounting joggles for such components as the wingtip fairings, cowling, and so on; factory-made cutouts for the canopies and windshield; and pre-molded scribe lines in parts that required builder cutting. The end result was a more comfortable, more practical, better engineered aircraft that was more enjoyable to build as well as to fly.

Nineteen eighty-six also marked the introduction of the fire-breathing Glasair III, still widely considered to be the ultimate two-place sportplane on the planet. Powered by its 300 h.p. Lycoming IO-540 to cruise speeds in excess of 265 m.p.h., the retractable gear III featured flight performance beyond what was previously thought possible in personal aircraft. The kit, which featured all the new labor-saving innovations of the Glasair II kits, proved to be an immediate sensation among pilots who demanded the best.

Finally, in 1986, Stoddard-Hamilton became an employee-owned company, a unique situation in the kitplane industry.

Employees of the company to this day remain committed to producing the highest quality kits and providing unequaled customer service because they are working for their company.

The Glasair II-S models were introduced — “S” for stretched. The original II fuselage was lengthened by 14″, providing easier installation of the more powerful 180 and 200 h.p. engines builders were installing, as well as improving the appearance of the aircraft.

As before, tail dragger, fixed tricycle, and retractable tricycle gear were all offered on the II-S. The year 1989 marked the founding of Stoddard International, Inc., a sister company organized to produce composite parts for the Boeing Company.

SI has manufactured a variety of parts for the 737, 747, 757, 767 and the new 777. SI was one of the first companies in the nation to be approved under the new D1-9000 specification, the most advanced manufacturing quality control specification to date. Stoddard-Hamilton continues to draw on SI’s administrative and technical experience in the certified aircraft world to enhance the quality of its kits.

Stoddard-Hamilton did the ultimate sport plane one better with the introduction of the Glasair III Turbo. A complete firewall-forward package, this option pushed the standard Glasair III airframe up into the Flight Levels at speeds of well over 300 m.p.h.

GlasFloats were developed. Available in straight and amphibious versions, these all-composite, leak-proof floats opened up new vistas of adventure for builders of light aircraft such as the Kitfox and Avid Flyer.

The Glasair III LP was displayed at the NASA exhibit in Oshkosh. The result of Stoddard-Hamilton’s participation in a NASA-funded Small Business Innovation Research (SBIR) grant, the LP was the first lightning-protected composite kit aircraft. Under the terms of the SBIR grant, the research results produced in the course of this project became part of the public domain, and future certified composite aircraft such as the Cirrus and the Kestrel utilize technology based onStoddard-Hamilton’s findings.Stoddard-Hamilton continues to participate in several other SBIR grants and NASA advanced research programs on such topics as composite manufacturing techniques and aircraft crashworthiness.

The Glasair Super II was also introduced in 1993. The II-S fuselage was lengthened by 6″, the wing was moved aft 1-1/2″, and the horizontal tail surfaces were increased in size by 30%, producing an aircraft of peerless handling characteristics with a CG envelope wide enough to accommodate a wide variety of engine and equipment choices. Available in any of three gear configurations, the Super II offers an unbeatable combination of performance, utility and economy.

The exciting new GlaStar was announced at the Sun n’ Fun airshow in Lakeland, Florida, and first displayed as an almost-finished prototype at Oshkosh. Featuring a foldable high wing, convertible landing gear options and a cavernous baggage compartment, the GlaStar promised to open up a whole new realm of backcountry flying adventure to Stoddard-Hamilton’s customers. Based on the company’s reputation for solid products and steadfast customer support, more than 100 builders placed deposits on the new kit in advance of the prototype’s November first flight.

Behind its original 125 h.p. Continental IO-240 engine, the GlaStar prototype exceeded its design goals on every parameter and became hailed as the best new kitplane of the decade. With its prodigious payload, excellent short-field capability, very respectable cross-country speed, startlingly docile slow- speed handling, and straightforward construction, the GlaStar dominated the general aviation press in 1995 and became the hottest selling kitplane on the block.

By the fall of 1995, complete GlaStar kits were being shipped, and the first customer-built GlaStar took flight after less than three-months of construction. Nineteen ninety-five also saw major enhancements to all models of the Glasair.

Kits for both the III and the Super II underwent upgrades, as previously optional equipment was incorporated into the standard kits. Ever-increasing degrees of factory prefabrication, part quality and kit completeness continue to be the hallmark of the Glasair line.

The GlaStar prototype, having logged some 400 trouble-free hours in its first eighteen months, was equipped with a new 160 h.p. Lycoming O-320 engine installation. With a constant-speed propeller, this powerplant took the already impressive GlaStar to a new level of performance on all fronts — cruise speed, climb performance and short-field wizardry.

Having flown the O-320-powered GlaStar, a well-known aviation writer summed it up best, calling the aircraft “magical.” Perhaps this is what EAA had in mind when they awarded Tom Hamilton and crew an unprecedented second Raspet Award for outstanding contribution to the design of light aircraft!

Fulfilling the ultimate goal of its initial conception, the GlaStar was tested on floats — both Aerocet 2200 straight floats and Wipline 2100 amphibs. Designed from the outset as a floatplane, the GlaStar once again exceeded all expectations in terms of its stunning performance off the water and its astonishing flight characteristics.

In addition, the 180 h.p. Lycoming O-360 engine was installed in the GlaStar, unleashing even more of the aircraft’s potential.

Some of this was demonstrated by veteran airshow pilot Bud Granley, who wowed the crowds at the 1997 Northwest Regional EAA Fly-In here in Arlington with an impromptu program of positive-G aerobatics in the 180 h.p. GlaStar.

Following a sophisticated computational fluid dynamics analysis of its aerodynamic qualities at speeds in the Mach .6–.7 range, the Glasair III got an enlarged rudder, a new cowling and a mighty turbocharger to become the exciting Glasair Super III. Designed to produce 350 h.p. at altitudes of up to 37,000 feet, the new powerplant opened up whole new vistas in Glasair performance. Flight testing on the prototype is ongoing, but to date the aircraft has been flown to 35,000 feet at airspeeds of greater than 320 knots! At 32,000 feet, the aircraft is still capable of climbing at over 2,000 feet per minute.

GlaStar builders got a tremendous boost in 1998 with the introduction of new “Jump-Start” accelerated- assembly options. Taken together, the Jump-Start Wing and Fuselage options shaved up to 50% off the typical build-time, allowing builders to experience the GlaStar’s incredible capabilities for themselves much more quickly.

Thomas W. Wathen, former Chairman and CEO of Pinkerton’s, Inc., purchased the assets of Stoddard-Hamilton and AADI and formed Glasair Aviation, LLC for the continued manufacturing and sale of both the Glasair and Glastar product lines.

Mr. Wathen, who sits on the President’s Counsel of the EAA and owns historic Flabob Airport in Riverside, California, selected Mikael Via to be President and Chief Operating Officer (COO) of the new companies. According to Mr. Wathen, Via is to be responsible for daily operations of Glasair Aviation and will help Wathen determine the long-term direction and growth of the company. Via, is a private pilot and builder/owner of a Glasair Super II RG.

Glasair Aviation introduced the Sportsman 2+2, a model based on the GlaStar, but with increased gross weight and cargo space which allows for second-row seating.

The company began offering builder-assistance in their “Customer Assembly Center” (CAC) where Sportsman owners could complete the airframe in 18 days.

The CAC program quickly evolved in to the Two Weeks to Taxi operation which allows customers to participate in an intensive 14-day building and educational program by the end of which, they can taxi their Sportsman and prepare it for an airworthiness inspection.

Glasair’s U.S. headquarters, management team and employees are expected to remain in the same location.

The Merlin LSA was announced in March of 2014. It is a composite, high-wing, tricycle-gear airplane certified by the FAA as meeting ASTM standards for Light Sport Aircraft (LSA). It is powered by a Rotax 912iS engine and equipped with Advanced Flight System glass-panel avionics and an optional BRS parachute system. The Merlin is the company’s first offering certified for sale as a fully built, ready-to-fly aircraft. It is not sold as a kit.

Along with the Merlin, Glasair Aviation announced a diesel powerplant for the Sportsman 2+2. The Continental CD-155 diesel engine is EASA and FAA certified. The Diesel Sportsman is only available through the Two Weeks to Taxi program.

Glasair Aviation sold the rights and inventory for the Glasair models II and III to Advanced Aero Components. 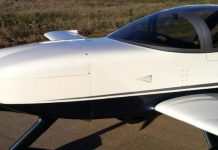