I recently conducted a series of destructive tests to learn more about the factors which affect integrity of builder-fabricated fiberglass joints, and I think other builders may be interested in the results. The tests were conducted on specimens fabricated to simulate the lap joint lay-ups made throughout the Glasair’s construction.

The following is a discussion of my reasons for the testing, and a summary of the test procedures and results. 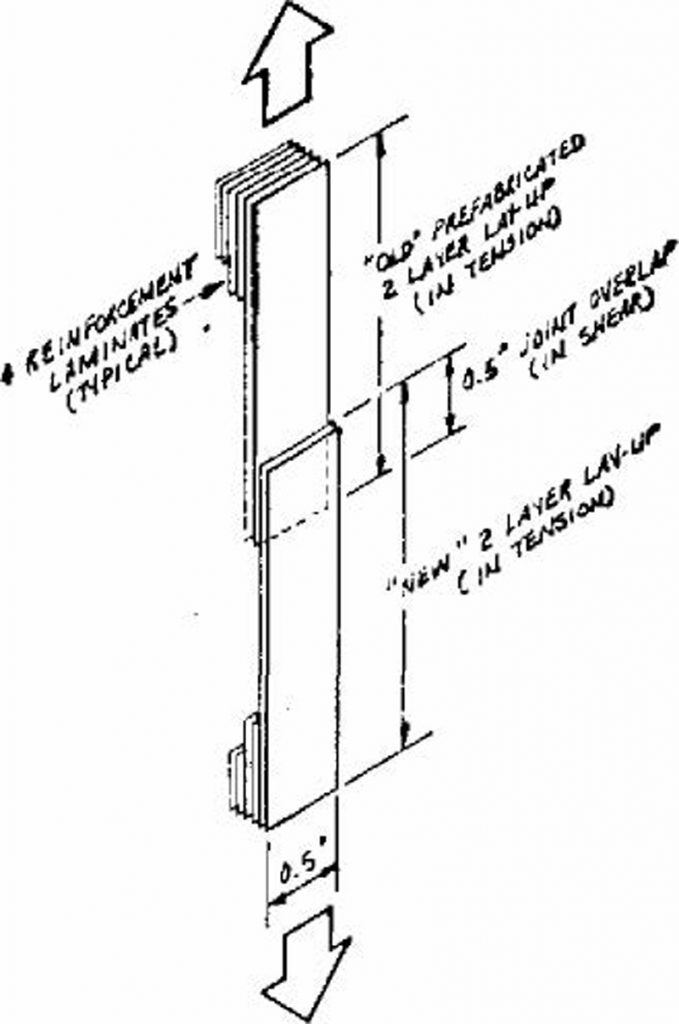 A lot of research has been done on the strength of composite materials and joints made of composites (such as vinylester and fiberglass), and the data base of their mechanical properties continues to grow. This has enabled composite joints to be designed with a good degree of confidence. However, the fact still remains (and always will), that the integrity of each joint is also affected by the particular type of application, and the quality of the fabricator’s work. Dow Chemical recommends that test pieces be fabricated for each type of application, to determine the adequacy of the materials, and fabrication quality for the particular application. It was for this reason that 1 conducted these tests.

As every homebuilder should know, he is the “manufacturer” of his aircraft, and therefore is responsible for insuring that the integrity of his construction is adequate. One important Glasair design feature which the builder fabricates often is known as composite secondary bonding. Secondary bonds are formed whenever a new fiberglass lay-up is made onto a previously cured lay-up (such as seams applied to join prefabricated panels together). I therefore conducted a series of tests to help determine what I, the manufacturer, must do to ensure my composite joints have adequate integrity.

I first identified several important factors known to affect the quality of composite lay-ups. These factors became the test parameters which I varied when fabricating and testing the specimens:

1. Surface preparation of the pre-cured piece being joined affects the ability of the new resin to “grab onto” the old. As discussed in the Fabrication Techniques section of Glasair Instructions, surfaces which have cured long enough to become hard (not gummy) require thorough prep sanding. The effect of this sanding is to increase the surface area where the bond is made, and to clean the surface, thereby increasing the bond’s “grip”.

Wiping the surface with acetone can also affect the joint’s strength by removing oil or other contaminants which would act as a mold release.

2. Age of the resin affects the ability of the resin to wet the fiberglass cloth. Resin from which too much styrene has evaporated may bo too viscous to properly saturate the cloth, thereby resulting in a weak lay-up.

3. Curing time of the new lay-up must be sufficient to ensure that an adequate bond has been formed.

Although the resin hardens soon after being catalyzed, several days at room temperature are necessary to completely cure the lay-up.

Similar specimens were made by varying only resin age, only curing time, etc. All other variables under the fabricator’s control were held constant at standard laminating conditions: 0.75% MEKP, cloth oriented 45 degrees to the applied load path, normal resin-to-cloth ratio (not too wet or too dry), no significant voids, bubbles, or wrinkles, lay-ups applied and cured at room temperature. MEKP and CoNap age was less than 2 years. Each specimen was fabricated to the same size and shape shown in the attached sketch. The cross sectional area of each piece was measured by micrometer for use in calculating tensile stress, and the area of overlap was measured for use in calculating shear stress in the joint.

For each specimen, an increasing tensile load was applied until failure. (Note this load actually subjects the lap-joint bond to shear stress, while subjecting the pieces being joined to tensile stress.) The maximum force before failure was recorded, and the specimen was examined to determine the location of failure and mode of failure (delamination of layers, debonding of new resin from old surface, or tensile failure of the joined piece). Actual stress at failure was then calculated from the measured force and area.

Dow Chemical literature indicates that secondary bonds made with vinylester will be as strong as the primary laminate itself, when properly fabricated. Therefore, the criterion used for determining adequacy of each joint was whether or not it failed by debonding (due to shear stress) before the joined piece failed by delamination or tension. That is, specimens having a good secondary bond will fail in the pieces being joined, not by debonding of the new resin from the old surface.

The following qualitative conclusions were drawn from the test results:

1. Good prep sanding appears to be the most important factor to ensure adequate secondary bonding to laminates which had cured longer than 8 months. Joints made where no prep sanding was done sometimes failed at the new-to-old adhesive interface. However, joints with fair to good prep sanding failed in the pre-cured piece or in the new lay-up. This indicates me joint overlap was stronger (in shear) than the pieces being joined (in tension).

However, Dow Chemical literature warns this practice should not be necessary, and can actually cause poor secondary bonding, if the wiping rag itself contains any oil or contaminants.

2. Joints made with relatively old resin age (19 months total shelf time, 7 months promoted shelf time) still produced good results. It is important to note, however, that this resin had been properly stored to minimize styrene evaporation, and extra care was taken when fabricating these joints to ensure the resin fully saturated the cloth and wetted the surfaces being joined.

3. Curing time of the joint showed no significant effect on strength of the joint, since all joint lay-ups tested had relatively long cure times (ranging from 8 days to 6 months). However, it was interesting to note that one specimen cured for 2 weeks before testing failed in the new lay-up piece at a relatively low stress, after considerable elongation and “necking”. This appears to indicate that the resin may not have reached its full strength in the 2 week curing time.

I do not think these results are particularly surprising.

In general, they confirm other information already published by Dow and Stoddard-Hamilton. But most builders lack the sophisticated non-destructive testing equipment needed to thoroughly inspect joints alter installation. So I do think it helps to learn from these destructive tests, that properly fabricated fiberglass joints should be as strong as the pieces being joined.