When assembled according to the instruction manual. The nose wheel axle is held in place within the nose wheel fork by an AN4-56A bolt and an AN364-428A nut. This AN364 –428A nose wheel axle nut is a shear style fastener. The use of the larger, tension style AN365 – 428A nut is not practical in a Glasair I and II installations since nose wheel box clearance can be very close in these aircraft. The nose gearbox on the Glasair III is wider, but it also can be close depending upon the fire barrier installation. It is possible to get the strength advantages of the tensions style nut without going to the larger sized AN365-428A nut by using the MS21042-4 nut. This nut offers a very high tension strength of 6200 lb. The AN364-428A nut is rated far lower than this.

Because of the minimal cost and labor involved, I would like to suggest that this MS21042-4 high strength nut is a very inexpensive upgrade to your nose wheel installation. Aircraft Spruce and Specialty Company carries this nut. Glasair also carries this nut and can supply it. 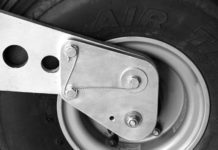