In the fall of 1991 we began using Derakane 470 series resin for manufacturing and assembly purposes which lists a heat distortion temperature of 295-305°F. We have used 470 resin on fixed gear Glasair gear legs for a few years but have resisted its use on the airframe components because of its lower viscosity. (It had a tendency to flow too freely and often caused dry spots.) Dow agreed to make a 470 blend giving us a viscosity which now allows us to use it for manufacture of all Glasair airframe components and for assembly purposes by Glasair customers. Materials property tests conducted on samples indicate that it is stronger than our previously used 411-45 which provides additional incentive for its use. Derakane 470 resin is superior to 411-45 in corrosion resistance and compatibility to aviation fuel (although our earlier 411-45 vinylester was also very good). 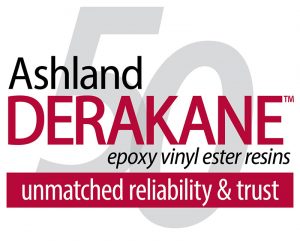 Overall, we are very pleased to be offering Glasair customers a superior choice. Much better capabilities in temperature, by the way, than the oven cured F-155 prepreg used on some other homebuilt designs.

The Glasair’s fiberglass airframe components will have a homogeneous heat distortion temperature of approximately 300°F both with factory manufactured parts and builder assembled joints and seams because the same resin is used throughout The core material used on Glasairs has a HOT of 250°F. For those with earlier kits, this new resin is compatible and will be sent instead of the 411-45 previously used.

It is important to note that HDT wet or Tg wet is not necessarily when the aircraft sits for a week tied down in a rainstorm. Fiberglass resins will absorb moisture to varying degrees and aircraft structures will absorb moisture from humid air in the hangar. Responsible manufacturers and aircraft designers alike will safely use Tg wet as a design allowable (not all aircraft are operated out of Phoenix, AZ). Note that vinylester resin absorbs so little moisture that its HDT is the same dry and wet Fiberglass composite temperature properties continue to be an issue with us because another familiar composite kit manufacturer continues to ‘advertise superior heat and temperature capabilities. This suggests we discuss the facts of me issue once in a while, From a marketing point of view it is easy to advertise a theme such as “high temp, epoxy based pre-pregs” and to the uninitiated reader, it would seem that an oven cured part would have a higher heat capability than a room temperature cured component However, understanding the physical limitations of FRP (Fiberglass Reinforced Plastics) manufactured parts goes beyond simplistic comparisons, especially when considering airframe use.

(196°F if the customer can do an accurate job of post curing all the seams!? How about adding that one to your assembly time!) If temperature limitations are an important issue as raised in nearly all their articles and advertisements, which would educated customers choose? Despite our attempts to educate the aviation public, a RED airplane advertises a message that it can withstand higher temperatures than a white airplane, even though that manufacturer’s own instruction manuals, page 459 states that darker colors (as on their company plane) are absolutely not recommended. In fact by policy, they prohibit dark base colors.

We are continually answering questions from kit builders about why they should not paint the Glasair dark colors.

Even “well informed” aviation writers often incorrectly assume the Glasair has greater temperature limitations because we paint them white. We could counter by painting our demonstrators red or black.

Our company policy is to lead by example and we believe that white or light colors leave the composite aircraft owner with a necessary margin of safety between the energy absorbed by skin surface colors and the minimum temperature limitation of the materials used for structural or critical purposes.

A dark red airplane on a 100°F day will see skin surface temperatures of approximately 190°F according to studies conducted by DuPont, the Soaring Society of America and FAA charts. 190°F is way beyond the worst case scenario of 149°F (Tt wet) listed for F-155 pre-preg. (Oven cured to 250° or not!) Even white surfaces are elevated to 130°F on a 100°F day.

The FAA requires a minimum 50°F spread between the maximum possible skin surface temperature and Tg wet for certified composite aircraft. Even though with 250° core and 300° resin capability, we could consider painting the Glasair red while the (un-named) plane should be painted white, Stoddard-Hamilton will continue to promote white to our customers and the rest of the aviation community as an example of maintaining wide margins of safety.

Vinylester 470 resin is commonly used for the manufacture of swimming pools because of its superior moisture resistivity. Likewise, it is impervious to all grades of auto and aviation fuels and used for the manufacture of underground fuel tanks. The Glasair’s fuel tanks are integral and do not require the use (and extra weight and cost) of sloshing compounds as do those composite kits which use epoxies, Dow Chemical formulated vinylester resin for its own use to solve having to replace its rubber lined stainless steel chemical vat tanks every five years. Replacement tanks made of vinylester resin have been in service for over 25 years now! User Friendly This ambiguous term is widely used throughout the fiberglass/composite kit industry because the use of some chemicals and resins on bare skin can be unfriendly. In 12+ years of manufacturing Glasair kit parts, we have yet to have a single employee report a case of skin sensitivity or allergic type reactions. Likewise, we have not had any reported cases of Glasair customers experiencing problems with vinylester resin. Some have had to abandon epoxy based projects because of the side effects yet have had no reaction to vinylester resin. Epoxies, even with the trade name “safe”, are a bit of a misnomer compared to vinylester resin. While “safe” epoxies are an improvement over earlier epoxy resins they still cause a negative skin reaction in many users who get direct exposure.

With respect to the common choices assemblers of composite fiberglass kitplanes have, vinylester resin is by far the most user friendly.

Summary: We include the above information on materials physical properties for our customers’ knowledge and the fact that we rely more on word of mouth sales than large advertising budgets. As potential customers approach you and ask questions regarding these issues, it helps us tremendously for you to be well informed and armed with the facts.

We would rather avoid discussing competitor’s products and concentrate on our own, but faced with the continued issue raised when they misleadingly choose to paint demonstrator aircraft appearing in advertisements unacceptable colors we can only answer the questions which arise with factual responses and we encourage Glasair builders to be factual in your discussions as well.