Ever had a tail wheel shimmy on you? If you haven’t, consider yourself lucky and know your time will come if you fly taildraggers for very long. The tail wheel shimmy can be one of the most annoying aspects of having a tail wheel aircraft. A perfect landing followed by a raucous, rattling, vibration, that threatens to shake the tail off the airplane and doesn’t quit until you have almost brought the aircraft to a complete stop, is disconcerting at the least, and dangerous at the worst. You may have noticed the tail wheel shimmy on other aircraft when they land. Sometimes the wheel will spin completely around the steering axis as the plane skips down the runway. I had a tail wheel shimmy so bad that it broke the center bolt on the tail spring. I realized this had happened after a particularly bad shimmy, and I felt the rear of the airplane settle as the rudder impacted the tail wheel making the aircraft impossible to steer. Luckily there wasn’t a crosswind that day and I rolled out and stopped on the runway. The pilot in the NTSB report below wasn’t so lucky.

“The pilot stated that he was returning from an aerial application practice flight, in a tailwheel-equipped airplane, to practice wheel only touch-and-go takeoffs and landings. The first four landings were uneventful. During the fifth and final landing, the airplane touched down and bounced approximately one foot into the air. The airplane stabilized and the main wheels touched down for a second time. As the tail wheel touched down approximately two-thirds down the runway, it started to shimmy “violently” and the airplane veered to the left. The pilot corrected the airplane back to the right. The intensity of the shimmy increased and despite the pilot’s control inputs, the airplane exited the right side of the runway and ground looped. The airplane’s left wing was substantially damaged. Post-accident examination of the tail wheel assembly revealed wear on the locking mechanism. Additionally, “snake-like” skid marks were found on the runway that appeared to be the result of a tail wheel shimmy.”

What causes shimmy and what can we do to fix it? That is what I hope to explain in this tech note.

There are many types of tail wheels out there. This discussion is aimed at those that incorporate a tail spring as the principal support and shock absorption mechanism. Several things can cause an otherwise stable tail wheel to shimmy. These are: a change in the castor angle due to a bent tail spring; loss of friction in the dampening mechanism; or additional play in the swivel mechanism, due to wear or improper maintenance. Other things that may contribute to shimmy in a tail wheel are: tire pressure, type of rudder springs and tightness, and load on the tail wheel, although these are typically secondary consideration in the shimmy equation.

Lets talk about the wheel castor angle first. The castor angle is the angle measured between the tail wheel swivel axis and a line perpendicular to the ground. This is shown in Figure 2. Positive castor, which is what we want to see in the tail wheel when it is loaded, is when the axis drawn through the swivel bearing, is tipped forward at the bottom of the swivel and rearward at the top of the swivel, as shown in Figure 2. You can see that as we add weight to the aircraft and the tail spring deflects, the positive castor will decrease, so we want to make sure that we maintain positive castor even after the aircraft is loaded. Don’t over do it though, because too much positive castor makes the tail wheel difficult to steer. A tail wheel with negative castor is more prone to shimmy, but not all tail wheels with negative castor shimmy. Why is that? There is another part to this story and that is called trail. Trail is the distance between where the steering axis intersects the ground and where the wheel touches the ground. As the castor is moved in the positive direction the trail is increased. Increasing the amount of trail increases the speed at which shimmy occurs and if this is above your takeoff and landing speed, then voilà, no shimmy. A tail wheel with enough trail may not shimmy even with a negative castor. Another factor is friction, and that is what we talk about next.

All dynamic systems want to oscillate under the right circumstances, it is a fact of nature. Friction is the reason that they don’t, or if they begin to shimmy, it is quickly dampened out. Friction is inherent in all mechanical systems, but in many cases, additional friction is required to prevent vibration of the system at the desired operating parameters. This is often the case in tail wheels and that is why many of them have a built in shimmy dampener. Examples of this are shown in Figure 3.

The next cause of shimmy is wear in the moving parts or in some cases the nonmoving parts of the tail wheel. A worn rubber block on your spring mount can change your castor angle from positive to negative and that can lead to shimmy. Wear in the swivel bearing can lead to play and produce a shimmy. Tired pressure plate springs and worn pressure plates can reduce dampening and lead to shimmy problems. Basically any type of looseness or play can change the dampening or spring constant of the tail wheel and promote shimmy. So keep your tail wheel well maintained and lubricated.

Other things that affect tail wheel shimmy, but are not principal factors in shimmy are rudder spring tightness, tire pressure, and load on the tail wheel. Tight rudder cables and springs can reduce the possibility of shimmy because they increase the dampening in the system. The down side is that this can make tail wheel steering overly sensitive and is not recommended by some manufacturers. Figure 4 shows two rudder springs of different sizes that are intended to help dampen tail wheel shimmy by changing the frequency response of the system. Tire pressure can also affect shimmy. Changing the tire pressure can change the response of the system. It does this by changing both the dampening and the spring constant of the system. The problem with this approach is that the tire should be run at the proper pressure to insure longevity and proper performance and a properly rigged and maintained tail wheel should not shimmy with the correct tire pressure.

The amount of load on the tail wheel also affects shimmy. The greater the load, the greater the propensity to shimmy. That is why you can often times stop a shimmy by pushing forward on the stick and reducing the load on the tail wheel. A properly designed tail wheel should not shimmy under normal loading conditions, but may shimmy when overloaded. An overloaded tail wheel may also result in a deformed tail spring, thus changing the castor angle and cause a shimmy even after the overloaded condition is corrected. Speed also causes shimmy. The higher the speed, the more energy there is available to overcome friction and energize the shimmy. That is why sometimes you can ward off a shimmy by keeping the tail up as long as you can and only lower it after you have slowed down below the shimmy speed.

In conclusion, tail wheel shimmy can be caused by a number of factors, such as negative castor, inadequate trail, insufficient friction or dampening, and worn parts or excessive play. One of the most common problems, is a tired tail spring that results in a negative castor and less trail. Re-bending or replacing the tail spring should take care of this problem. Most high quality tail wheels incorporate some sort of dampener or friction mechanism. These help to prevent shimmy and should be properly maintained. Finally, proper maintenance and elimination of play in the tail wheel assembly will help to prevent shimmy and assure a long operational life for your tail wheel. 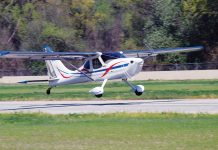 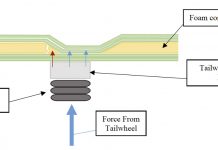