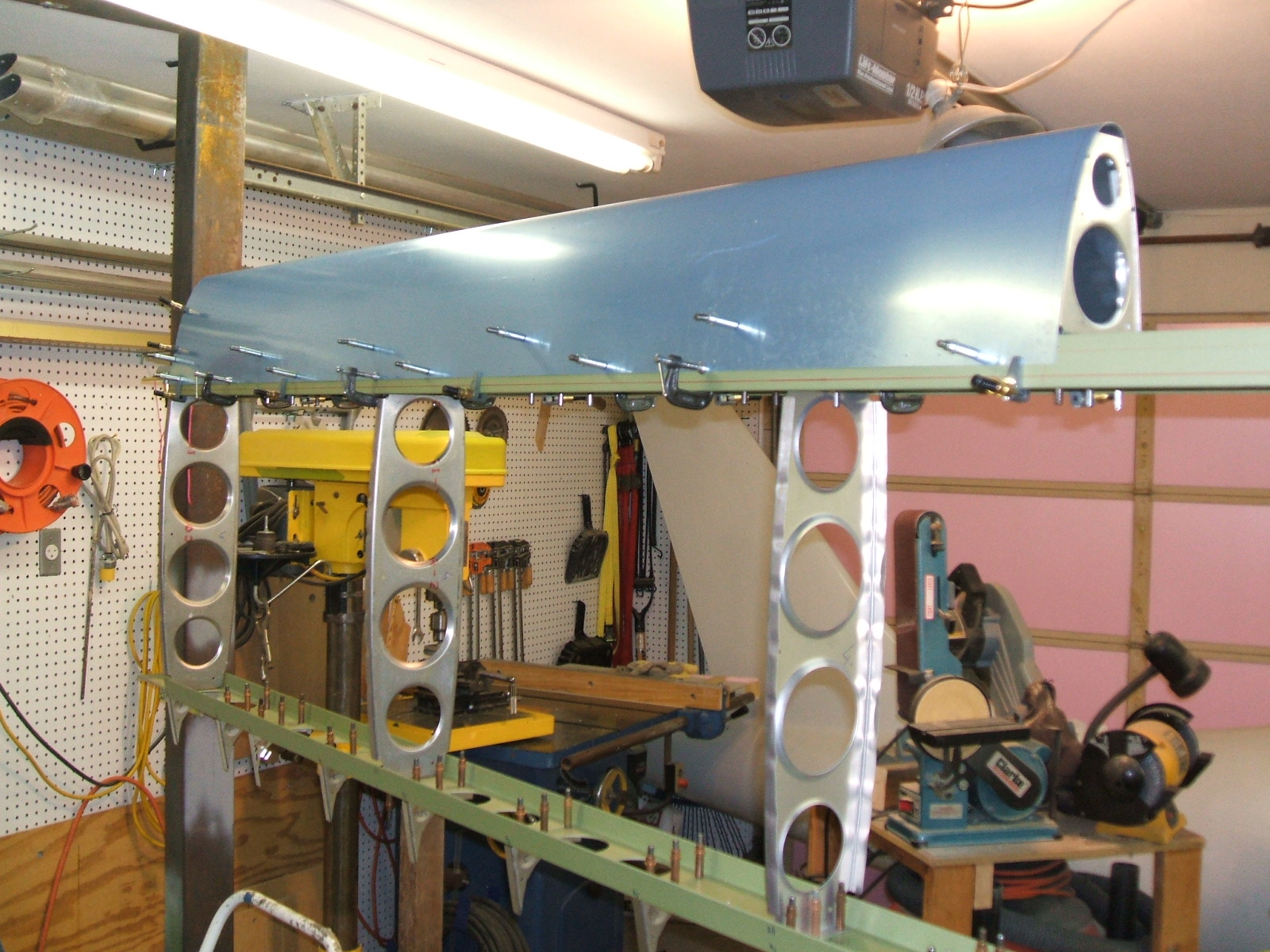 Skin/rib fitting: I’m sharing my experience with horizontal stabilizer skinning, for the benefit of anyone else who’s having trouble pulling the skin far enough aft to align the rivet holes with the spar flange centers. I found that an unreasonable amount of force was required to draw the skin back so that the forward spar lower rivet line was at least 1-1/2D from the flange bend, much less bring it back to the pre-drawn line. The chief cause of the problem was the bend radius over the nose ribs. To alleviate this, I reduced the width of the forward end of the nose rib by fluting the nose rib web with a pair of fluting pliers. This reduced the dimension by less than 1/32, which was enough to make a dramatic difference in my ability to draw the rivet lines aft. Since the nose ribs are basically formers (not significant structurally) I don’t see any drawback to this, as long as it isn’t overdone.

This will help solve all nose rib/skin problems: Avery sells a set of fluting pliers built on a set of vice grips which are ideal for this task since you can be assured of fluting each rib identically. (Credit this idea to Orville , Elliason Ontario,Ca.)

Rib alignment: Here is a tip that may be useful as an aid in lining up nose ribs. I first used this technique on the wing nose ribs, but the same approach could be used for any of the GlaStar nose ribs, i.e., horizontal stabilizer, ailerons, and flaps. I generally use the push-pull rib alignment probe tool described by SH in the General section of the assembly manual and found it to be OK. The only problem I’ve had was that sometimes the nose ribs require a lot of force to move them into alignment, even if only a minor adjustment is needed. The excessive force required to move a rib is caused by the nose rib being tightly clamped by the skin. I found that putting a strip of clear packaging tape over the rib flanges provides a smooth, “slippery” interface between the rib and skin. Consequently, it takes much less force to slide the ribs into alignment and, as an added benefit, protects the skin from scratches caused by moving the rib directly over the skin. The tape is not thick enough to cause a skin to rib fit problem. The tape I have been using is readily available clear packaging tape (brand name – 3M Mailing Tape). The tape must be clear so the rivet line won’t be hidden from view.