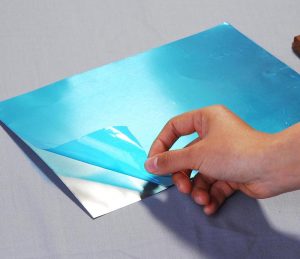 While building and storing the various pieces of your GlaStar it is advisable to leave the white protective coating on the skin sections as long as possible, until you are really through and are ready to use the finished part.

Peeling strips of this material to expose the rivet holes for assembly is greatly simplified by the use of a 25 watt soldering iron, which can be used to scribe fine lines of melted material, leaving an easily peeled strip of controlled dimensions. This is much safer and neater than trying to control an X-Acto knife or razor blade. Polish the tip first to avoid scratching the aluminum.

I chose to remove the protective film before starting assembly for two reasons. The first being that it is difficult to pick up any damage i.e.: depressions or ripples with the film intact. The second reason being that when setting up the assembly it is much easier to recognize misalignment in either the ribs, hat sections, or any other sub skin parts by visualizing the reflective pattern on the surface.

I found a neat looking way to remove just enough of the blue protective cover to allow room for the rivet. What I used was my metal hole templete gauge and a rounded off small soldering tip. Just insert the small tip inside the hole (of your size) and move the tip around. Do this for all the holes and then use your finger nail to remove the blue little dot. Sure looks neat and clean.