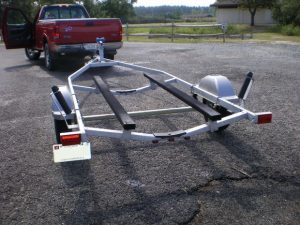 Use of boat trailer for crate pickup: Living approximately 70 miles from the closest Consolidated Freight yard, the cost of a rental truck or a tilting flat bed truck (tow truck type) was considerable. So instead, having a boat, I temporarily altered my boat trailer (with the boat off – ha) by cutting 2″x6″x6′ boards (4 of them) and placed them on top of the boat skids, perpendicular (90 degrees). One was placed aft, one placed fore, and two placed in between (where the trailer skids were attached to the trailer beams). Since my boat skids have a slight arch (to match the boat hull design), I build up some of the 2x6s by doubling them or by adding a 1×6 until a taught string ran on top of the boards from fore to aft resulted in a fairly level plane. These were then secured to the trailer skids by using some flexible metal straps long enough to fit from one side of the board and around the trailer beam to the other side of the board. This prevented the boards from shifting fore or aft during travel. Very cheap! CF placed the crate (about 18 ft long) on my trailer using two fork lifts. I used three 15′ straps placed over the crate and clamped to the trailer sides to hold it down. I also used two large eye-bolts by (using my portable drill to pilot holes), screwing one each into the left and right front end of the crate skids. I then ran my trailer winch strap through one eye-bolt and then the other, and then back to the winch, and tightened (to help prevent the crate from shifting backwards). The crate overhung the trailer about three feet but this was not a problem (I remembered to bring a red flag). Once home, I simply left the crate on the trailer until the contents were unpacked. Should anyone consider using this idea be sure that your trailer can handle the size and weight. In my case, the actual weight of the crate was considerably less then my 21′ ski boat.
–Steve and Jill Jakulski

Unloading that huge crate: I got my fuselage kit unloaded yesterday. It had arrived at the local Consolidated Freightways yard. CF didn’t play any games with shipping charges. I paid $738 for shipment from S-H to San Jose – including a small hazardous materials surcharge. Owners picking up or accepting delivery of their crates should know that CF demands cash or a money order, and requires photo ID.

CF was going to charge $75 extra for delivery by “lowboy” – a low flatbed truck – but the fuselage crate – at 16′ – was too long for their truck. I spotted a towing service winching a car onto a tilting flatbed truck and asked if they would move my crate. The operator agreed, and charged me only $60. This turned out to be an excellent way to move the crate from the freight yard. CF pushed the crate onto the truck with a forklift. The length of the flatbed was just enough to accommodate the crate. When we got to my garage, the operator expertly lowered the crate off the truck onto the driveway. The crate was never dropped – it was simply maneuvered to the ground using the tilt mechanism and chains. After the towing operator left, three of us took two hours to dismantle the crate and put the fuselage kit into the garage. Everything went easier than I thought it would. If CF had delivered the crate on a typical interstate truck it would have been a major problem to get the fuselage kit unloaded. In short, I recommend the hinged/tilting flatbed truck method.
–Vaso Bovan