On our last fuel stop coming home from our Idaho adventures I was landing on a long runway with breezy conditions at KTKX. Due to the heavy load I’d been carrying in my GlaStar and trying to mitigate the tail wheel shimmy problem, I had been doing half-flap wheel landings when landing on pavement trying to hold the tail up as long as possible. My normal landing technique is to use full flaps and 3-point. On base I added my one notch of flaps and had a bit extra on the airspeed for the wind gusts. 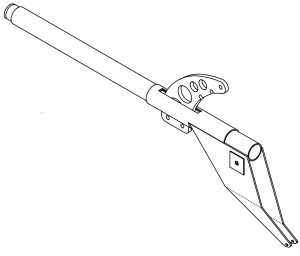 Just prior to the threshold we hit a sudden gust/thermal and I recall hearing a thump (like oil canning) but what really caught my attention was the bottom falling out of the airplane. The sink rate was very high and fortunately I had enough time to give it a healthy burst of power to arrest the sink and recover for (what turned out to be a no flap) landing. I didn’t realize at the time that the bump/gust/thump briefly unloaded the wing and the flaps as well.

The sound I heard were the flaps slamming up. Maybe the flap handle detent wasn’t all the way in? — I don’t know, but the net effect is that on roll out I found the flap handle retracted. This is the first time in 1300+ hours that I’ve had this happen. I have the titanium shark fin so I doubt there’s much wear there. I suggest everyone makes a big push down of the flap handle part of their before landing routine.

This could’ve ended badly had it happened any closer to the ground.