On a very windy, gusty Saturday Bill Janes and I flew to a nearby airport to attend an EAA Chapter meet ing. Because I learned to fly in windy conditions and we were flying Bill’s trike GlaStar, I found the wind and gusts enjoyable. Since we’ve studied normal takeoffs and landings in previous articles in this series, what about crosswinds? Here is where the GlaStar’s remarkable control at slow speed is very helpful. Successful takeoffs and landings in a crosswind involve the pilot’s skill, the aircraft’s capability and the airport ‘s circumstances.

Regarding pilot skills, back while I was learning to fly, winter came along and brought lots of windy days to our single runway. Since I was planning to be a jungle pilot, my instructor encouraged me to learn to successfully fly in all types of wind. At first, he had me flying down a long runway at a constant slow airspeed at 40 feet or so in calm air. I maintained my chosen airspeed using the elevator, kept the wings level with aileron, stayed on centerline with rudder and added or removed small amounts of power to stay level. He gradually brought me down until I could skim the runway’s surface for its full length without touching. Eventually, with practice, I found that gusts could be countered by adjusting power and flight controls as necessary. I discovered later while flying floatplanes that the wind gusts could be seen blowing across the surface of the water. Nevertheless, adjustment of the aircraft was still with stick controlling airspeed while power controlled altitude. Stay away from whirlwinds or mighty winds. Great pilots learn to say no.

One-wheel takeoffs and landings in a crosswind are really amazing in the GlaStar and it does them better than most aircraft I know. I believe it’s because of the great aileron’s (read roll) control below stall speed. Start the ground roll with the stick held towards the crosswind with the proper amount of opposite rudder to keep the GlaStar straight. As the speed increases to 30 KIAS or so, roll the GlaStar onto the upwind wheel and simply hold it there until the airplane is five knots above normal lift-off speed.

Then lift off quickly with up elevator so no tire scrub occurs on that one wheel. As the climb is established, lift the lowered wing, coordinate the controls for an effective climb and “crab” into the wind to maintain centerline on departure.

The same is true for landing. Hold 65 KIAS on final.

Crab into the wind and see if you can hold the centerline of the runway as projected through the center of the GlaStar.

If you can’t hold the wings level or keep the airplane on centerline, then you or the airplane has reached its limits. If possible, find a runway more into the wind. The wind will usually change direction and speed, as you get closer to the ground, so keep changing your control accordingly. About 50 feet above the ground and on centerline, I’ll lower the upwind wing and start applying opposite rudder. The wing is lowered enough so that the airplane cannot drift downwind and opposite rudder is applied enough so the airplane cannot turn upwind. Since the speed is changing, the amount of control is changing as required. In a high, gusty wind I’ll be moving the control stick like Isaac Sterns playing his violin while applying or removing power to control the descent. Go ahead and land the GlaStar on the upwind wheel (either trike or tail dragger) ten knots faster than normal (at least 50 KIAS) and hold it firmly down while reducing power and then the other main wheel will come down. In a strong wind, with the trike, the nose wheel may be the second to touch followed by the other main wheel. Once on the ground I like to retract the flaps to firmly “plant” the GlaStar® and allow for better braking. In the landing process if you bounce badly or a gust picks you up after touching down, apply power, get away from the ground, reestablish the correct airspeed and start over again. Don’t just sit there waiting for the airplane to settle by itself. This is where and when many accidents will tend to occur.

In a high wind, “fly” the airplane while you’re taxiing.

Keep the stick pointed towards the wind if in a trike and elevator back if in a tail dragger. Once a Boeing 707 decided to do a runup on the passenger ramp while I was taxiing behind it. I let my tail dragger (Helio Courier) swing in the jet blast and held brakes. The tail came up and I literally “flew” on the ground until the runup quit. Not a happy pilot but fortunately I was adept. Always be ready to fly your GlaStar when taxiing. 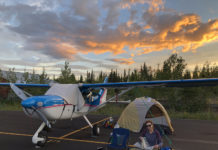 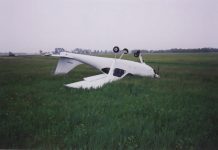