My III has always been difficult to touch down gracefully, perhaps because of my long flaps. My flap-dump button switch on the throttle is a real help, but in the last bit of the flare as I keep the nose up, it drops abruptly. After observing the strakes on the Boeing 737 and 777 which generate a discrete vortex over their wingroot upper surface, I thought I’d try it. I put a 3″ x 8″ strake 5-1/2″ ahead of the wingroot, 3/4″ below chordline, aligned with the waterline on each side. It is of .063″ aluminum, fastened to the fuselage just behind the firewall with carpet tape and two small screws. It works!! I tied a small string to the strake trailing edge (36″ long) and observed it in near-stall flight. I moved the strake three times to get the vortex (string) positioned correctly in the wing-fuselage intersection. Now as I pull the nose up in flare it settles gently instead of dropping. See photos. 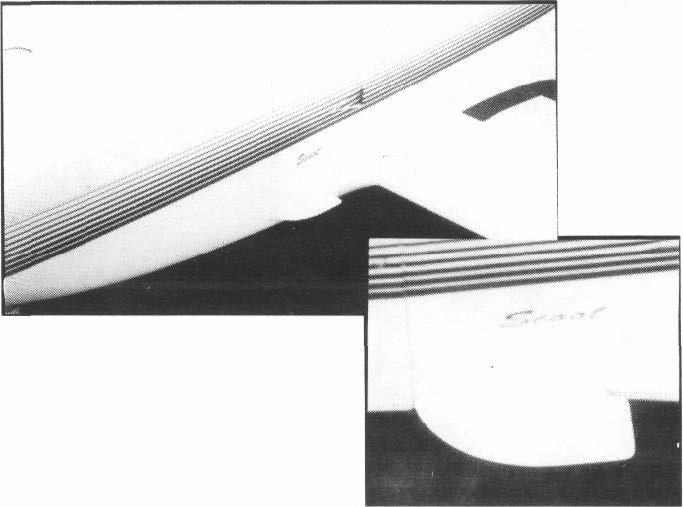 Brake discs don’t always run as true as they should. I used a spare axle and put the wheel and disc assembly on it. disc side-up, on my bench. With a dial indicator I measured the axial runout. I rotated the disc on the wheel to all three possible positions and used the one with the least run-out. This got the run-out down to .003″ and it stopped the vibration I had on braking. I bought the Cleveland brake upgrade kit mentioned in the newsletter several months ago. It’s a definite improvement. One thing bothered me though—the piston projects far out of the cylinder because of the thin lining and the insulating shim. So I riveted a .125″ aluminum shim on the backing plate, so the piston is now in the normal retracted position.

I’ve experienced premature gyro mortality, both DG and AI. While one of them was out for service I observed in flight through the open hole that the other was vibrating resonantly with engine RPM, something I never suspected. I cured it by putting a wood block between them at the forward end where they’re unsupported. Now they don’t vibrate and I expect longer life for them.

Carbon monoxide has always worried me, and I think I’ve found a good detector for it. It’s called “Code-One” and it costs only $20. It’s available at such places as Home Depot alongside the smoke detectors. It’s made for household use, comes with a small 110V AC-12V DC converter, which I discard. Connect it with a 1 amp fuse and mount it on left sidewall in front of your knee (out of the way but visible). It has a buzzer you can hear through your headset, and a light. I found that I was getting exhaust reflux in climb, but it’s OK in cruise. I’m still looking for the leak.

Ellen and I have 660+ hours on our III now, and it’s a great pleasure to us. We fly every week, mostly in the local western states. It never ceases to amaze us how fast and comfortable it is.

I’m constantly trying to improve and upgrade it—it’s part of the continuing process of building a Glasair.