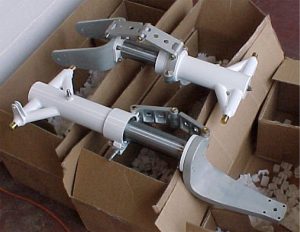 The Technical Support Department has noted a significant increase in builder questions related to the Glasair I kit . Although this design has been out of production for over 10 years, there are still many of kits being built. We also get a large number of calls from flying G-I owners related to maintaining their aircraft. Although the G-I is the Grandfather of the present Super II-S series of aircraft it gives up nothing in efficiency and economy.

There is a great amount of commonality both in the design and components between all Glasair models, which does much to ease the replacement part situation. The most sensitive parts area is undoubtedly the Retractable Gear model G-I. There have been a couple of different RG gear vendors, and even then slight variations exist in their configuration over the life of the Glasair RG production. The following discussion seeks to provide a broad over- view of the possible gear differences, but more importantly what replacement parts may be available in the event the RG gear is ever damaged.

NOTE: The Technical Support Department of S/H does maintain a partial inventory of parts that are no longer in production. When seeking replacement parts for Glasair I aircraft (where no part number system was in common use) it is often easiest to contact the Tech Support Department to confirm part names and obtain part numbers for the components. In most cases, information or questions as to availability and possible substitute parts, should also de directed to the Tech Support Dept.

The landing gear struts used on the Glasair I and II aircraft have been fabricated by two different vendors. All G-I and some early G-II were fabricated by our original vendor (Aro-Tek) and all subsequent G-II and III gear were made by our present vendor (Northwest Dynamics Inc. (NDI)). The original (Aro-Tek) gear was constructed in two different versions, one with an all welded trunnion (the most common style) and  a second with a Machined aluminum upper trunnion. The design of these two gear legs is sufficiently different that they require different length side brace units.

The manufacturer of a gear leg can easily be identified by determining the style of securing device used to hold the chrome oleo in the trunnion body. The Aro-Tek built gear uses a threaded brass nut screwed into the base of the trunnion, while the NDI gear uses a snap ring. A custom spanner wrench is required to remove the brass nut in the Aro-Tek gear.

Seal kits are available for all RG gear leg styles that have been supplied by Stoddard Hamilton Aircraft. Replacement seal kits can be ordered by contacting our Parts Order dept. (Be sure to specify whether you require the Aro-Tek or NDI seal kit) Each strut seal kit is sufficient for one strut.

The Glasair I (Aro-Tek) gear components are no longer in production and very little spare part inventory remains. The most common damage seen on the G-I RG gear is bent or damaged chrome oleo struts. Original (Aro-Tek) parts are not available; however, chrome oleo struts being produced now by NDI can be retrofitted with the following modification. To use the NDI chrome oleo, the original  metering  piston within the gear leg must be machined to the internal diameter of the new oleo, or a new NDI meter- ing piston can be installed.

The Aro-Tek landing gear used two different styles of oleo strut installations. The most common style had the oleo attach to the half fork on the top of the half fork. In the less common installation, the oleo passed through a large machined hole in the top of both the main gear half fork and the nose gear fork. This pass-through model of oleo strut is a different length than the mount-to-the-top style and is no longer available. If this pass-through style oleo strut needs to be replaced the bolt-to-the-top style of fork or scissors must also be purchased.

All parts of the NDI gear are still in production. Stoddard Hamilton does try to maintain an inventory of replacement parts. But because of long lead times and the high cost of stocking these parts, the supply is limited and it is possible that some parts may not be available until the next production run of gear is completed. Since all gear legs are stocked and inventoried as sets we cannot disassemble a gear leg to obtain parts.

The most common type of damage to the main landing gear upper trunnion is the break- ing off of the side brace stud. We have recently developed a method and produced the necessary parts to replace the welded in stud with a threaded stud. Details of this repair procedure are available by speaking with Stoddard-Hamilton Technical Support Department.

Experience has shown that the vast majority of accidents which damage more than just the side brace stud of the upper trunnion will have been severe enough to also have damaged the internal components. Therefore a dam- aged upper trunnion will likely mean the entire landing gear leg must be replaced.

Since no complete Aro-Tek gear legs are available, replacement gear legs will be of the present NDI production. The use of an NDI main gear leg to replace the Machined Upper Trunnion Aro-Tek gear leg will require new side brace arms, and may also require possible trunnion bear- ing location changes, and possible bellcrank position changes (We have never had to retrofit a builder with this combination, so exact details are yet to be worked).

Since these aircraft use gear legs that are currently being supplied, obtaining replacement gear legs would be accom- plishing by using spare parts inventory or, if sufficient sets of gear legs exist in stock, a set would be broken up to provide required legs.