As FAA and National Transportation Safety Board reports can take up to one year to be published, advanced publication of accidents in this column do not contain alt the facts and information necessary to draw definitive conclusion. Rather, these accident briefs are intended to bring the circumstances to the attention of Glasair builders in the interest of improving safety. They are not intended to judge the ability or capacity of any person, living or dead, or any aircraft or accessory. We appreciate the willingness of Glasair builders to share their experiences with others so they may have the opportunity of avoiding similar circumstances.

We are again happy to report that there were no injury accidents this quarter. However, we do have one accident and a couple incidents that may be of interest to you.

According to the owner/pilot, he was landing and applying brakes when one of his brakes suddenly went flat. Light brake application and opposite rudder was not enough to slow the aircraft and keep it on the runway. Rough terrain resulted in extensive damage to the undercarriage. Subsequent inspection of the brake indicated that the Nylaflow brake line failed near the the brake caliper. The line had become brittle, possibly from the heat radiating from the brake disc. Stoddard is currently writing a Service Bulletin to install a short section of aluminum tubing to get the Nylaflow tubing away from the high heat zone area. 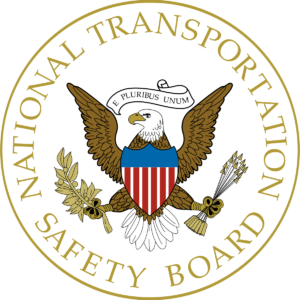 Another incident that occurred this summer was just prior to the Arlington Picnic. On July 6th Jeff Werali, Lance Turk, and myself were practice flying in preparation for the missing man formation in honor of Bob Herendeen, for the Arlington Airshow. Jeff was the leader, flying his Glasair I TD with Lance flying off his right wing in his beautiful FT. I was flying off Jeff’s left wing in our Super II-S RG demonstrator. We were just turning from a base to final for an overhead pass when out of the blue came a flock of about fifty starlings headed directly at us. I saw them out of the corner of my eye as I was concentrating on holding my position off Jeff’s wing. Jeff took three direct hits, maybe four. The amazing thing was that none of us broke formation and I didn’t even see the slightest flinch of movement in Jeff’s controls. He just calmly came on the radio and said “I think I better land and check this out guys” so we did.

Upon inspection Jeff had direct hits on his right wing leading edge, the windshield (pilot side) and the left forward baffling plate inside the engine compartment. An additional possible hit may have occurred on the inboard end of the left wing leading edge due to some evidence of blood and feathers. It took a rubber glove and a garden hose to clean out the engine compartment, (not a pretty sight). Miraculously, the only visible damage was a 2″ diameter dent in the engine baffling.

Due to some very quick thinking and skillful actions by Jim Muldoon and Cal Spangler in our Service Center, a potentially destructive fire turned out to be only a minor incident.

We were in the process of calibrating the Vision Micro-Systems fuel probe in a customer’s Glasair E. A two gallon plastic bucket was being used to pour fuel into the right wing. The aircraft master was on to take the calibration readings. The aircraft was staged on the ramp outside of the hangar. Jim had just finished pouring the fuel into a funnel made out of a metal gas can, which had the bottom removed. A chamois cloth was being used over the can as a filter. The metal can was inverted with it’s plastic nozzle in the right wing filler cap.

A snap was heard and suddenly the can burst into flames. Jim immediately ran to the hangar door to get the fire extinguisher while calling for help. Cal, who was sitting in the cockpit, exited immediately. He then ran over to the fire, and instinctively knocked the flaming can off of the wing, away from the aircraft while Jim followed with a shot from the fire extinguisher to blow out the remaining flames that had spread across the top of the wing. Once assured that the aircraft was out of danger he proceeded to put out the fire on the ground. Thanks again Jim & Cal for your quick reactions.

No damage resulted from the incident. We are still uncertain about the ignition source however it may have been static discharge. The aircraft was modified with custom bonding straps built into the structure, bonding the metal fuel cap sleeves to the rest of the metal parts in the aircraft. However the aircraft was not electrically grounded at the time.

Stay alert for the unexpected and always try to have a plan of action should something out of the ordinary happen. Always have a fire extinguisher close by when it comes to aircraft fuels. While doing a fuel calibration or similar operation, use all metal components that make electrical contact throughout the transfer of fuel to eliminate the possibility of potential static buildup. Ground the aircraft and the fuel transfer container to a good ground source and do it outside. The outcome of the fire mentioned above could have been much worse if it had occurred inside a hangar.