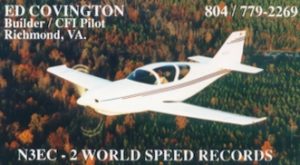 I am a 1982 homebuilt Glasair from Washington State. My parts were designed by Tom Hamilton and fabricated by his company, Stoddard-Hamilton Aircraft, Inc. They are a fine and dedicated company that I am proud to have as my heritage. At my birth, Stoddard-Hamilton Aircraft was located adjacent to the Cedar Grove Airport, more commonly known as the “Pig Farm”. Shortly after my parts were fabricated the factory moved to Arlington Municipal Airport north of Seattle.

Ed Covington of Old Church, Virginia (just outside of Richmond) ordered me the very day after he had flown with Don Conover in his Glasair down at Merritt Island, Florida. Apparently Ed was really impressed with the high performance of Don’s Glasair. That was fortunate for me since Ed had earlier been considering a Falco, because of its wood construction and his long time hobby of making Colonial reproduction furniture.

I was carefully packaged up and shipped to Ed in March of 1982. After a week or so ride across the country, I arrived at Ed’s home on Wednesday, March l6th When the truck driver learned that I was a kit plane in a 25′ long plywood box, he asked how I was to be taken to the airport upon completion. His concern resulted from the difficulty in getting his 18-wheeler down and out of Ed’s long and narrow driveway, which is located in the woods with no open spaces. Ed replied that I would be flown on “knife edge” down and out of the driveway. The truck driver scratched his head in disbelief and continued on with trying to get his rig turned around and out of Ed’s driveway.

Ed immediately christened me with my new name – “N3EC”. The “N,’ signifies my American heritage. The “3” stands for the number of members in Ed’s family; his wife, Barbara, and daughter, Ashly. The “EC”, of course, stands for Ed Covington.

After unpacking and inventorying my parts, Ed immediately started my construction. He set a goal of trying to work 20 hours a week on me and usually this meant that we were routinely up past midnight. Ed built my horizontal stabilizer first in accordance with well-written Stoddard-Hamilton instruction manuals. He followed with my wing construction in his basement wood working shop, where he had built a sturdy and accurate jig cradle frame that was very comfortable. My fuselage was constructed in an extension to his tractor shed that he had previously built especially for me. Ed equipped me with many neat features including:

Ed worked lovingly on me for 2360 hours over 3-1/2 years. He had the local EAA chapter (Chapter 231) meetings in his home several times during my construction so they could inspect and check on my progress. Finally in May of 1986, I was carried to Richmond International Airport (with my wing removed and tucked along side for clearance down Ed’s driveway) for final assembly. It was only a few days before Ed had me back together and ready for our first flight on Sunday morning June 1st

That first flight was exhilarating! We took off and climbed immediately to 5000 feet over the airport where we stayed for 1.3 hours. Everything was perfect except for a minor fuel leak in the main tank back-up mechanical gauge, which is located between Ed’s knees. Ed said the fuel vapors burned his legs a little, but in comparison to the excitement of my first flight, it was nothing. We went on to fly the FAA required 30 hours in a designated test area before being signed off as “certified” on June 27th. The following day I had my first passenger, Ed’s daughter Ashly, who was 11 years old at that time. We flew to Cape Hateras, NC for an afternoon on the beach. On the following day Ed moved me to New Kent Airport (W96) where I was to have my own private hanger with a carpeted floor.

That first year was thrilling. In late July we made our very first trip to he EAA convention in Oshkosh Wisconsin. How nice it was to be parked among other Glasairs just inside the main flight line gate. Jerry Gruber’s Grand Champion and was parked only a few planes away in the same row (Ed had loaned Jerry one of my parts back when he was ready for his first flight). The Stoddard-Hamilton people seemed so pleased and happy about our arrival. We only stayed for four days before heading back to Virginia. On the way back, while having lunch in Huntington Indiana, Ashly overheard someone talking about horseback riding at Mackinaw Island, Michigan. She convinced Ed to turned around and fly to Mackinaw Island for a day of touring before returning home. Before the year was over we had flown to Cape Hateras, NC several times, been to various fly-ins throughout Virginia and neighboring states, and even to Vermont for a skiing weekend. Barbara) Ed’s wife, not a flying enthusiast, went for her first ride on December 27th to the Greenbrier Resort in West Virginia for lunch.

During the next 10 years, Ed and I, and often Ashly, traveled extensively over the eastern United States. We went as far north as Nova Scotia and as far south as Jamaica. On the Jamaica trip we crossed over Cuba and some long stretches of water. Ed wasn’t worried because he trusted me and I felt the same because of my confidence in his construction skills. Our travels never went further west than Dallas or Oshkosh. Hopefully, sometime during the next 1000 hours, we will make it out west or further. I’ve heard Ed talking to Skip Bowman, another Glasair builder, about going to Alaska in a formation flight of several Glasairs. Typically during the winter months we make a trip or two to Rutland or Stowe, Vermont where Ed skies. The rest of the year we fly to those $100 hamburger lunches, the EAA fly-ins, and visit out of town friends and frequent the beach at Cape Hateras, NC.

We also set two world speed records during those early years. Both were to First Flight (FFA), North Carolina on December 17th which is the Wright brothers’ first flight anniversary. One was from Richmond and the other from Covington Virginia. Ed had planned to start a chain of new speed records every year from a town of his name, but after Mr. Garber (Curator of the Washington Aviation & Space Center) died, the special low fee was discontinued. Our last speed record was only 220.34 mph, but I know I could do better now since my recent engine overhaul.

We have gone to the EAA fly-in in Oshkosh every year since my birth except for one. That is always the hi-lite of my summer because I get to see so many of my relatives and Ed usually buys me a present, or new option or two, and gets my GPS up dated. I also get to see the fine Stoddard Hamilton people and talk about old times.

One of my favorite passengers is Ed’s Weimaraner dog, Liesel. She goes with us to the beach and to many fly-ins where her obedience training and good looks make her real popular and take some of the attention off me. Often upon landing and before taxing to the ramp, Ed will place the David Clark headsets on Liesel and open the canopy on her side. This creates such a neat sight that people will run along side as we taxi in to photograph us. At the ramp Ed tells those who ask that Liesel is the navigator for low-level flights using her keen sense of smell. I, of course, know this isn’t true. At many of the fly-ins, we have been judged and awarded trophies for my construction and good looks. A few of these are as follows:

During the past 7 or 8 years, Ed hasn’t signed me up to be judged anymore because he says I’ve won my share of trophies and it’s only fair to let some of the others win. Nevertheless, sometimes the EAA chapters judge me anyway and we usually come up with another trophy, like the two earlier this year.

Looking back, I must say that I am very fortunate to have come from such a good heritage and been purchased and built by Ed Covington. Life here in Virginia, where the weather isn’t too extreme, or the mountains too high, is very good. We have the whole East Coast available to explore on weekends, and are less than an hour from the mountains or the ocean. I am a happy Glasair and tickled with my life in Virginia.