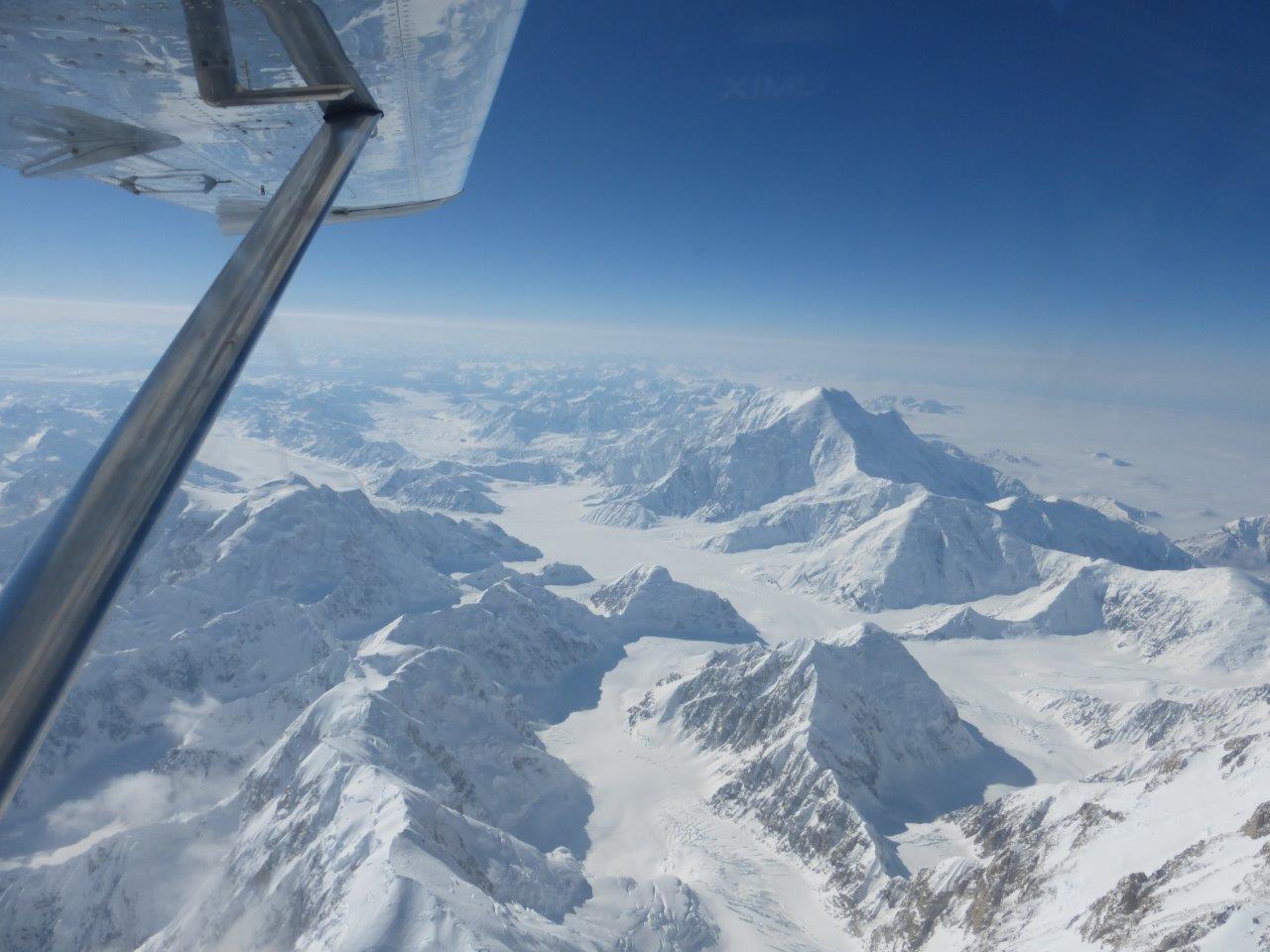 Friday was the day that all the stars aligned for aircraft, pilot, and weather.

My bird was still on small tires with wheel pants, had the new IO-390 with 10:1 pistons, cooling air intake ramps, and an over-sized oil cooler. Ambient temperatures were still cool, but winter winds had abated, and the forecast at 24,000’ was 15-18 kt.

So, I launched from Anchorage at about 1pm and started climbing. About an hour later, I flew over the top of Denali with a few thousand feet to spare. Interestingly, I was able to achieve that altitude with 2600 rpm.

It was glass smooth, and while not perfectly CAVU, there were only some low clouds on the north side. 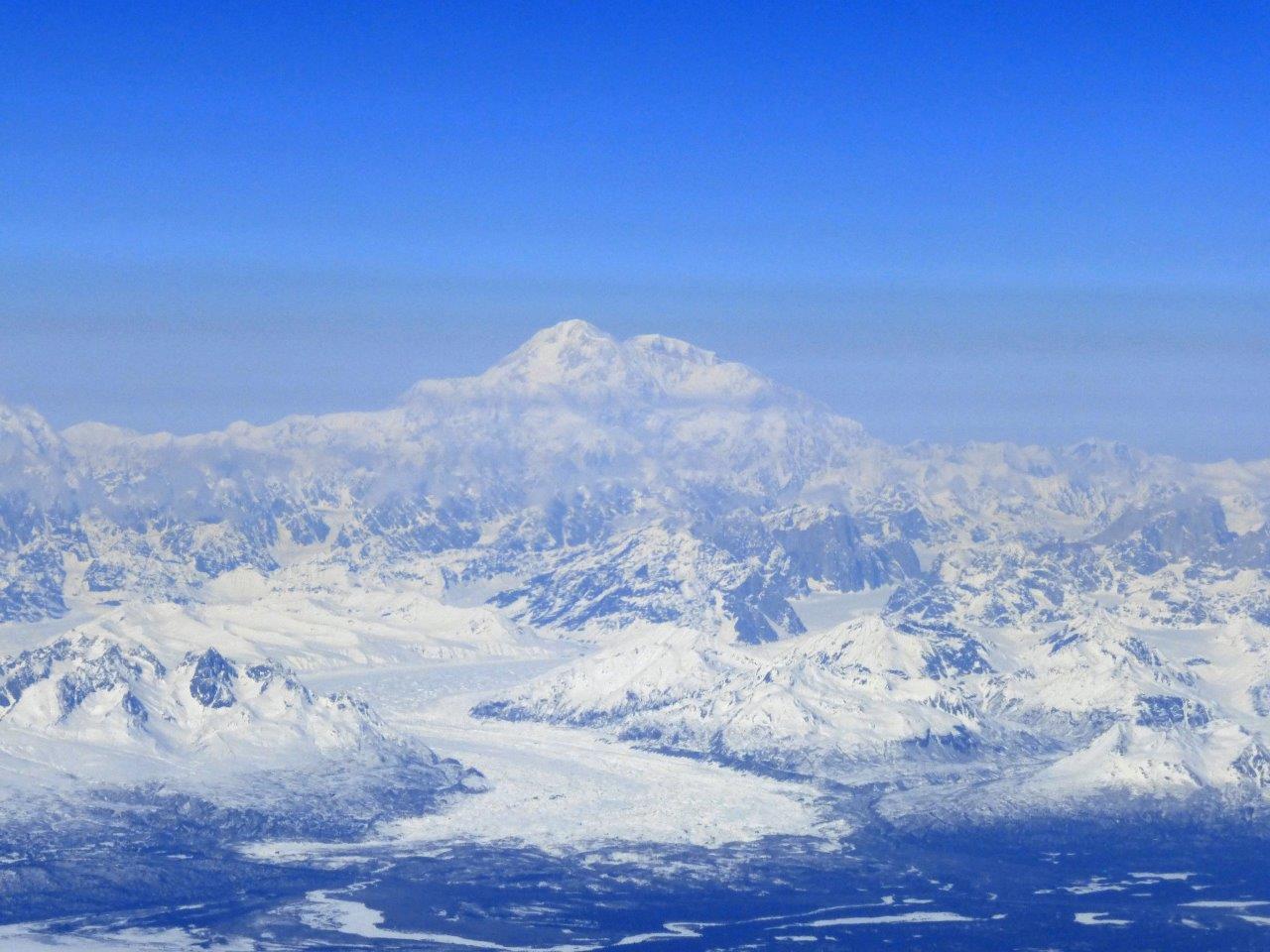 After topping the summit at right about 24k pressure altitude, I cranked it up to 2,700rpm, and kept climbing for a bit on the way back, managing to paddle my way to a density altitude of 24,700′ before running out of steam. I started with full fuel, plenty of survival gear, no passenger, and two bottles of oxygen. Cylinder head temperatures never got above the mid300s, and at maximum altitude, were actually below 300ºF. 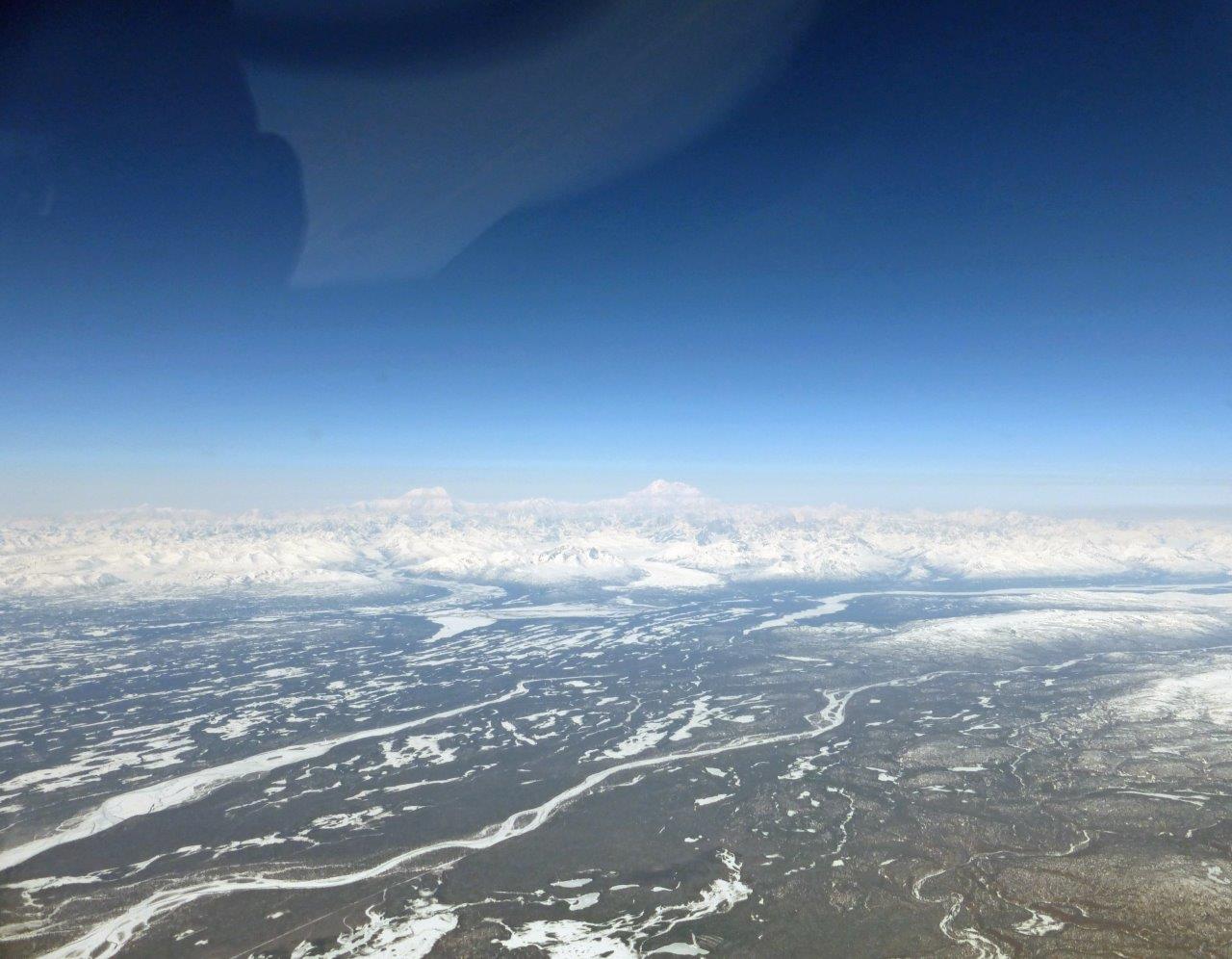 From past experience at FL 220, I’m sure I could have kept my oxygen saturation in the mid-90s with a cannula, but that usually requires cranking up the rate pretty high, and I didn’t want to end up having to change bottles at that altitude (while talking to ATC and hand flying on the backside). So, I dug out the full mask that came with my Aerox system. It definitely was more effective; I was able to stay at 98% saturation with rate to spare, and still landed with more than half a tank of oxygen.

It probably helps that I’ve got two heat muffs, and have up-sized the intakes, all the scat, and the firewall valves for both to 2″. I’ve also got SteinAir eyeball vents, which seal perfectly, and added the wing root seal kit from the factory. All those help a lot. I had both heat valves opened fully, and I was perfectly comfortable in just a fleece.

However, my climb testing seems to indicate that I’m only getting about 20 HP more than I did with the stock IO-390. 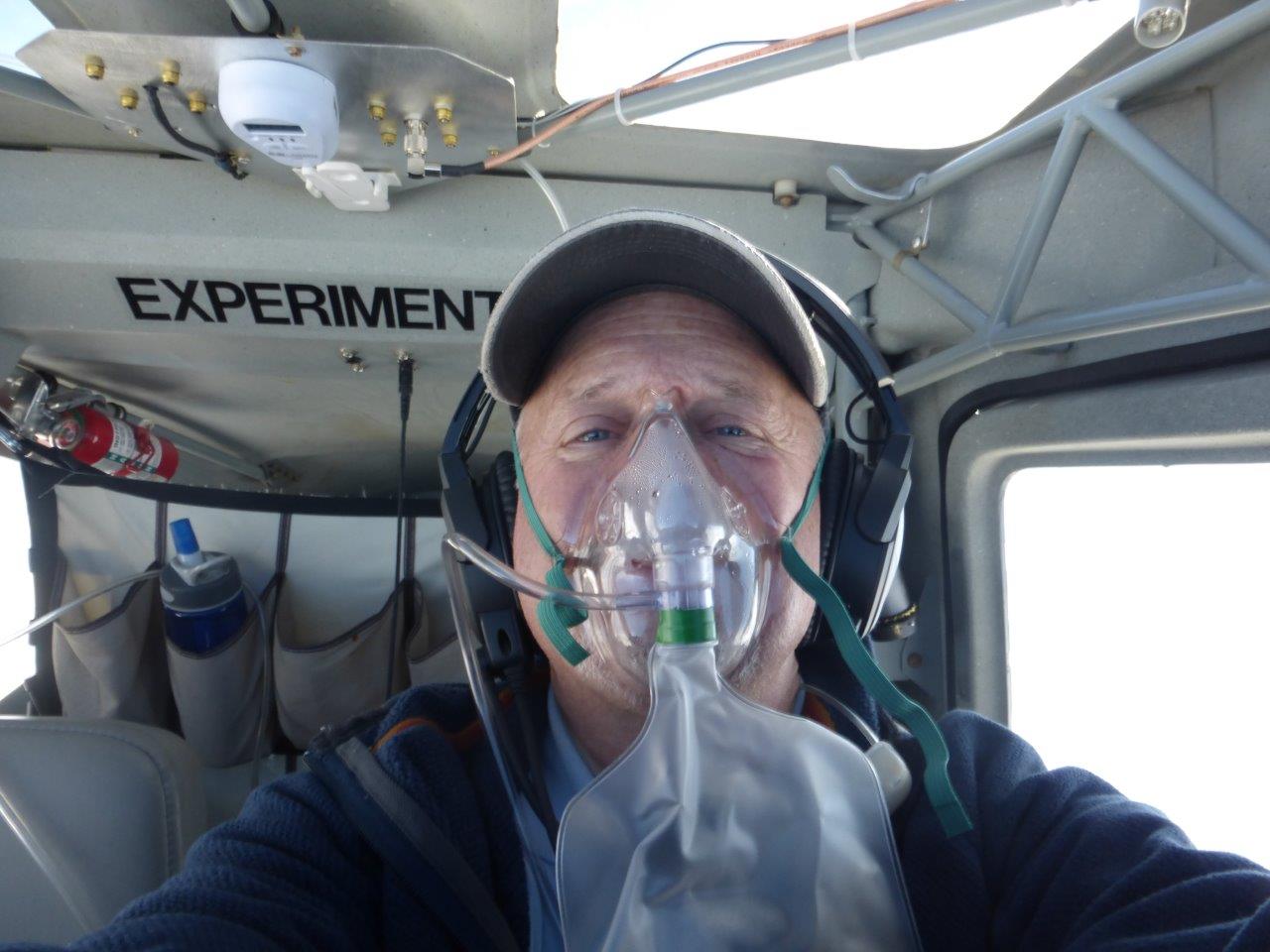 Perhaps the stock one was actually developing more than 210 HP, or perhaps I’m only getting 230 HP out of this one. I do notice that I’m actually losing about 2″ between MP with the engine off and MP at takeoff, instead of the 1.5″ that Lycon was losing. I thought maybe there was a low-pressure zone inside the cowling, where the air filter is, but I ran some tubing from that location into the cockpit, and measured the pressure (referenced to static) with a manometer at a wide variety of flight conditions. The good news is that location runs pretty near full dynamic (pitot) pressure—at least with the intake ramps, which I’m convinced make a big difference. I also tried one flight without the air filter, but it made no difference at all. 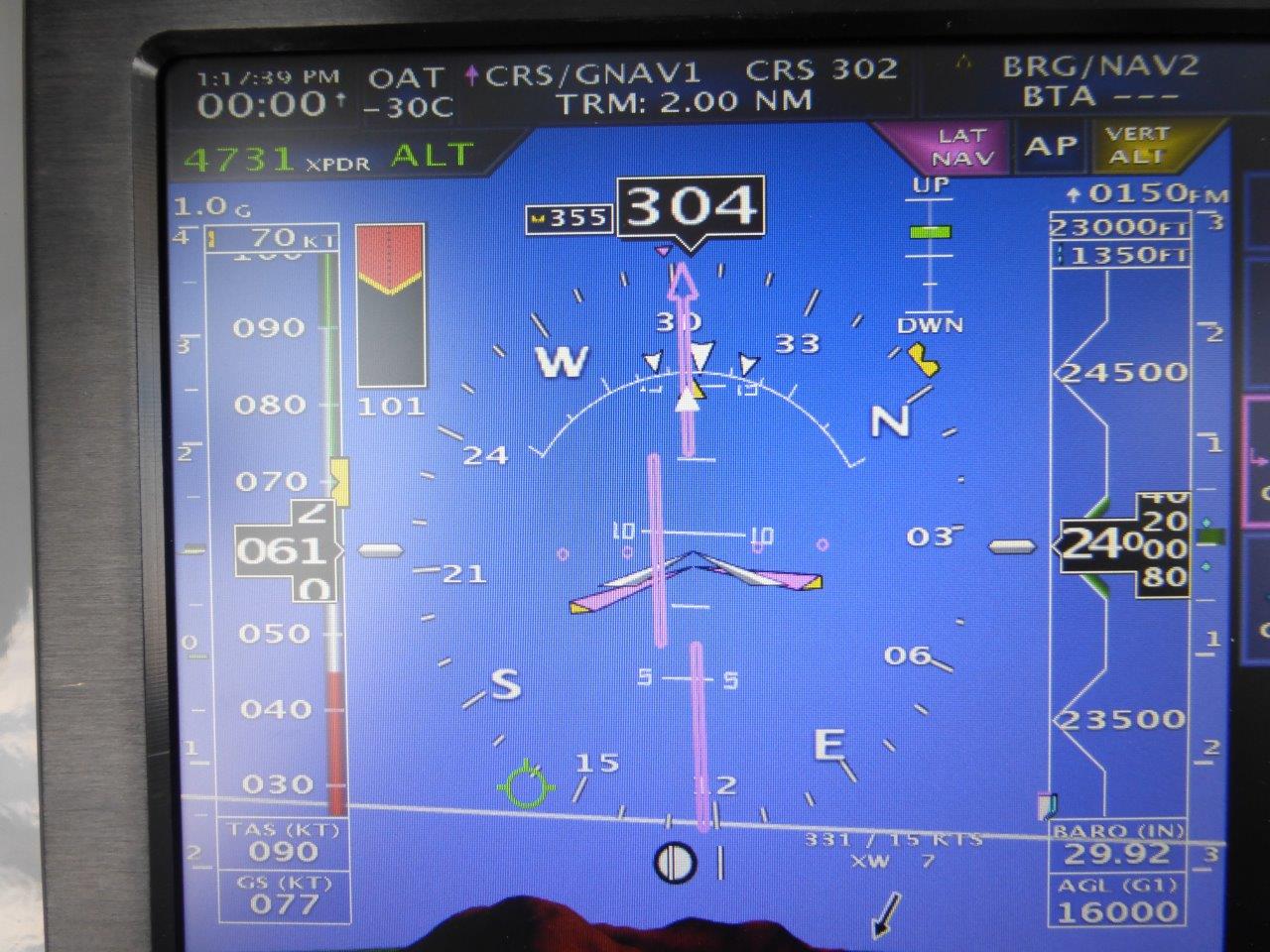 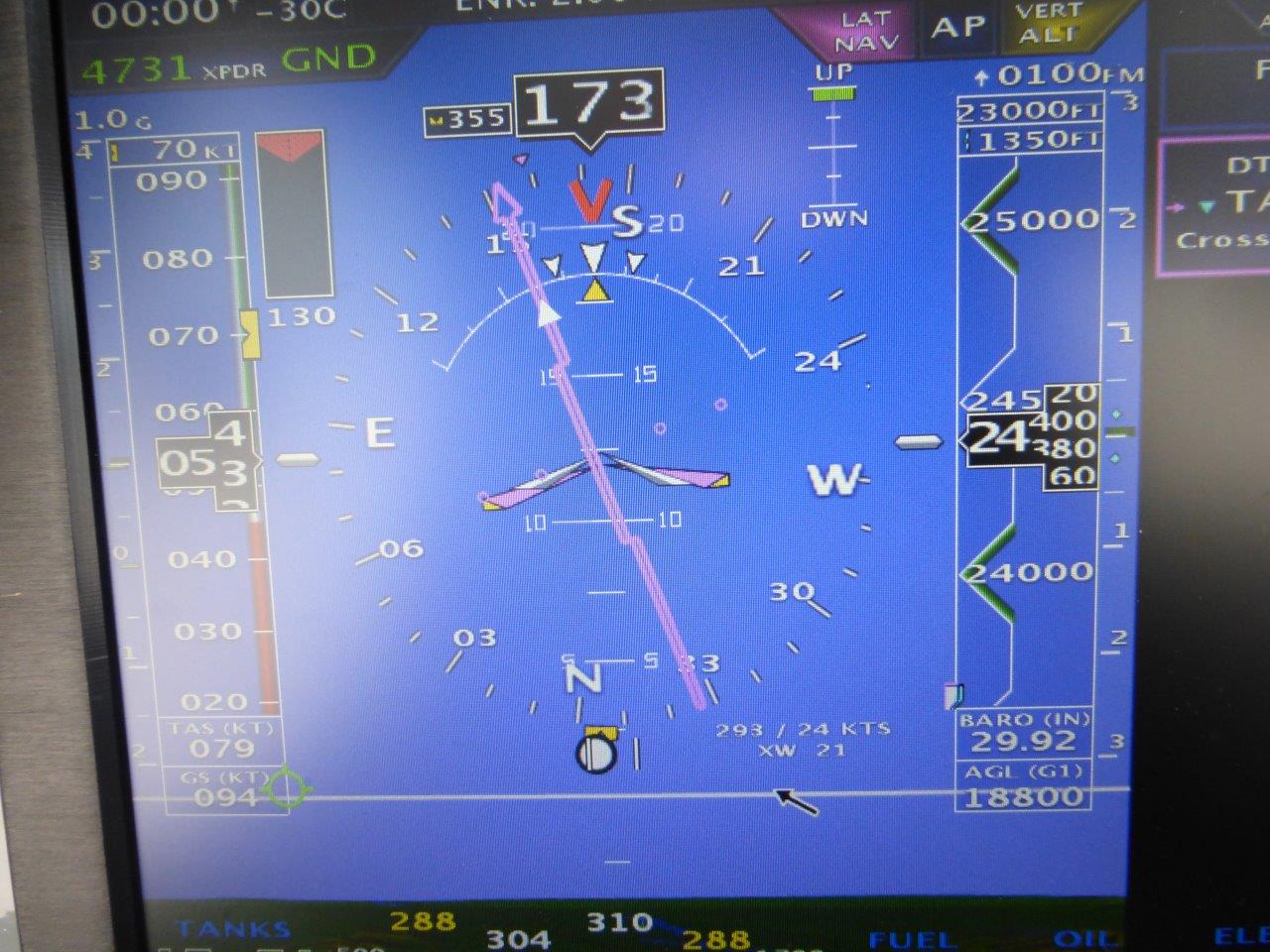 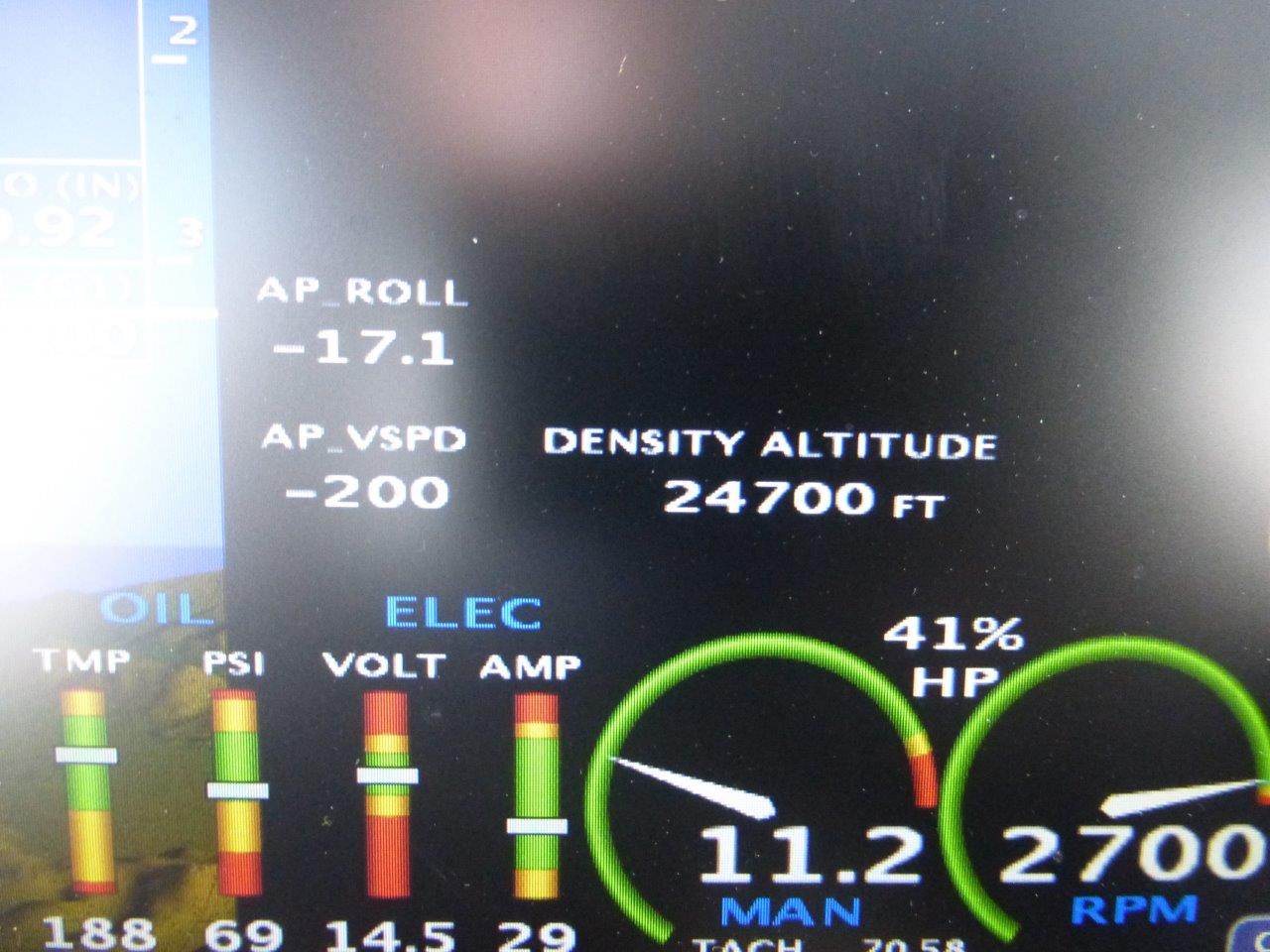 I’m guessing that the missing 0.5″ of MP is due to turbulence within the induction system, caused by the air having to turn a corner to get into the servo—compared to what is presumably a nice straight shot in the dyno. However, 0.5″ doesn’t explain the apparently missing 20 HP. I confess to being a little stumped, and would love to hear anyone’s ideas. Maybe if I can get the full 252 HP I can get high enough to see Russia! 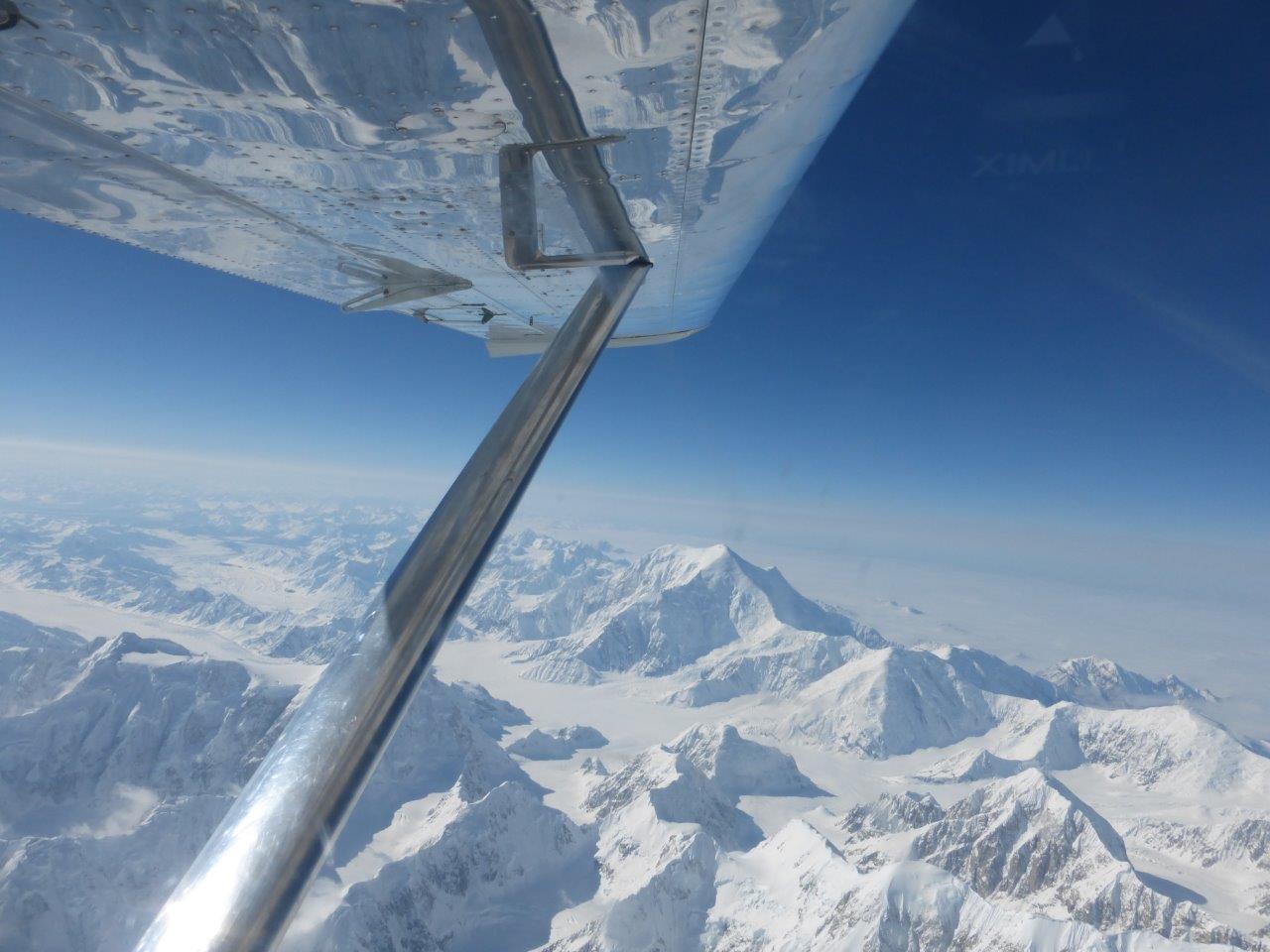 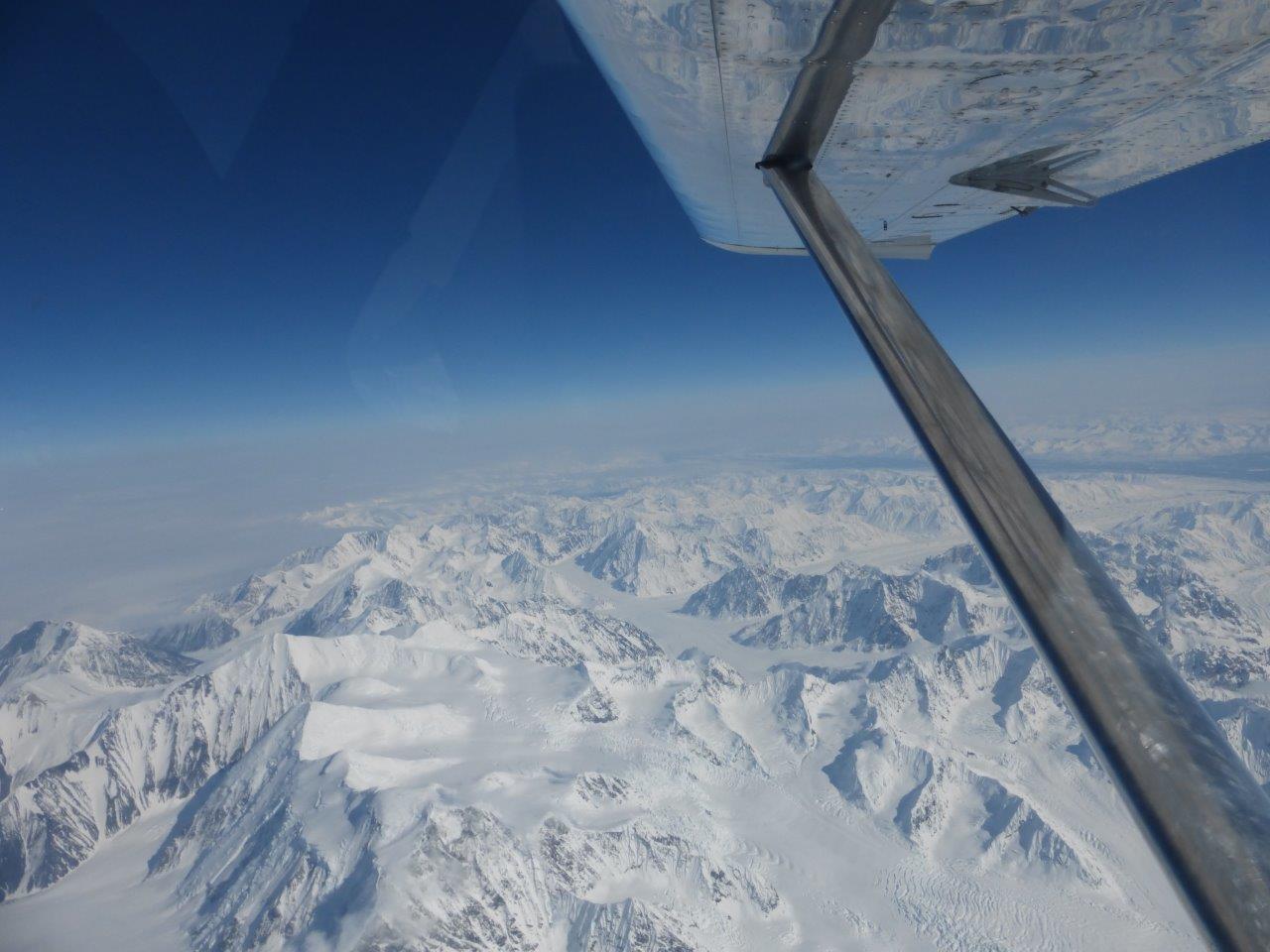 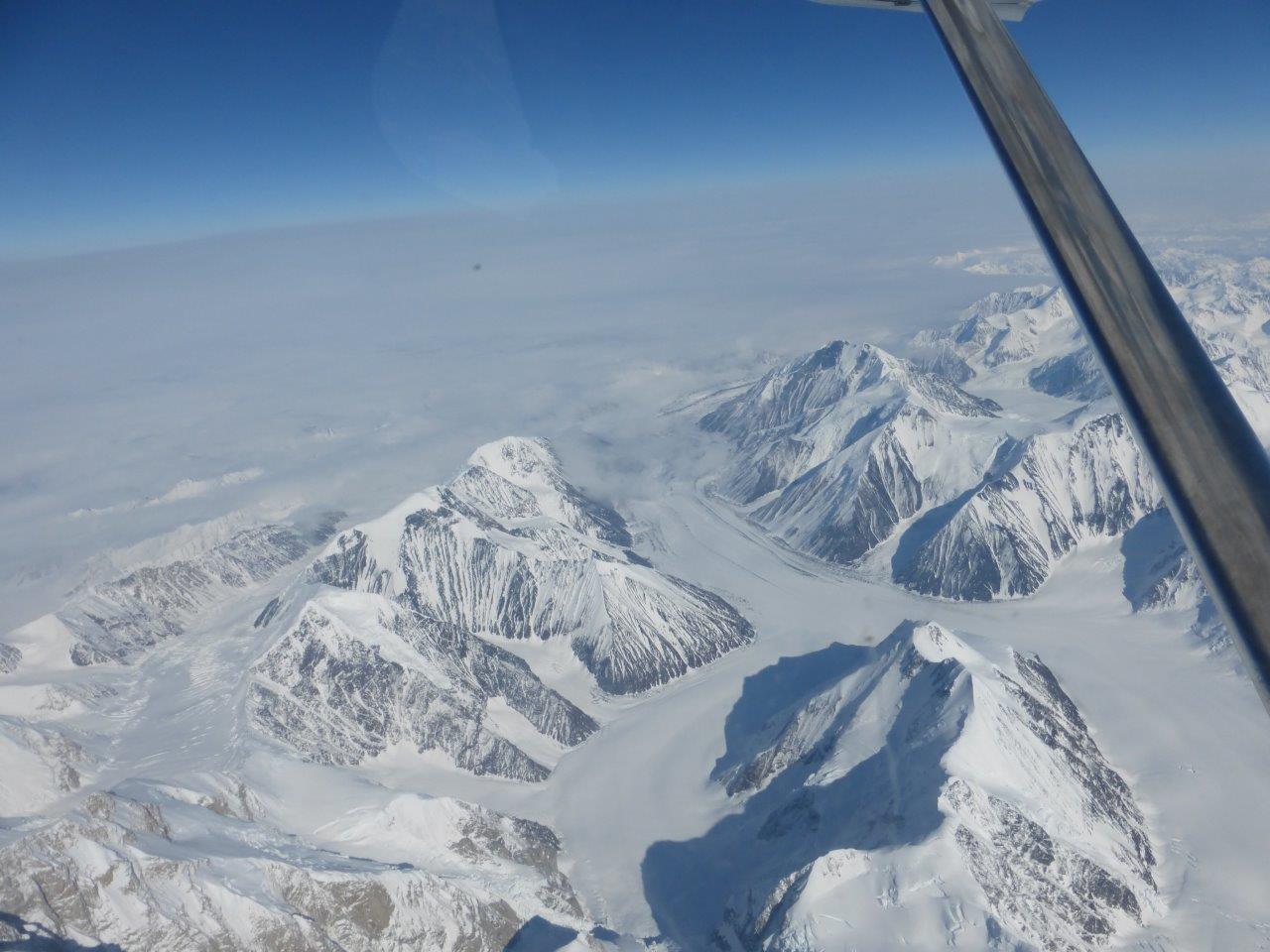