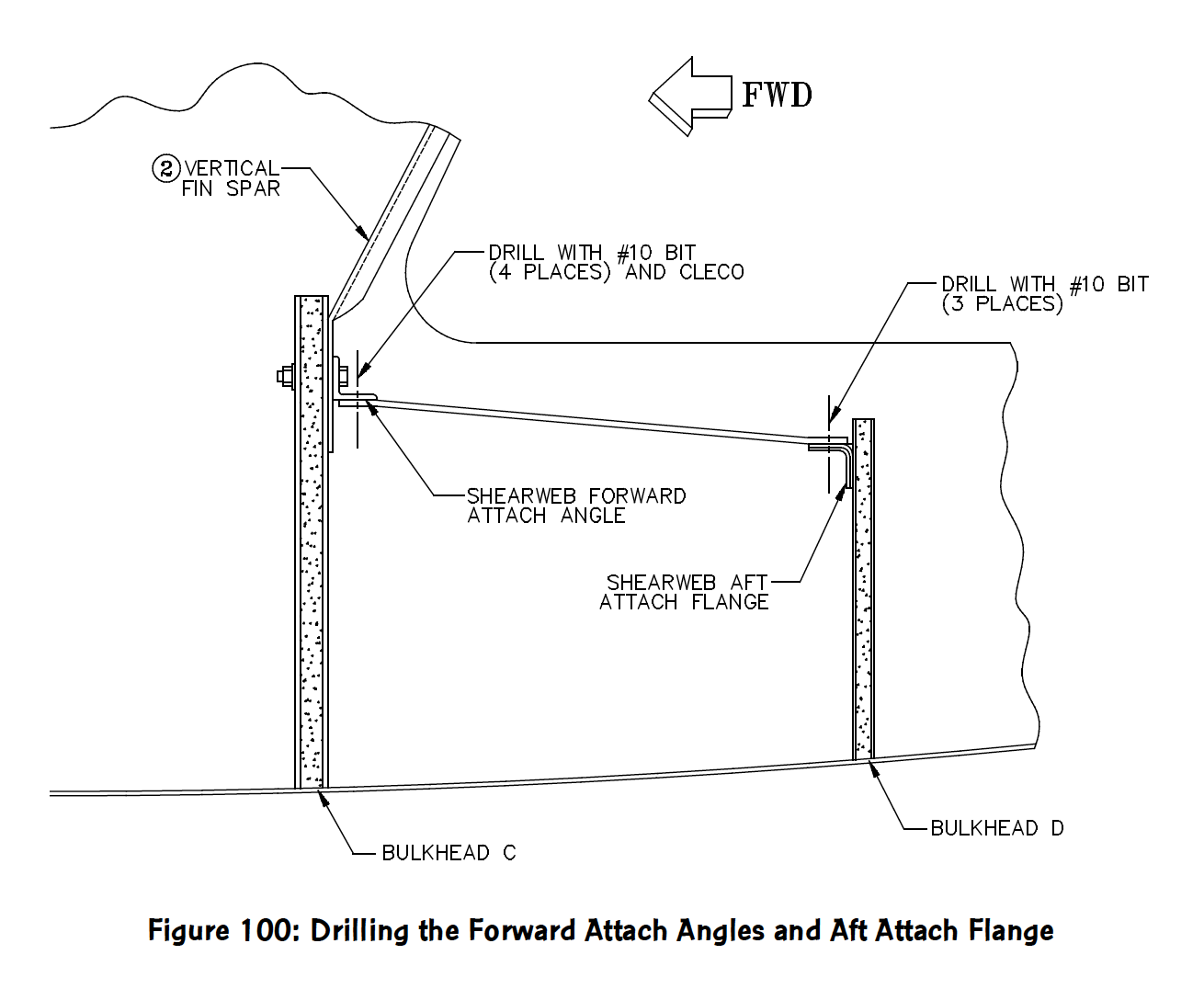 C/C inter-bulkhead shearweb: If you follow the manual when doing the C/D inter-bulkhead shearweb, you won’t have any picnic when placing the DBM side flanges. Instead, make a sandwich. Use a piece of scrap about 10″x1″ for the bottom slice of bread, the DBM for the meat and the shearweb for the top slice. Drill the 2 aft holes on each side thru the scrap, using the shearweb as a template. Butter the bread, smear mayo on the meat and slip it in halfway lengthwise, leaving about 1-1/2″ hanging out. Toothpick (cleco) the bread thru the 2 holes on each side and fold the meat down so the sandwich will fit into the fuselage. Don’t forget to put resin on the fuselage, put the sandwich in and stipple the DBM to the fuselage thru the inspection hole you cut on the bottom. When cured you can remove the clecos and save the scrap. And now you know where the other missing sandwich is D/E inter-bulkhead shearweb!

Bulkhead C & D shearweb: For the shear web between bulkhead C and D: I would strongly recommend that you put nut plates on the attach DBM tape (as in the shearweb between D and E), including on the small angle brackets on the aft side of bulkhead C. ( I just spent 10 man-hours mounting that shear web – next to impossible because you are working over the elevator pushrod, over the rudder and elevator horns, etc. trying to put on nuts) Also on the same brackets (.063 aluminum angle on aft of bulkhead C) Do not put the holes for the bolts in line with each other. Offset them, (make the bracket longer if necessary to accommodate that) Otherwise the bolts attaching it to the bulkhead interfere with putting in the bolts for the shearweb.

Shearweb between bulkhead C & D: When you install the fiberglass support for this shearweb, after drilling holes for the bolts, install nutplates all around. I did not initially, and it took two of us 5 hours to install it the first time. It is very difficult to get up there and work through the inspection hole and around the elevator horn and pushrod to install nuts on bolts. I recently had to remove it (which took two of us 2 hours!) Solution? Install nutplates in that fiberglass support. For the fwd attach points put the 4 nut plates in the shear web itself, as it fits under the two brackets on Bulkhead C. The fwd 3 holes on each side are under the curvature of the fuselage sides and you cannot rivet on a regular nut plate there, either by squeezing or driving. I installed floating nut plates there using hardware store epoxy and using an AN3 short bolt through the hole to hold it in place while the epoxy set up. This way one person can install the shear web from the top by simply screwing in the bolts in just a few minutes.

Shearweb inspection hole:The “inspection hole” is misleadingly named, as its main purpose is not to provide access for inspection but rather for laying up the side attach flanges for the shearweb and for installing the nuts on the shearweb attach bolts. There’s nothing wrong with using nutplates here instead, but we couldn’t figure out (as someone on the net mentioned) any easy way to rivet nutplates for the forwardmost pair of holes on each side. If you figure out a way to do that and if you prefer to use a laminating former with a hole in the middle (like the one we describe for the aft shearweb) then feel free to eliminate the inspection hole.

For annual inspections and the like, we recommend removing both the forward and aft shearwebs. (See the Handling, Service & Maintenance section of your Owner’s Manual, which.) You will be able to do a much more thorough inspection of the rudder control yoke hardware and the elevator bellcrank from above with the shearweb removed than from below through the hole.

As for fitting the shearweb, I’m frankly not sure why this has been such a big issue for some of you. On the several GlaStars I know about personally, this simply has not been a problem. However, one possible source of difficulty may arise if you have neglected a couple points made in the ANOR of 2/18/98 (see Page 5). This called for increasing the width of the forward shearweb aft attach flange to 1-1/2″ from 1″ and for decreasing the length of the shearweb by a corresponding amount. This is necessary to allow the shearweb to be installed and removed with the stabilizer attach bracket in place.

Installing the forward shearweb: In keeping with my goal of not drilling a large hole in the bottom of the aft fuselage, I have a suggestion for Laminating the side attach flanges for the Forward Shearweb. Ref. Step 73 p. 137: Instead of using the entire underside of the shearweb, make a duplicate panel (I used some .032) and cut it in half or even in thirds and use the outside pieces to support the laminating of the DBM flange. This way you can get underneath the (simulated) shearweb from the top . After it cures, remove the alum. piece and cut/trim it to about an inch wide. Drill the attach holes thru the flange and .032 backup plate and use this plate to attach some nut plates. Attach the nut plate assembly to the web with some resin, structural adhesive, T-88 or whatever you like to keep it in place. This .032 strip with nut plates (method) can be applied to other locations as well.

Installing nutplates on the shearweb: Let’s see if I can explain what I did.

Believe that will do it. Boy, do I have a respect for Craig and the manual writers. I am sure he/they could “clean” this up and really make it simple to understand.

Installing nutplates on the shearweb clarification: The fiberglass side angles are installed in a similar manner as the ones for the aft shear bulkhead plate (D to E). Hot glue did a fine holding job. Mold release was used on the plate. This “working plate” also established the bolt hole pattern . All holes on each side were located and drilled through the plate and the .032 by 1-inch wide strip. The strip became a “transfer strip” or hole duplicator strip to locate the forward two holes. (Using the aft two holes to index the strip for drilling the forward holes). These (forward two holes) were drilled from the bottom side of the formed angles. Then the strip became the nutplate holder and attached (use a good epoxy to bond it) to the underside of the formed flange(s). The real plate was formed and the “plate” pattern again located the holes.

This method may seem a bit pain full but will not compromise the structure in this key area with a hole. The shear plate is easy to remove for a proper inspection. Seven of the 15 bolts can be removed with a power driver. Hope this helps.