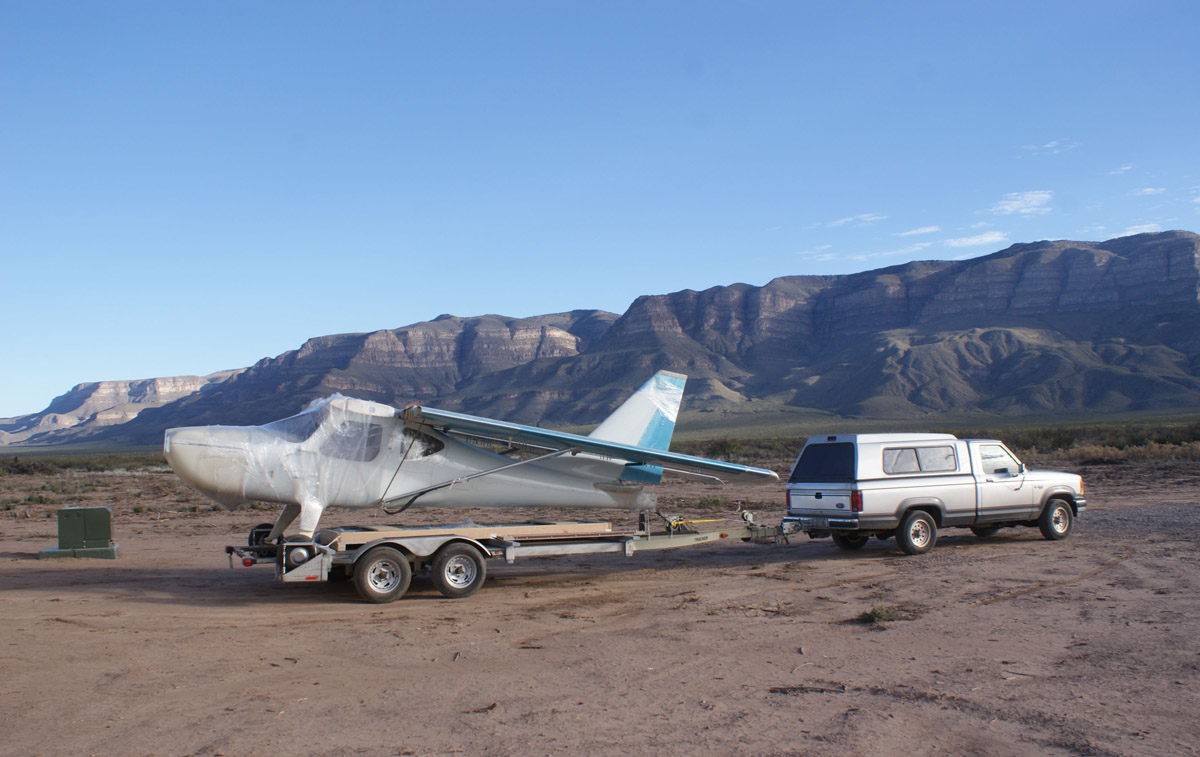 I am in the process of relocating to New Mexico from Arizona and since my project is on its landing gear, moving the airframe presented a problem. My plans are to use a modified boat trailer as suggested by Chris Wills to transport the airframe.

The biggest issue that led me down the path I took was the gear width on my tail dragger was 8 feet. I believe 8’6” is the widest allowable trailer width even though the load can be wider. Most flat bed trailers have a narrow deck because of the wheel wells unless it is an over deck flat bed on which the load sits quite high.

Width limitations on closed vans leaves very little clearance, if any, and aircraft transporters seem to be few and far between in the Southwest. The archives kicked around some trailer ideas, but it was Chris Wills who spoke of using a jet ski trailer I believe, and suggested the use of platforms behind the trailer axle. The basic concept was borrowed. Finding a suitable boat trailer was another adventure. I located a dealer in Missouri who had an older trailer that had never been sold that he let go for a very reasonable price. The price was low enough that I contracted a transporter through uship.com who delivered it to Arizona in 26 hours. The transport was about twice what it would have cost me for the trip, but the wear and tear and finding someone to tend to my horses and donkeys made it worthwhile.

The bearings and brakes were serviced before the trailer was released. Since the trailer was never used, the only water it has experienced would have been rain drops. The brakes are hydraulic. In the Southwest, folks are urged to run their tires at max pressure to minimize heat damage.

I put my head together with a good welder/fabricator who was able to take my modifications, select the needed materials and create a multi-use trailer. With the center rail it is a Glastar hauler. With the deck, stake pockets and retainer boards it becomes a utility trailer. The telescoping tail member carrying the tail lights extends 4 feet so when the Glastar is loaded the extended trailer length avoids an over size load.

Using the winch that came with the trailer I found I need only two ramps to load the Glastar as the tail wheel loads before the main wheels meet the ramps.

The main wheels are secured to their platforms using fabricated fixtures connected with clips, eyebolts and turnbuckles. The tail wheel is held against the stop from the pressure of the lifting straps and kept from vertical movement by using ratcheting straps passing over and under clevis pins carried by the rail and the tail wheel stop. To ensure the strap does not slip from the circumference of the tail wheel I fabricated a removable cloth and resin retainer with flanges that engage the tire and another set of flanges between which the ratchet straps are retained.

The parts consist of a base to be pinned to the tail wheel track and two telescoping tubes with a spring engaging channel at the top end of the inner tube. When the springs are weight relieved using a small jack, the tubes will telescope and be pinned together.

I put together a box for the trailer to haul the tail feathers of the Glastar. I purchased a roll of foam for use under carpets which I cut to line the box and act as cushions beneath the cross pieces on top of the box. The loading ramps, reinforced with steel angles as they were sagging out a bit, are bolted to the forward cross pieces on the trailer.