By Michael Crowell, reprinted with permission from INFLIGHT Magazine

Mike is a CFII, Advanced and Instrument Ground Instructor, an FAA Safety Counselor, and a check pilot for the Washington Wing of Civil Air Patrol. He has over 3000 hours of flight time, including over 2100 hours of instruction given.

As a flight instructor, I have always loved trying out different aircraft, and in the process of giving instruction, having an opportunity for me to learn and grow! It is my firm belief that the wise pilot is one who remains forever a student of flight! So, when Bill Janes, owner of GlaStar N324BJ, asked if I would teach his friend Mike Parker in his plane, I readily agreed.

I have had the opportunity to fly GlaStars on several occasions, mostly with Tim Johnson, who has more hours in them than any pilot in the world, about 2,000 hours! Tim was the demo pilot and sales rep for Stoddard Hamilton before he retired. He is now the chief pilot of the GlaStar Assocation International (GAI) users group, which is helping to fill the void left by the closure of Stoddard Hamilton. The airplanes are currently “orphans”, however hopes are high that the company will be up and running again in the future. And, as is the case with most home-built/kit aircraft, much of the hardware needed to keep them up and running is standard stuff available from other sources. 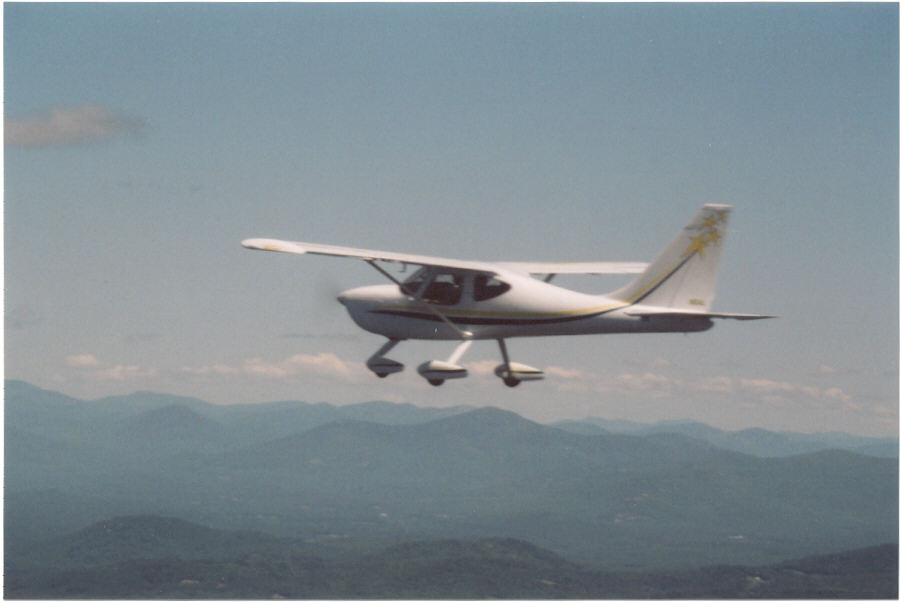 Every kit plane is unique, and N324BJ is a very unique GlaStar. Powered by an O-360 Lycoming, it has the German-made MT 3-blade full-reversing prop. With the optional wing tanks, the fuel capacity is about 50 gallons (30 in the mains, 10 each in the tip tanks), and this aircraft is equipped with an electric boost pump in addition to the transfer pumps to bring the fuel in to the mains from the tip tanks. Cruise speeds in N324BJ range from 130 to 140 knots, depending upon power settings. With integrated electronic engine instruments, and a moving map GPS/Comm and transponder, coupled with a very well appointed interior, the aircraft is equipped for comfortable cross country flying.

ANR headsets also do their part for comfortable long-range flying! Quality of workmanship is critical in homebuilts, and N324BJ exhibits a high level of quality throughout. As an instructor, I’ve turned down requests to fly in some homebuilts, and I believe that having some knowledge of the building and history of an experimental is a critical safety issue for instructors. I’m not willing to jump into a strange airplane without some sense of the builder’s commitment to excellence! Tim Johnson’s advice is to always ask the builder, “so, what have you done differently in this airplane?”, seeking to discover if potentially troublesome departures from plans have occurred in the building process.

Preflight of the GlaStar is fairly conventional, but again, is unique to the airplane. For example, fuel drains may or may not be as per the kit design, reflecting the builder’s preferences. And, this was designed as a folding-wing airplane, so a quick check that the spar pins are in place is advisable! As a believer in checklists, one of the first projects undertaken in the instructional process was to evaluate the first couple of hours of flight, make notes of individualities of the airplane, and then to produce a checklist that represented all of the factory notes plus the “extras”required by N324BJ.

A generic GlaStar checklist as found in the factory manual does not, for example, have reference to the checklist items required for a main boost pump or the needs of a reversible prop! Another issue to look at is weight and balance, as optional equipment or building processes can substantially alter these figures. N324BJ, with the extra weight and forward moment of the reversible prop, required weight in the aft fuselage, in order to compensate for a nose-down tendency. These types of changes, of course, alter the useful load and total weights for a given aircraft.

Ground handling is easily learned in the GlaStar, with its castering nosewheel. A bit of power at the right time, and learning to anticipate need of rudder makes it possible to taxi and maneuver with little brake usage, and with brakes, extremely tight turns can be made, as the nosewheel moves close to 90 degrees. With the reversible prop, it is even possible to back the aircraft up, though very careful consideration should be made of that with the possibility of sucking up unseen debris into the prop, and the absence of rear-view mirrors… not to mention the consternation you may cause to the pilot following you on the taxiway! Imagine trying to explain to your insurance company how you “backed into” something in your airplane!

Takeoff is conventional in the GlaStar, though with the 180hp Lycoming, acceleration is brisk, and the plane is ready to come off the ground very quickly. A normal takeoff typically uses one notch of flaps, a short-field effort with full flaps and a 50-knot climbout. Instructors, keep the student’s eyes outside the cockpit, so they correct for that ole “swing to the left tendency” with the rapid acceleration! Stick forces are light, so expect the new GlaStar pilot to over-control a bit at first. Normally, at about 40 knots, the plane feels ready to fly, and slight back pressure to bring the nose off the ground results in a smooth lift-off as the plane continues to accelerate. By the book, 65 knots is the best angle of climb speed (assuming 1 notch of flaps), but with the 180 horse version, a full-flap, 50 knot climb will rocket you over obstacles in short order! Obviously, the trade off is in a very high nose attitude, which could prove problematic if you lost power during the initial climb. Best rate of climb at sea level is 78 knots, a normal climb of 80-90 knots will provide a very impressive climb for normal use. A relatively low flap operating speed of 75 knots means you want to make sure any flaps used in take-off are retracted fairly quickly.

At altitude, cruise settings are what you want them to be, scooting along at the 130-140 knot range, or getting slowed down to a 50 knot, 1 notch of flaps, hands off sightseeing tour. The strut is aft of the main door, so visibility down is superb in the GlaStar… it would make an outstanding aerial photography platform, with the combination of solid low speed handling and strut configuration!

Stalls are conventional, with more of a mush than anything, unless you get fairly aggressive nose-high attitudes. If the GlaStar is stalled in an uncoordinated attitude, it is quite forgiving, tending to wing-over into a spiral and quickly “unstalling” with its clean lines, with any nose down attitude. Tim Johnson and I had, in the course of spin training for his CFI rating, managed to get the factory GlaStar to spin (numerous times), though it really does a great job of avoiding them! If a spin is entered, full opposite rudder, neutral aileron (important!), and release of back pressure results in a normal recovery. With the reality that every GlaStar is different, especially in where the CG lies and other aerodynamic factors, bear in mind that any spins are truly putting you into the role of test pilot! The clean lines of the aircraft mean a rapid buildup of speed in the recovery, so prompt retraction of flaps (better that they weren’t out at all) is imperative, to avoid overstressing them with their 75 knot limit. This is also something to watch in normal stall awareness training!

Back to the airport, and the airplane tries hard to make you look good on the all-important landing. A normal approach at 60-65 knots, a gentle flare, and you are down.

Full-flap landings help shorten the landing roll, but initially you might consider training the student with just one notch of flaps for landing, to make for an easier to judge flare. Lowtime GlaStar pilots often do get into some trouble when they get below the 60-knot range on approach, as the plane will develop a significant sink-rate at the lower speeds, resulting in a hard landing unless power is carefully and accurately applied. The 180hp version tends to be somewhat more nose-heavy than those with smaller and lighter powerplants, feeling much like a Cessna Cardinal with the 180hp engine.

Good airspeed control and a bit of practice make the landings simple in the GlaStar. The full-reversing feature of the MT prop could conceivably be used in helping to shorten the landing roll, but with the extra motions and cockpit manipulations needed to flip the reversing switch, is not advisable at that critical point of the flight. At any rate, landing rolls are short and sweet anyway, when done with proper airspeed and power control!

So, instructors, what should you watch for if asked to teach someone in their GlaStar? I might say that I would not shrink back from the opportunity, but a few things to watch for, in summary:

In conclusion, go have fun in a GlaStar! They are stable, forgiving, and by avoiding being complacent in a few areas, an extremely safe aircraft. They carry a great load, they go pretty fast, they take off from small/rough fields with ease, and are not a difficult aircraft to fly. Given half a chance, the airplane will make you look good! Want to buy a GlaStar? Bill might be talked into selling his, and with the great design of this aircraft, I firmly believe that the support needed will appear, either through a rejuvenated factory, or another source. This airplane is just too good to remain an orphan for long!