Home GlaStar & Sportsman Differences in the Sportsman vs. GlaStar

Two of our primary goals in the development of the Sportsman were to make it much easier to build and structurally stronger (so it could handle the planned significant increase in gross weight to allow much greater utility). Contrary to what some have said, even though the two airplanes look very similar, there are a multitude of differences between the two aircraft which were necessary to achieve these goals. Many structural changes were required for the Sportsman to achieve the desired increase in utility and gross weight. Below, is a partial list of changes and improvements incorporated in the Sportsman for you and others to consider, and hopefully spread around to those who may not know.

1. Joggled Fuselage Halves. We have incorporated joggle joints on the Sportsman to eliminate builders having to struggle with masking tape to join the fuselage halves. As a result of this change, the fuselage halves are now quickly and easily bonded together with a structural adhesive, rather than laminated with DBM strips. The fuselage goes together very easily with Clecos in only a few hours time.

2. Right Vertical Fin Half. This is now a separate part and joined with joggle joints as well, allowing for ease of installing bulkheads. (No more crawling inside the tail cone to laminate!) 3. Optional Pre-made Flanged, Drop-in Bulkheads. With this option, bulkheads are now simply placed into position and installed with structural adhesive, rather than fabricated from templates, foam and cloth, and then fit, trimmed, and laminated in place. These advanced bulkheads save many, many hours of work!

4. Greatly Improved Safety Cage Jigging/Tooling. We spent a lot of time, effort and money to improve the jigs, fixtures and tools used for the Sportsman safety cage. As a result, we have a more accurate and repeatable fit of the Sportsman cage, allowing us to significantly tighten up our tolerances. For example, currently, on the Sportsman our QC tolerances are within 1/10 of 1 degree on the gear truss level and wing angle of incidence. Thus, much less customer time is spent “aligning” the cage with the fuselage halves. No more issues with heavy left wings or gear trusses not being level.

5. Reduced # of Cage Attachment Tabs. We reduced the number of single (tab) cage attachment points in half, by optimizing the positions of those necessary to keep. Again, a more accurate fit resulting in less time for the builder to install the safety cage in the fuselage halves.

6. Accurate Location of Lift Strut Cutouts. With the tighter cage tolerances, we improved the lift strut area on the fuselage so that it now requires a simple, round 1 3/8″ hole cut in the fuselage, rather than the “star” shaped cut out to clear the support tubes. Again, easier to assemble, easier to seal.

8. Expanded Wing Root Area. This area of the fuselage was increased in height to better fit the wing roots. No more crunching fiberglass with the spars when folding the wings.

9. Revised Top-Deck. The Sportsman top-deck is all new, resulting in a better fit/finish. Also, the fuselage wing roots now have flanges built in, so the top deck is easily and quickly installed with –you guessed it–structural adhesive. No more frustration trying to get those laminates in place to bond on the top deck. A joggle joint was added at the leading edge too. So, all of this is now fast and easy to install and paint when done!

10. Re-Tooled Door Molds. This results in a better fit to the fuselage contour. Also, we have now added carbon fiber to the upper section of the doors for added stiffness. New foam templates also result in a better fit of the door to the door opening.

11. Rudder Pedal/Master Cylinder Attach Points. These are now welded tabs on the Sportsman cage. No more laminating to reinforce the composite floor or drilling and attaching brackets.

Just bolt all assemblies in place and go! (By the way, this change took all flexing out of the brake system, giving a noticeable improvement to braking leverage. Note: Sportsman rudder pedals have been re-positioned to offer more room between the pedals.)

14. Pre-Finished Interior. Fuselage halves and top decks come standard with a gray Zolatone finish. For the majority of customers who wish not to spend a lifetime and a fortune on interior finish, or add unnecessary weight to their aircraft, this is a big benefit.

16. All New Nose Gear Assembly. The nose gear assembly is completely re-designed and incorporates a rubber, shock-truss design as used very successfully on the Glasair FT for 20+ years now. This design is stiffer, stronger, and easy to install. (We routinely change our prototype from a tail-dragger to a trike in a little over 1 hour!!)

17. New Fuselage. The tail section of the Sportsman is noticeably stockier, one foot longer, and the tail has been moved up three inches. These design changes made for a significant improvement in the longitudinal stability. (Note: This issue was noted by the CAFE foundation when they reported on the original GlaStar.)

18. New Flap Design. The Sportsman flaps are 18% larger, deeper in section, and ride on a new track design. These flaps are much easier to build since there is more room inside to maneuver with a bucking bar. Also, the flaps are VERY easy to operate as compared to the GlaStar and have a 90 kt deployment speed. (Heavy flaps and low deployment speed have been a common complaint with the GlaStar design.)

19. 50 Gallons Standard Fuel Capacity. The auxiliary fuel tanks are standard on the Sportsman.

20. Aileron Servo-Tabs. Aileron servo tabs are standard on the Sportsman.

23. All New Wheel Pant Design. The Sportsman wheel pants are split fore/aft with joggle joints making them much easier to install. Brackets are pre-formed and all wheel pant holes and trim lines are marked for quick trimming and easy installation.

24. All New Cowling. The Sportsman cowling has been re-tooled for better cooling efficiency. It is designed to easily fit both 180 or 200 h.p. Lycoming engines. More significantly, it can be shortened approximately 2″to fit the Hartzell compact hub props, saving approximately $1,500 over the extended hub props!

25. Enlarged Cabin Area. The cabin area is 1″ taller to provide extra head-room and provide clearance for the larger flaps when wings fold.

26. New Optional Instrument Panel. Our new “contoured panel” was designed with shallower top corners, providing better over-the-panel visibility. Three main sections make up the center of the panel, all of which are oriented square to both the pilot and co-pilot, providing good visibility for both. We relocated the forward horizontal tube on the safety cage to allow us to reposition the instrument panel. Two smaller side panels, for switches, circuit breakers and small instruments, are canted to “frame” the panel in a very attractive three-dimensional, modern look. Significantly, the throttle, prop and mixture controls are mounted to the lower, center portion of the panel, eliminating the need for a center console. All of this combines to provide the pilot with not just a very nice panel layout, but more ergonomically positioned controls and more stick clearance of the panel and controls.

28. New, Large Rear Passenger/Baggage Door. The production rear door is VERY large – large enough to insert even the bulkiest of luggage and full sized bicycles! Note: The prototype door is much smaller than that provided on the production aircraft.

29. Rear Jump Seat Option. This option will allow comfortable seating for those up to about 5’5″ tall. A 6′ 200 lb. adult (like me) will be willing to endure the limiting headroom as long as the duration isn’t too long and the destination worth the sacrifice.

30. Many Internal Wing Changes. There are many changes internally in the wing. For example, the ribs and stringers have replaced hat sections in all but the fuel bays; wing skins are thicker; spar doublers beefier, wing root ribs stronger; the spar-root design was improved; the rear spar uses a larger attach bolt, etc., etc. (Contrary to some of the posts on this forum, it is these changes, along with the changes made to the safety cage, fuselage structure, landing gear, etc., that allow the gross weight increase in the Sportsman as compared to the GlaStar.)

32. Changes to Safety Cage. The easiest way for me to explain the changes to the safety cage is to point out that, out of approximately 14 individual cage truss assemblies that make up a complete safety cage, the GlaStar and the Sportsman have only 2 that are the same. Many individual tubes are larger in diameter and have a thicker wall; the gear sockets are beefed up to accept the new, larger gear; the rear spar pivot fittings are redesigned, the firewall truss and nose gear attach points are a new design, etc., etc. The cages look similar, but they are very different.

This should give you a pretty good idea of the scope of the changes that are incorporated into the Sportsman versus that of the GlaStar.

Empty Weight of Sportsman vs. a GlaStar. Our prototype Sportsman is fully painted (fuselage, wings, etc.) with 3 colors of base coat and a clear coat over that. Also, it has a nice IFR panel, complete with a Garmin530. Our prototype weighs 1375 lb on conventional 6:00 x 6 gear and 1400 lb on tricycle 6:00 x 6 gear. (Note: GlaStar wheels and tires are smaller and lighter!) In comparison to our Sportsman, the GlaStar demonstrator (built by Stoddard-Hamilton) weighs 1425 lb with a similar panel, a gel-coated fuselage, and NO paint on the wings or tail!

Sportsman Speed vs. GlaStar Speed. Based upon all of the flying we’ve done to date in the prototype Sportsman as a tail-dragger and a trike, we are confident that the speeds of a comparably equipped Sportsman and GlaStar will be within a few knots of one another. See our spec sheets for the actual numbers obtained to date.

Now, with all of that said, we want to make sure you all know that we think the GlaStar was, still is, and always will be, an incredible performer and fun to fly airplane. Clearly the Sportsman started with a great foundation. Yet it provides a wonderful improvement for those who desire the enhanced features and increased utility that it offers. 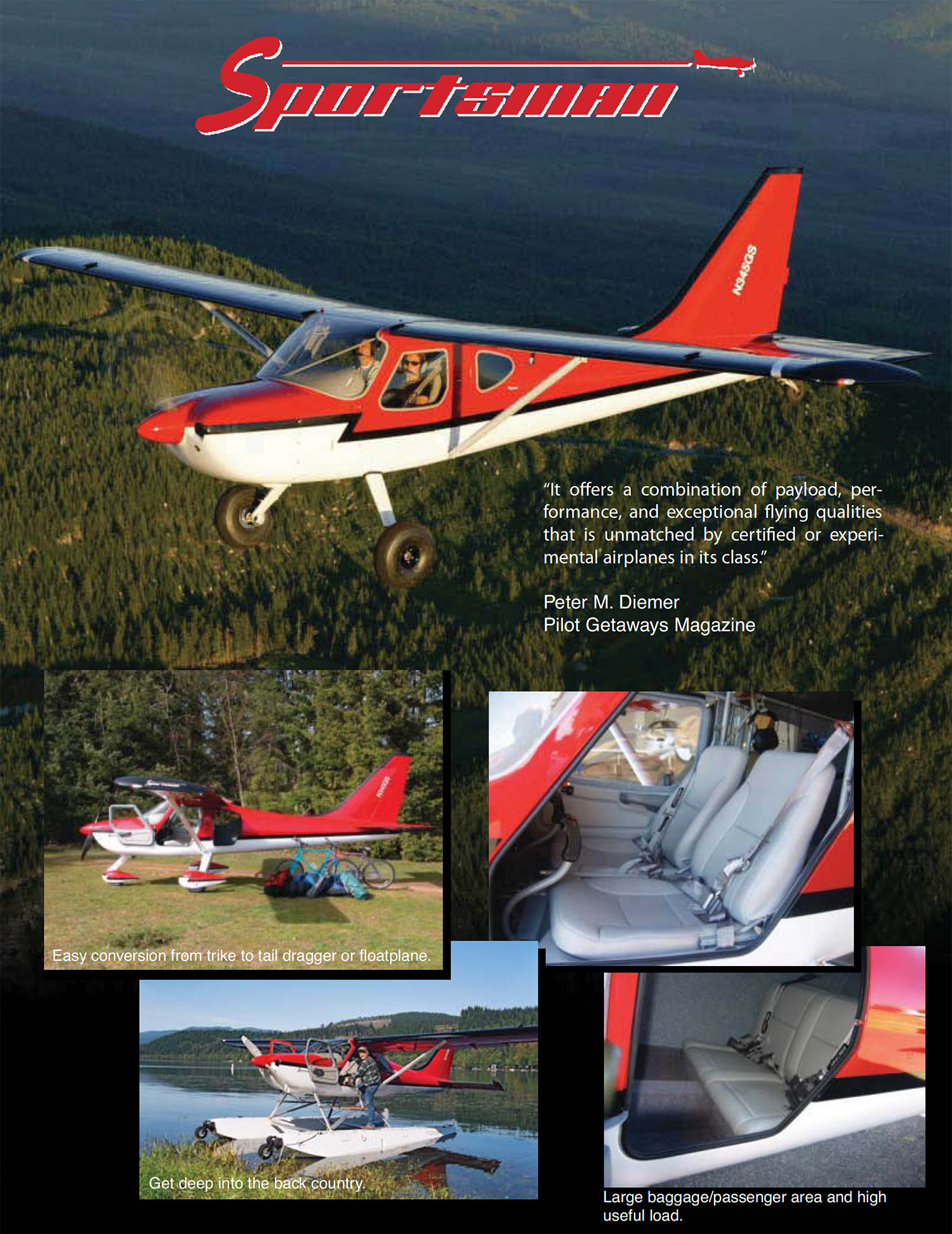