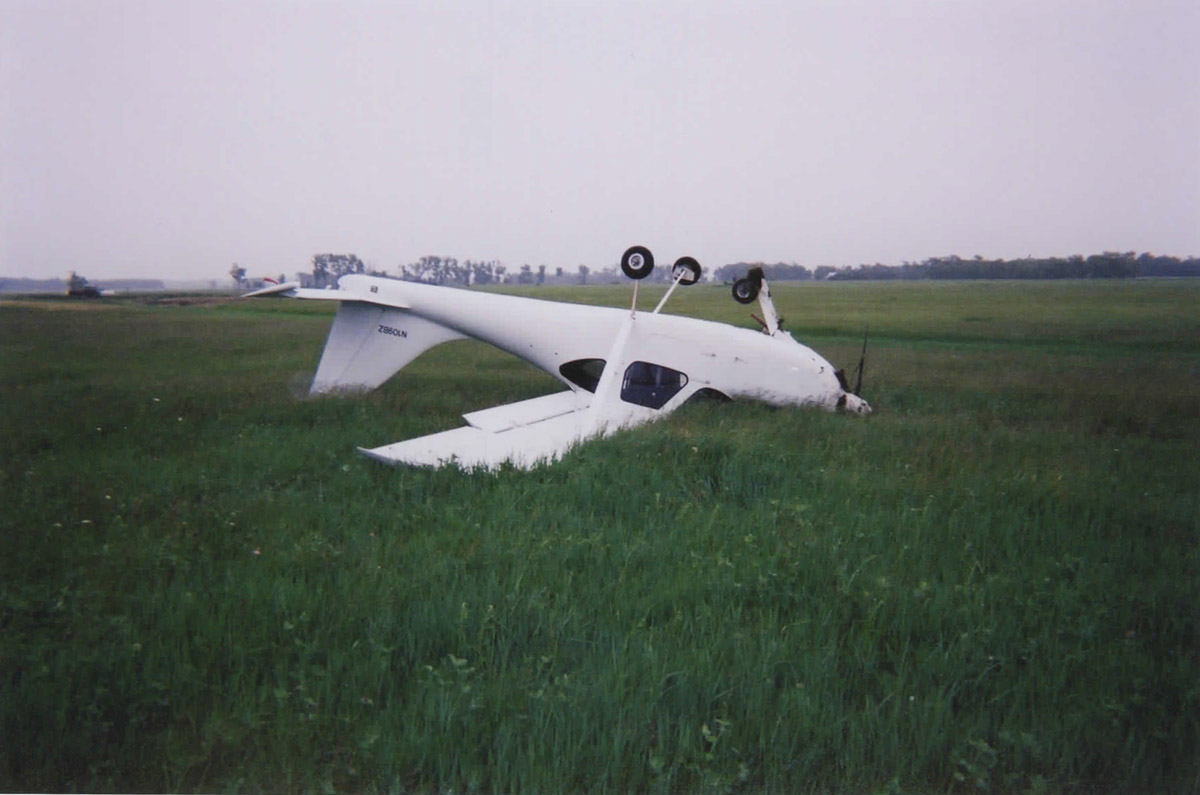 To fly above the earth, all alone, what a rush! This was my second first flight of my GlaStar.

The first one went without a hitch as well. It is what followed where my story begins.

I started assembling my kit in 1999 and finished it in 2002. My first first flight was just as much of a rush. The plane worked great but then in the following flights I would have momentary engine temperature spikes. I couldn’t find anything wrong. I played with airflow, new thermostat, no thermostat, a few other things, still no luck. Oh, I didn’t tell you, it was a converted car engine. With 12plus hours on the tach, the temperature continued to rise. That’s when I was seeing dollar signs instead of using good judgment.

Instead of landing on a perfectly good country road or even traveling a little further to my private air strip, I had to get it down now! At least that is what my brain was telling me. I landed in a meadow with tall grass and wet, soft dirt after a rainy spell. The nose wheel bent back and over I went. I unlatched the seat belt and fell to the ceiling of my once beautiful plane.

I walked home and told my wife I wrecked my plane. “No way,” she said. Yes way.

With a wrecked airplane, it’s easier to dig deep to see what’s going on. It turned out to be the serpentine belt tensioner. Most of the time it worked as it was designed to.

Then there were times it would bind and stay just tight enough so the timing wouldn’t get off, but the water pump was just lallygagging along forgetting what it was supposed to do which was to cool the engine. Knowing that, the restoration began. New wings, rudder, landing gear (tundra trike package), propeller, most of all a nice new YO-360 Lycoming. The guys at Glasair Aviation were a great help getting me going again.

The rest of 2002, 2003, and the first part of 2004 I was rebuilding my baby. That’s when another glitch came along. At the time, I was an insurance agent selling Federal Crop Insurance. It was time for acreage reports. I was calling my clients to remind them the deadline for these reports was coming. 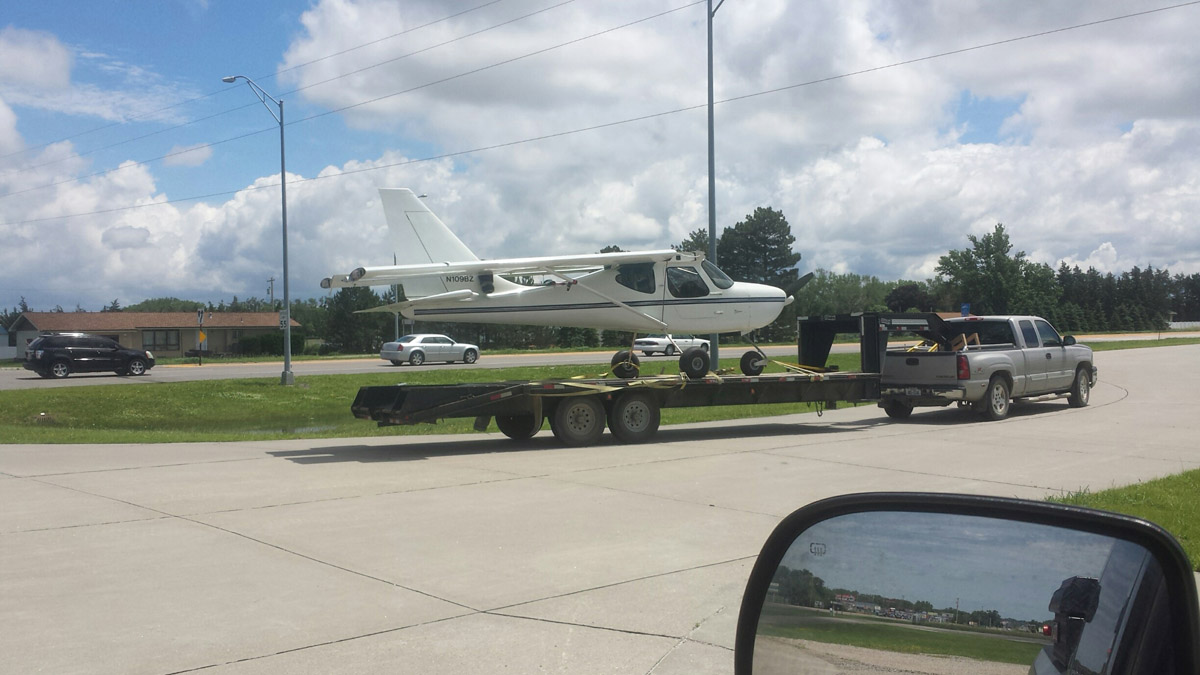 My mind went blank, I thought, “I should know these people.” A few seconds later, all’s fine. I thought, “Huh, that’s weird”. I continued on. About an hour later I took the time during my lunch break to go to the pharmacy to get a prescription for my wife. The pharmacist said, “That will be 16 dollars and some odd cents”. I’m thinking, OK, if I give her a twenty dollar bill that will cover it. From that point I don’t even remember walking back to my pickup.

That’s where someone found me convulsing. I do remember looking up at the ceiling of the ambulance thinking, “That’s different.” I had a grand mal seizure. The testing began. This was Friday, June 11th, 2004. By Tuesday I was in surgery having a centimeter by a centimeter and a half tumor being removed from my brain.

It was a grade three anaplastic gemistocytic astrocytoma, malignant. That changes everything. Not so fast, I wasn’t giving up.

Following the surgery, I had three months of radiation and one year of chemo therapy. Another three years went by, no prescriptions, no problems, the plane is done. Ready to fly again. Four years now since the single seizure had passed. The reason for the seizure had been dealt with, I should be good to go with the FAA, right?

I went to a nearby AME in 2008. I did the third class medical, sent it in with different doctor’s reports, my medical history, and included a few other reports. I didn’t get the answer I was hoping for, “Presently we can offer you no encouragement for favorable consideration.” I appealed it but got the same results.

Sometimes the reply would include, “The finding is incompatible for aviation safety.” I would go to Oshkosh nearly every year. I would always go to the FAA’s building hoping to talk to someone that could help.

Nice, nice people but they really weren’t much help though. Not that they didn’t want to help, they just couldn’t let a guy fly again that had a grade three astrocytoma.

Once again, in July of 2013, I am at Oshkosh talking to one of the doctors. He suggested participating in a cognizance test that was being put on in the northeast corner of the FAA Building. The doctor said in no way would this be used against me if I didn’t fare well. I am thinking “Government, I don’t know if I like this, can I trust them?”

So, I left the building through the west doorway, circled around and came in through the east door to take the test.

They’d never know. I started the test, did really good on the first test (according to the examiner). Second test, piece of cake.

Third test, this is easy. Then we went to the computer for the next phase of the test, the examiner asked how many hours I had flown in the previous year. “None”, I said, “that’s why I am here, to prove I am OK”.

The examiner said, “I can’t give this test to you, it is for active pilots only.” Here is where it gets good, he marched me right over to Doctor Jack Hastings (a senior neurological consultant for the FAA) and told him how well I had done, that he should take a look at my case.

Well, he did. So, again, I went to see the nearest AME, sent in the results along with doctor’s reports, MRI reports, and Dr. Hasting’s report. What? I was denied again!

From there the information went to Washington DC. I am waiting, waiting. Finally in March of 2014, a phone call from one of the doctors I had met at Oshkosh, “You’re not going to believe this, Mr. Zimmerman, the FAA has granted you a special issuance.”

The whole time while this was going on, for nearly ten years, I didn’t give up. I had my moments when I would get frustrated, but usually I kept believing I would fly my GlaStar again. The GlaStar was hangared near my home so almost every day I would walk under the right wing and touch the wing’s leading edge saying, “This is a good plane, I am a good pilot, and I have my third class medical certificate.” The three things that were in question: a plane with a bad history, a pilot with poor judgment on that fateful day, and lastly a pilot that by all appearances would never get his medical certificate back. What am I saying?

Back to the second first flight. There really isn’t a lot to say, it’s a great plane, well worth the wait. During the flight, I went up to 4,500 feet and circled, always stayed within two miles of the airport. Pressures, temperatures, controls, all where they were supposed to be and doing what they were designed to do. 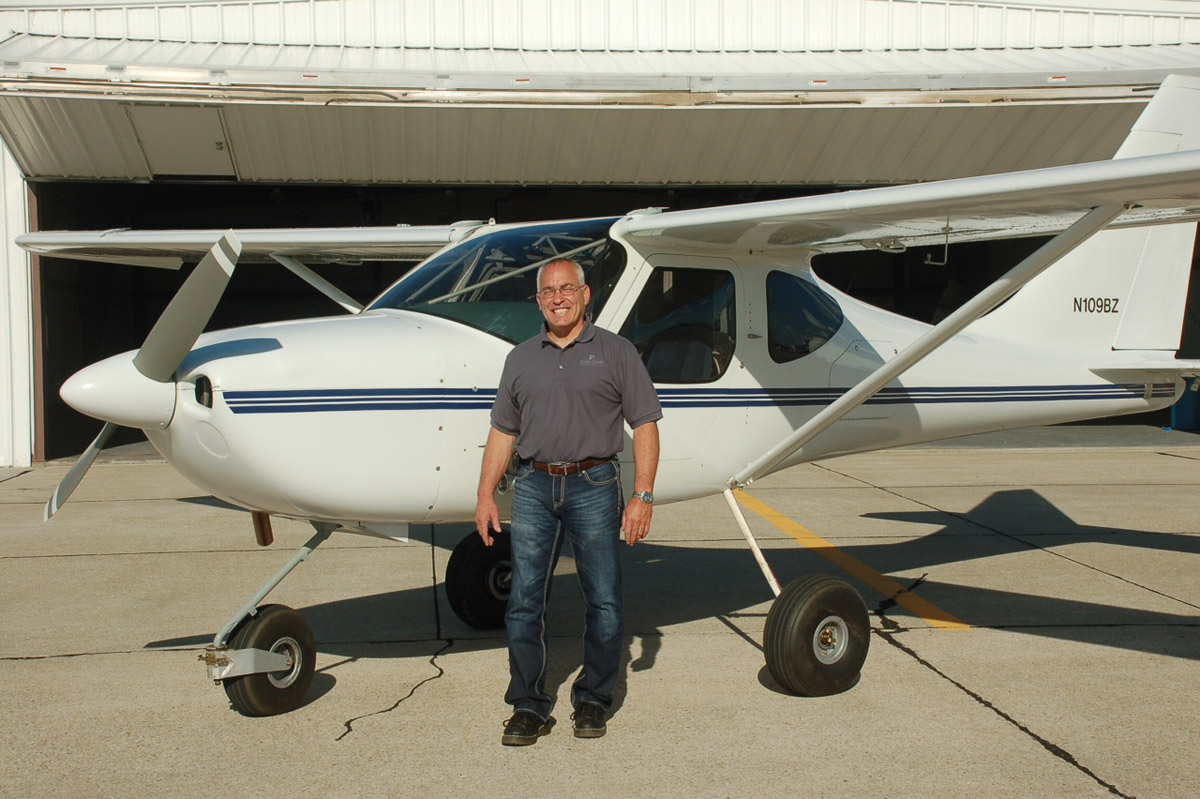 During the test flight, I was listening to the communications going on with a couple of arriving aircraft. I didn’t think much of it until I was taxiing back to the hangar. Wait a minute, those are GlaStars (technically, one was a Sportsman). Icing on the cake, not only was this the first time in about twelve years that I have flown as pilot in command and while doing my second first flight, there were two more GlaStars (Sportsman) there to greet me. Steve and Kathy Sutton had flown in from Toronto Canada. Garth and Sue Hichens had flown in from Annapolis, MD. Both couples were flying to a GlaStar/Sportsman fly-in in Smiley Creek, Idaho. They had stopped for fuel and a place to stay for the night. What are the odds?

Anyway, what a plane. Docile, fast, slow, take your pick, they all apply. This winter I’ll pretty up a few things. Namely, landing gear fairings. For now, I am just going to have fun flying!

Why We Build: Life with the Sportsman Couldn’t be Better