I have designed and built some servo tabs that can be added to the ailerons after the fact to reduce the aileron stick forces. They work like those that were made for the EAA GlaStar, but instead of re-designing the aileron to have the tab built in, these are riveted to the trailing edge after the fact. I installed them today and was thrilled at how they worked.

Previously in cruise, the aileron forces were much higher than the elevator forces, but with the servo tabs in place, the aileron forces were much lighter than the elevator forces. They work great and are easy to make and install. They even look OK. I used a 12 inch piece of 2″ hinge used to attach the elevator to the stabilizer. I cut one half down to 1/2 inch to match the trailing edge width and riveted it to the trailing edge of the aileron. I attached a control arm to the aft half of the hinge and attached a pushrod with bearings to this and to a 2 inch AN eyebolt. The eyebolt was screwed into the hole used for the wing support eyebolt that attaches the wing to the tail when the wings are folded. An aluminum tubing was used as a spacer on the eyebolt. I wanted to make a servo that could be removed without any damage to the plane if it did not work, but this is going to stay on. 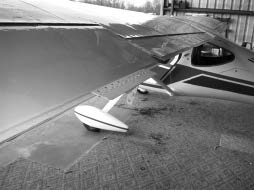 Again, an eyebolt or aluminum angle tab can be used. The rod connecting the two points ends up being about 16.5 inches long, but check yours in place on your plane to be sure. The rod length isn’t important, but the heights of the attachment points are. For the rod ends use HM-3 or equivalent (10-32 thread and hole size). The Aileron Servo Tabs and Aileron Trim rod ends are available from Aircraft Spruce. If you line the rod up so it is parallel to and directly over the inboard aileron hinge cut-out, then there won’t be any clearance problems when you have full up deflection of the aileron.

I have now installed a servo motor in the wing with a pivot arm that serves as the anchor point of the right aileron servo tab. I have a hat switch on my stick, so I now have electric trim for aileron and elevator.

I have now test flown the plane and the trim attachment works very nicely. I haven’t flown it with only one tip tank full yet (not enough time and really strong winds on test day) but my impression is that it will trim for this condition. I think the photo speaks for itself on how to make this addition.

I mounted the servo motor on the bottom of the wing inside and cut a slot for the arm of the trim hinge adapter to go through the wing. If people are interested, I can make a template for the two halves of the trim hinge adapter. They are riveted together so they fit on either side of the AN eyebolt that serves as the hinge point. It is so much fun to experiment with experimental airplanes.