Home GlaStar & Sportsman How to & Builder Tips How Much Fuel Do We Have?

Ground the aircraft and drain fuel from the wing tanks and fold the wing back.

Remove the power and ground wires and the five machine screws to remove the sending unit.

Carefully pry the float arm from the plastic rotating arm.

Examine the end of the arm that clamps to the plastic and make sure it is a tight radius bend and exactly 90 degrees. 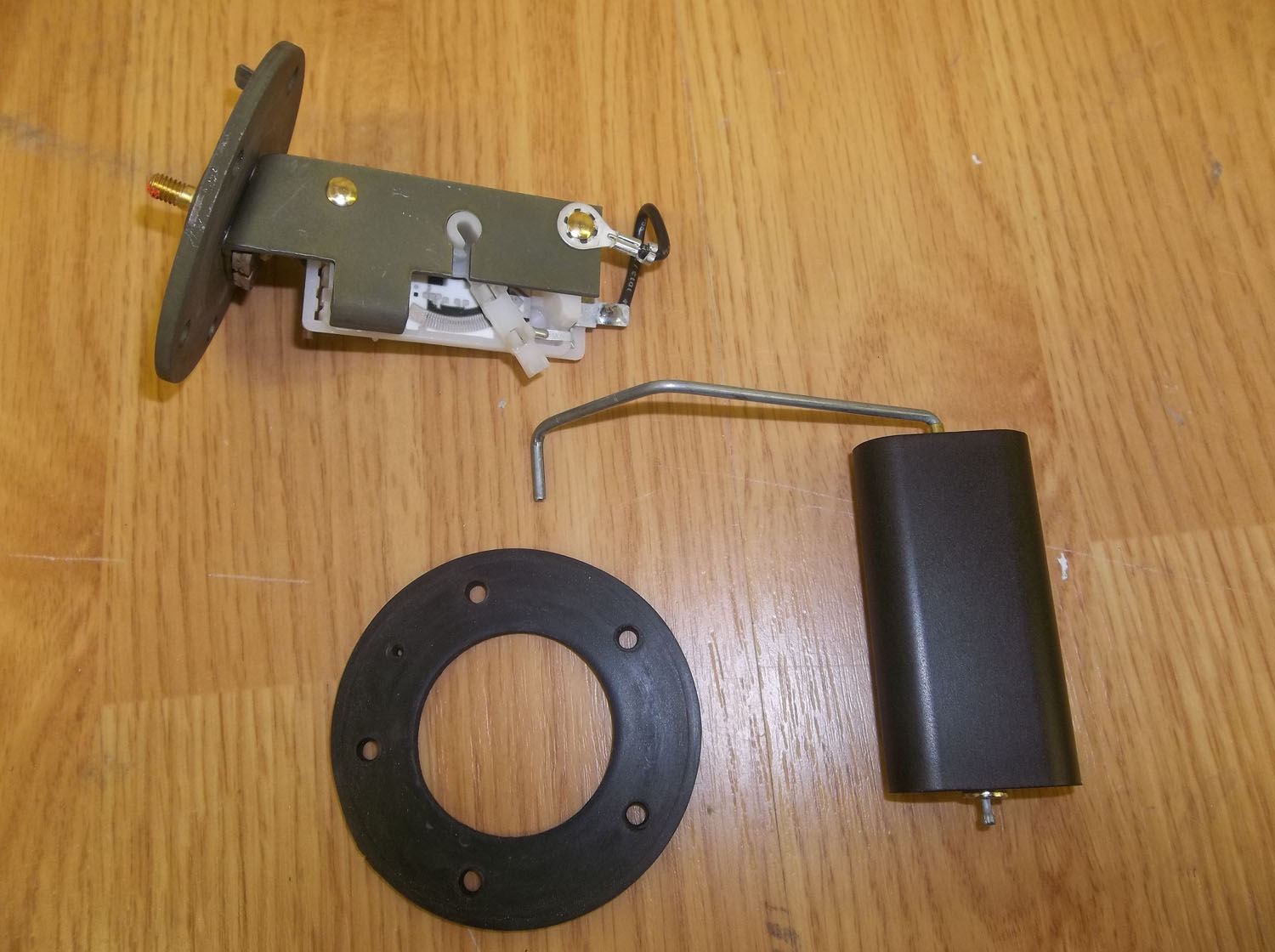 The biggest culprit we’ve found is that if the 5/8” long stub that inserts into the small hole in the plastic arm is not perfectly straight, it will bind the plastic rotating arm against the plastic housing causing the stickiness. The best cure is to shorten the 5/8” stub to 1/2” length. Reassemble the components and give it a try.

Holding the metal flange in a vertical orientation as if it were bolted to the tank, move the arm to the highest point and verify that it free falls easily with no sticking at all.

Always verify that the fuel used figure shown on your EFIS screen (based on the fuel totalizer) equals the amount you pump in whenever you fill up. If it doesn’t, you can do some simple math and a simple EFIS adjustment to get these to agree every time. The rate of fuel measured by the fuel flow transducer is displayed on most electronic gauges and EFIS screens as fuel flow in gph, gallons used, gallons remaining, etc. In the Advanced EFIS screens, fuel flow is counted in .01 gallons and called “K” factor. The standard K factor programmed into each EFIS does not always match exactly the actual gallons used, so there is a means of adjusting the K factor in your Advanced EFIS as follows: The formula can be found in the Advanced AF 5000 (or other) Series Pilots Guide and Installation Manual. You can view the manuals on Advanced Flights website or download and print them. For the 5000 series, I found the formula on page 113/114. 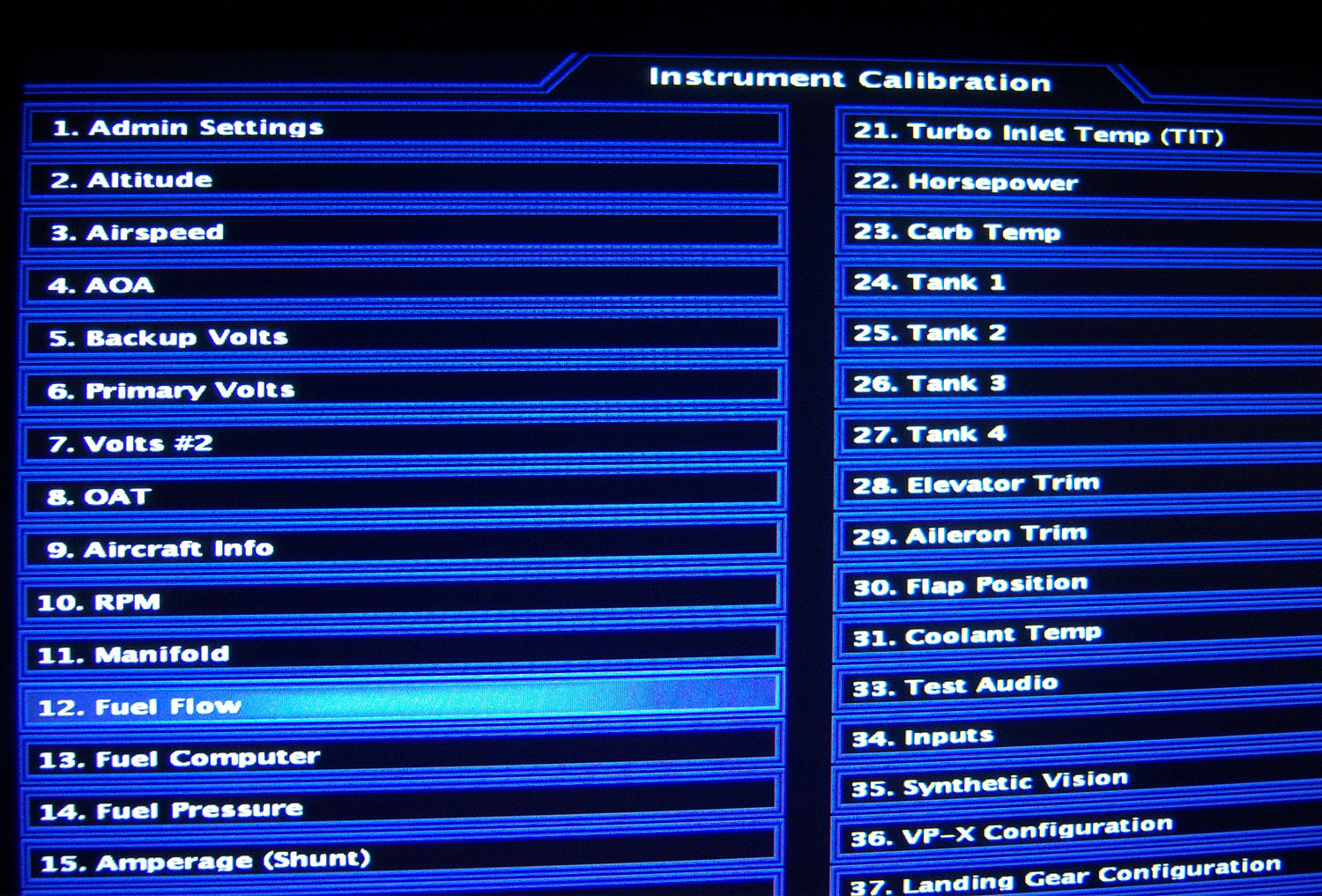 To do this accurately, make sure you fill up the plane (main tanks or all tanks) to full. Fly the plane until it needs refilling and note the gallons used amount displayed on the screen. For this case lets say it was 42.8 gallons. Then fill up the same tanks to the same full levels as before and note the dispensed gallons on the fuel pump. Lets say it was 41.3 gallons. Now, turn on the EFIS screen and select calibration mode. 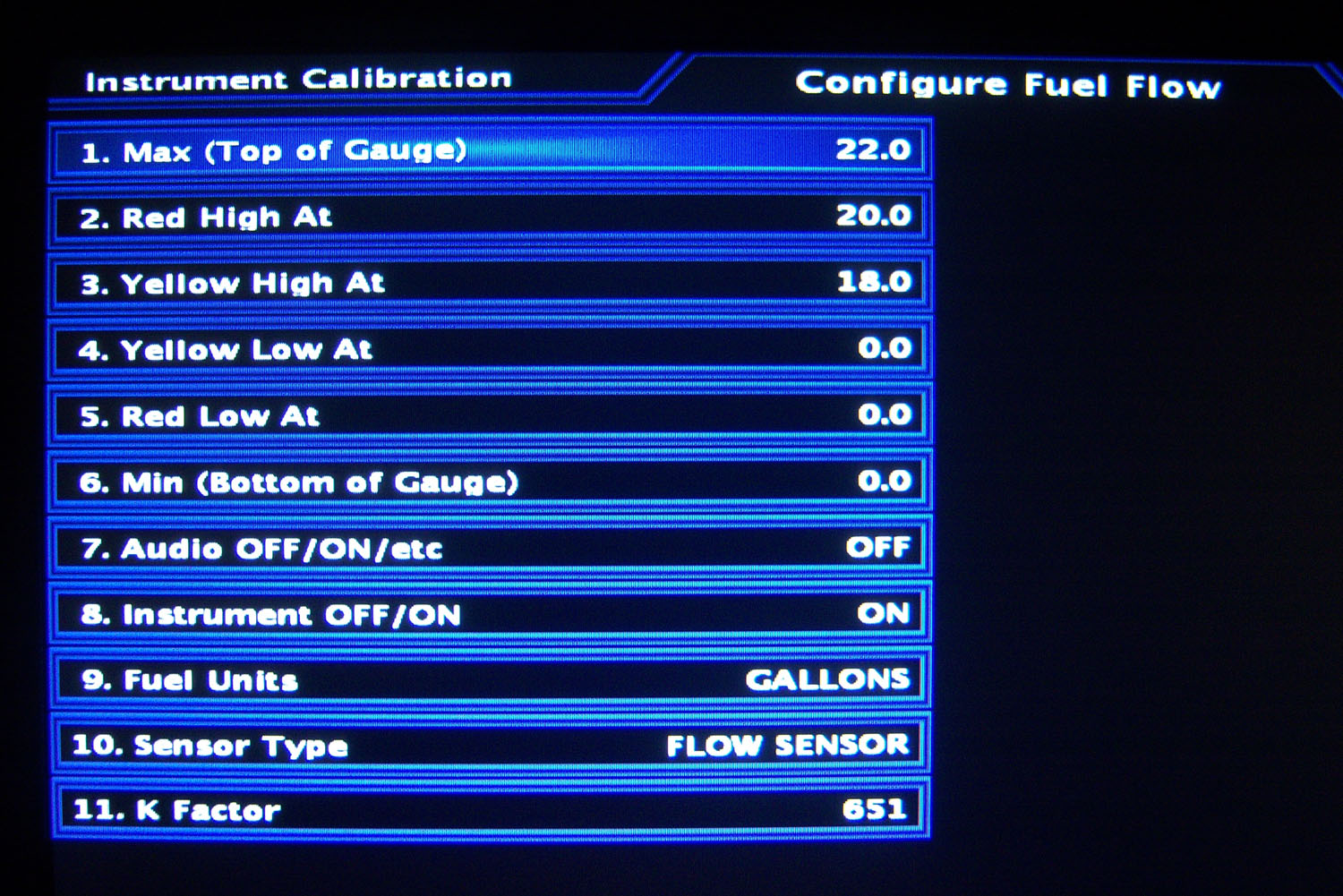 (For the 5000 series, press SET then hold down the CAL button until the Instrument calibration screen appears. Scroll to FUEL FLOW and push SELECT. ) Note the K factor value and plug it into the formula: New K factor = (old K factor) x Display gallons used / Dispensed gallons at pump.

Note: During your Phase 1 flight tests, I would suggest writing down gallons used and gallons pumped for three fill-ups and averaging the numbers together. This will minimize the possible errors of not refilling the plane quite the same each time and keep you from chasing your K factor tail.

Once you do this and gain confidence in fuel flow, you can place more trust in the gallons used or gallons remaining figure on the EFIS screen during flight. The green fuel gauge icons on the screen can be used for viewing fuel quantity in a traditional visual way, but much more trust can be made with the gallons remaining number than the gallonage shown at the bottom of the green fuel gauge columns, especially when the quantities are getting on the low end. It can be a bit unnerving when the gauge says 6 gallons remaining in a main tank and then it suddenly plummets to 2 because you didn’t complete a balanced turn with rudder.

Don’t allow your emotions to be dictated by the ever changing fuel quantities on the gauges when you can rely on the steady gallons used figure.

Final note: How can you always place trust in the fuel flow meter? Can it ever fail?

Absolutely! Always keep in mind what gph your engine burns on average and

conservatively trust your instincts over all mechanical or electro-mechanical devices. If you make a habit of glancing at gallons used on the EFIS screen when you shut down at the fuel pump and compare it to gallons dispensed at the pump, you will notice a trend if the fuel flow meter ever starts to display inaccurate information. Fly safe!